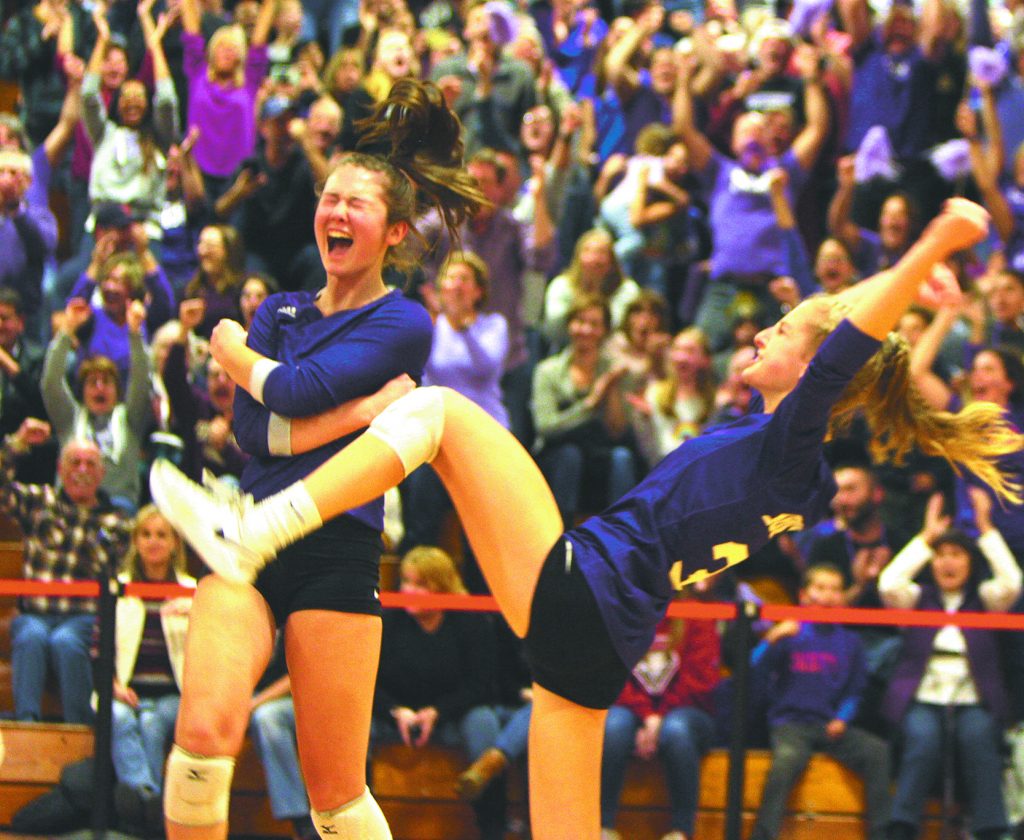 Telegraph photo by HECTOR LONGO Nashua South's Paige Garland, left, and Cara Lecklider, right, are fired up as the Panters rallied from down 21-17 in the third game to beat Dover and win the Division I state title on Saturday nght in Derry.

DERRY – After surrendering the first two sets of the postseason and tenuously hanging on, just three points from quarterfinal extinction, the Nashua South girls volleyball team took no prisoners and left no doubt.

Nine straight flawless sets later, they are the undefeated (21-0), undisputed queens of New Hampshire volleyball, grabbing their glory and their place in Nashua South history with a 25-18, 25-18, 25-21 Division I state championship win over Dover here at Hackler Gym before a packed house of more than 1,500.

“It’s been a lot of work for four years now,” said senior Kara

M-V-P throughout the finals match with nearly all of her 17 kills. “We just knew we didn’t want to go to four. We’ve been working so hard. This is incredible.”

The victory was the first volleyball title for South and the first for the city since Nashua High School won Class L in 2003.

After pretty much dominating the first two games, South understood how sixth-seeded Dover had overcome the obstacles to surprisingly reach the state finals.

The Wave played with grit and took charge in the third, holding South at bay all the way to 21-17.

A Nashua sideout put Lecklider on the service line, and she simply took over from there.

A Dover error opened the door, and that was followed by booming kills, first from Kelliher and then by Lecklider to knot things at 21-21 and force a Dover timeout.

Lecklider then served an ace, followed by a Catherine Covert block and the roof nearly came off the joint as the South student section, decked out in their best beach wear erupted.

Once again, Kelliher (17 kills) found the floor with a missile, giving South a championship point, and Lecklider sealed it, her serve too tough to handle for the title win.

“I am so shook right now. I don’t know what just happened. I’m so glad. I couldn’t be more proud of this team,” said fellow Panther senior Cara Lecklider. “We were nervous at first. Once we stepped on the court, we had a lot of energy and we just kept going.

“I love the service line. It’s something I’ll never forget.”

It was an amazing end to the storybook season that almost ended in a third straight year of heartbreak with the quarters against Bedford.

“I try not to remember (being down in the quarters 2-0),” said Covert. “It’s the trust. We have so much trust in each other. We’re so together. I couldn’t be happier. I don’t have words for this. I just love this team.”

South simply left no doubt – better offensively and defensively than both Winnacunnet in the semis and Dover here in the title match.

“Our defense and service were key. They start the whole play,” said Lecklider. “Our offense did a great job the whole way.”