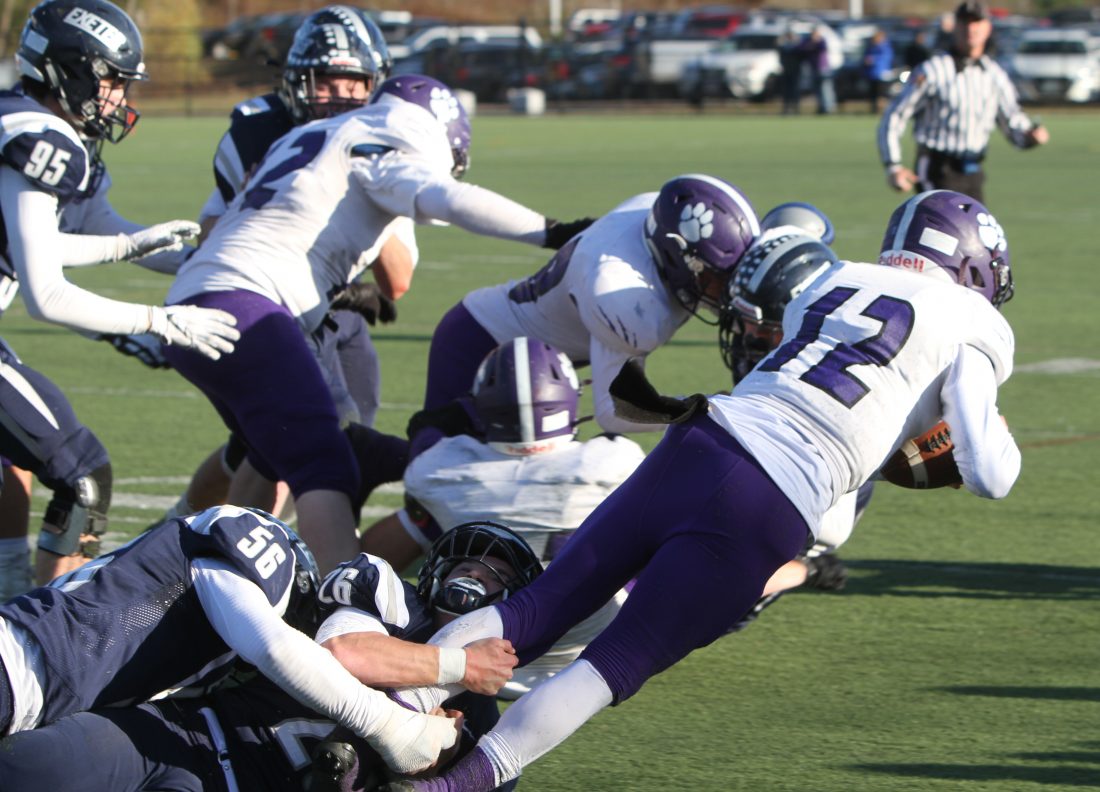 EXETER – For 48 minutes in Saturday’s Division I state football quarterfinal, it felt like Nashua South was running uphill.

Despite the Panthers’ showing, grit and skill and will offensively all day long, led by juniors Chris Keefe and Jason Compoh, they simply couldn’t catch up with No. 2 seeded Exeter, falling 42-27.

“The thing is they have great backs. Give them a little bit of a seam, they’ll make it. Miss a tackle and they make you pay,” said South coach Scott Knight, whose team dropped the regular season finale to 9-1 Exeter just eight days ago.

“We gave up six (20-plus yardage) plays alone. You can’t win a football game like that. I was happy with the way we fought. We played probably our best offense all year, we moved the ball up and down the field, special teams were solid, but boy you have to get stops, and we didn’t do that.”

Indeed, three times in the first half, Blue Hawks’ fullback Derek Edmiston (11 carries, 248 yards) took a simple inside trap and busted into the secondary, scoring on runs of 64, 20 and 83 yards as the hosts, who will tangle with Merrimack next Saturday in the semis, built a 21-7 lead at the break.

The teams traded TDs in the second half, but every time South tightened things up, Exeter answered.

“At times, we were amping it up, playing pretty good, but then we lost some big money downs.

That was what was killing us,” said Knight, whose club is now 6-4. “We’ve been good run-stoppers all year long. I didn’t see this one coming. We thought we had to score 28 to win, I didn’t think we’d give up 42, never in a million years but it happened. They played great.”

South scored on the opening possession of the second half when Keefe scooted around left end for 40 yards, and the Blue Hawks responded with a 66-yard dash by Jaedon Cliche to the 1 and a TD sneak by Ryan Grijalva.

Compoh caps a 16-play, 68-yard drive with a 6-yard TD plunge, and Exeter has Edmiston take the first play from scrimmage 59 yards for his fourth score of the day.

Even South’s last score, an all-heart, 5-yarder by Compoh on 4th-and-goal, with 4:25 left to slice it to 35-27 was deflated almost immediately when Cliche rolled 68 yards on a sweep to ice it.

Exeter has been nearly perfect in the two wins over the Panthers.

For the second straight week, veteran coach Bill Ball’s club was penalty-free, while the Panthers were flagged four times for 41 yards. Neither team turned it over on Saturday.

“They’ve played flawlessly for two weeks,” said Knight. “We played pretty clean for the most part.”

Compoh’s day was old-school, lunch-pail and inspiring. He ran for 134 yards on 28 carries with a long gain of 8. He earned every inch.

“(Compoh) is a good play,” said Knight. “I was happy with the way Keefe played. I think he threw the ball very well.”

“I thought we did a good job last week slowing him down, but we made a lot of mistakes (yesterday),” said Knight. “You make a mistake against those guys, and they’ll make you pay for it.”

South now has some time to recover before it gets back to work in preparation for the traditional Thanksgiving Eve showdown with rival Nashua North.