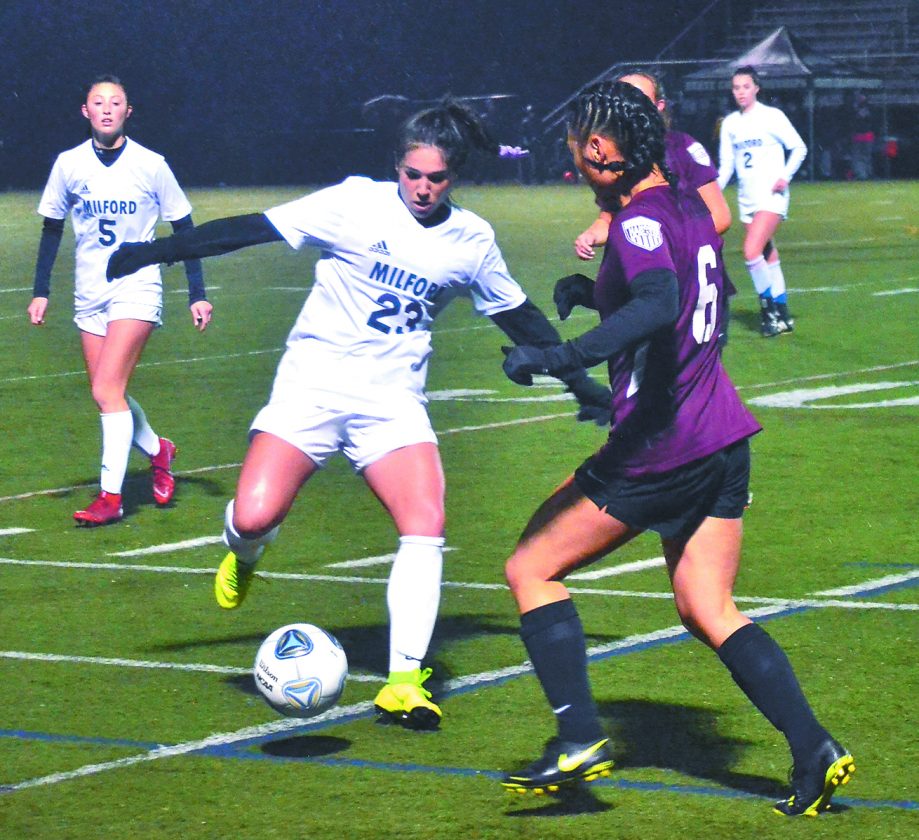 EXETER – After 80 scoreless minutes, it just took 32 seconds to end Milford’s dreams at a chance of winning a girls’ soccer title.

Milford fell 1-0 in overtime to the Marauders of Hanover on Thursday night in the NHIAA Division II Semifinals.

Neither team managed many significant chances during regulation, with the best opportunity probably coming in the eighth minute. There, Milford senior Emmy Sullivan found an incoming corner from near the penalty mark and found the crossbar, with fellow senior Aspen Tiapa immediately grabbing the rebound. Tiapa’s volley hit the left post, but an errant ricochet gave Milford another corner.

The second corner was safely cleared, and it would come back to haunt the Spartans, as other potential opportunities throughout the match were squandered much more easily.

“One of the big things we talked about was not taking bailout shots too far, we need to get into the box and take those shots closer,” said Milford Head Coach Russell Mathews. “Sometimes those shots come because you’re either looking to open the space up or nobody knows what to do with it. We had that opportunity on the post and crossbar, if we finished that things might have been different.”

Despite the lack of threatening chances, Milford slowly grew its control over the tempo of the game as time moved on, leading one to just assume the deadlock would lead to a replay of the 2018 Final, where Milford and Hanover needed a penalty shootout to decide things.

Instead, Hanover junior Sage McGinley-Smith slotted home the game-winner on a shot that found its way past the left post almost immediately after the start of the overtime period.

“There were other chances like that during the game, but (in overtime) everybody was in the right place at the right time,” said Hanover Head Coach Doug Kennedy,” Sage has a knack for being there for the key goal.”

Milford ends its year with a 12-3-1 regular season and postseason wins against Plymouth and Pembroke.