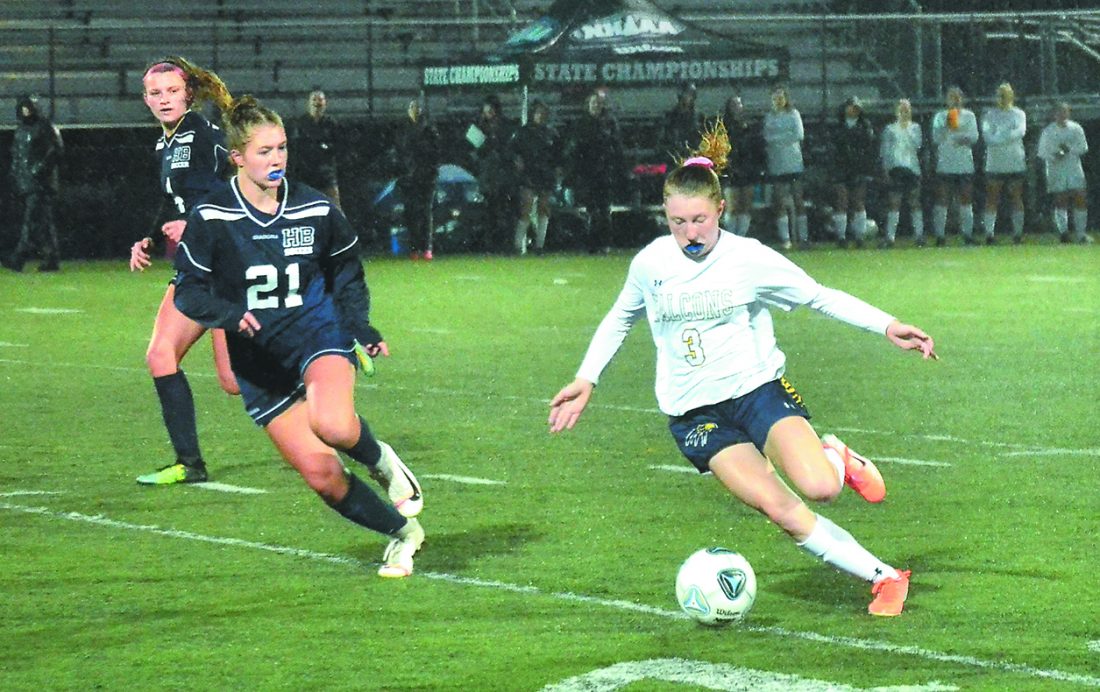 EXETER – Most folks learn early in life – and then get reminded in later years – that missed opportunities can truly hang you up. And the Hollis Brookline girls’ soccer team got stung significantly by missed opportunities in its 2-0, Division II semifinal-round tournament loss to the Bow Falcons in lousy weather at Exeter High School on Thursday night.

The second-seeded Cavaliers enjoyed some fine scoring opportunities in the first half but found themselves trailing by a goal at the halftime break. There were also some good scoring chances for the locals in the second half – with Hollis booters banging a ball off of the crossbar and then shortly thereafter one off of a goal post – but Bow potted the only goal of that latter stanza to collect the 2-0 victory on a cold and rainy night on the seacoast.

Cavs’ senior goalie Christina Balsamo stood up tall for her bunch, turning aside eight Falcons’ shots. But her teammates proved unable to get a blast past Bow senior keeper Emma Wilke, who contributed some 11 stops to her side’s momentous shutout success.

“We had a strong first half, had some good opportunities, but we couldn’t finish,” said coach Peter Clarke. “As the game went on I got the feeling that this was going to be one of those games where you wished you’d cashed in on one of those earlier opportunities. But we had a phenomenal season.”

The Cavaliers strode into the semifinal battle having gone 11-0-2 since their lone loss of the campaign to Milford way back on Sept. 16. They edged No. 7 Souhegan by a 1-0 tally in quarterfinal play to advance to the semis. So going into semifinal-round play, the Cavs’ overall 2019 record was a truly superb 14-1-2.

Third-ranked Bow, which Hollis Brookline bested by a 2-0 tally in regular-season action on Sept. 23, posted an excellent 14-2 regular season mark and nipped No. 6 Oyster River by a 1-0 score in the quarters to advance.

Their semifinal-round match started with a moderate, bone-chilling rain falling, and the rain only increased in intensity as the game rolled along. By its end, all of the players were soaked. But it was a happy kind of soaked for the Bow bunch.

Hollis enjoyed a 4-1 advantage in shots on net during the first 20 minutes of play, and the locals would finish the half with a 7-5 lead in that statistical area. But Bow wound up potting the only goal it would end up needing on this wet and uncomfortable evening with a mere 1:50 to go before the halftime break when sophomore midfielder Madison Roberge lofted a shot from just outside the 10-yard-line which soared just over the fingertips of Cavs’ keeper Balsamo and into the net behind her.

The squads parried for ball control during the first seven-plus minutes of half number two, with Bow smacking its first shot of the new stanza on net eight minutes in and Hollis getting its first shot on the opposing keeper just 1:20 later. Bow goalie Wilke deflected that shot out of bounds to give the Cavs a corner kick, but that corner didn’t produce a goal.

The locals very nearly potted a shot with 29:05 showing on the clock when senior forward Emma Ruvido booted the ball toward the cage from the left wing and it clanged off of the crossbar above Wilke and away to the opposite wing.

Bow had its second goal all lined up – it seemed – when with 22:31 to go Kristina Pizzi was stopped by Balsamo on a break-in, but the Falcon was awarded a free kick due to the actions of a Hollis defender on the play. However, Balsamo then robbed her again on the freebie, a kick right along the soaked turf directed just inside the left post.

But Hollis experienced that kind of burned feeling itself five minutes later when a sizzling shot by Rachel Brackett banged off of the post to the right of Wilke and away.

The Falcons would net a huge insurance goal off of a corner kick – with Anna Lafreniere redirecting teammate Gracie Bresson’s boot into the netting of the Hollis cage – with 9:53 to go, and the end of the Cavaliers’ excellent 2019 campaign was all but assured.