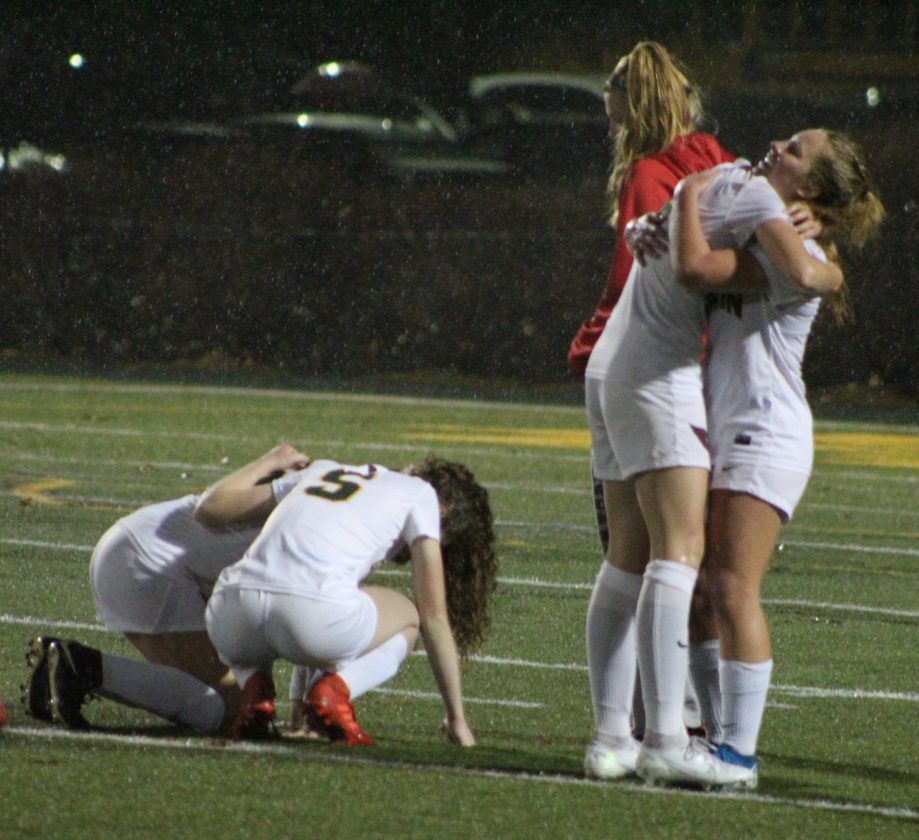 Telegraph photo by TOM KING Bishop Guertin girls soccer players comfort each other after a tough 1-0 loss to Londonderry in Thursday's soggy Division I semifinal at Stellos Stadium.

The problem was, it wasn’t enough.

The No. 3 Cardinals dropped a heartbreaking 1-0 decision at the hands of No. 2 Londonderry in a soggy semifinal at Stellos Stadium, ending an otherwise stellar season at 15-3.

Guertin trailed 1-0 through much of the second half, and the hadn’t generated much offense until there were just over seven minutes left. From then on they buzzd all over Lancer goalie Jasmine Richards, but to no avail.

The Lancers did score, however, after no one was able to in the first half. Londonderry’s Olivia Stowell dribbled in nearly untouched on a seemingly stunned Guertin goalie Erin Morris. Morris gave it a try, but had no chance about five minutes into the second half.

“It’s funny to watch,” Lancers coach Derek Dane said, his 17-1 team back in the finals Sunday at Manchester Memorial for the second straight year. “She does it all the time. If you’ve seen us play, you’ve seen that. … We don’t hide anything, you know what we’re going to do. The question is, can you stop us from what we want to do.”

Guertin did for the most part, but one shot in the first half wasn’t going to cut it. And Mulcahy warned his team at halftime that Londonderry’s speed was too prevalent.

“We were very aware that they’re incredibly dangerous on the outside, very, very fast,” Mulcahy said. “We talked a lot about it during the week, but it’s hard to replicate that kind of speed.

“She (Stowell) is a really, really good player. … They just beat us with their speed. We talked about it all week in terms of what to do, when to do it, how to do it, and we just kind of froze in the moment. It happens.”

But after 72 minutes of sloshing through the rain, the Cards realized it was now or never. Guertin striker Caitlyn Toom seemed to get a big break, going in alone on Richards and getting around her, causing Richards trip her up in desparation. It looked like Guertin would get a penalty kick, but after an officials conference, the play was ruled off-side from the start.

“It was thrilling, it was exciting,” Mulcahy said of watching that play while not questioning the call. “We played great, we played hard, we had so many chances.”

After that, none was better than a Katie Boudreau header that had Richards beat but sailed over the cross bar. Guertin also had a corner kick in the final minute.

“A little, not too, too much,” he said. “We remember playing them (a 3-2 Lancer regular season win), we’ve watched film of them, we know what they’re going to try and do. I think we were pretty good about not letting them do what they want to do. I think we limited them to three or four shots. With an offense like they have, that’s a great accomplishment.”

Mulcahy said he couldn’t have asked of anything more from his team, which graduates six seniors, but only two starters. The Cards certainly hope to be back.

“We were in the fight,” Mulcahy said. “We had chances to win it. We had a header that went over the net. We had a corner kick at the very end. The only thing you could ask for was a goal.”

And the answer, unfortunately for the Cards, was no.