Cougars back in the finals with 2-0 semifinal win 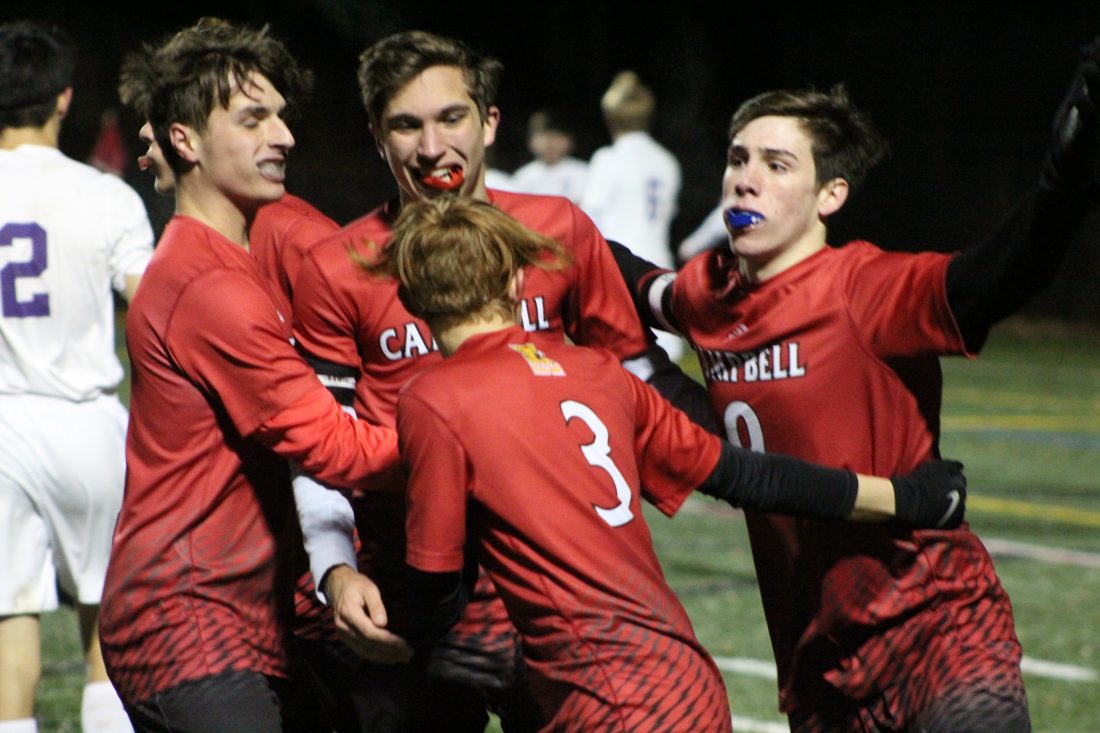 Telegraph photo by TOM KING Campbell's Joaquin Heller, right, celebrates his goal with his teammates that gave the Cougars a 1-0 lead over Mascoma Valley in Wednesday night's Division III semifinals in Laconia.

No, the way the 17-0-2 Campbell High School Cougars are playing in this Division III boys soccer season, it’s tough to wager against them.

They used PKs last year in the semis and finals to capture a championship, but this year seem so skilled they don’t appear to need that method to pull off another title. Wednesday night they rode two first-half goals en route to a 2-0 semifinal win over No. 5 Mascoma Valley at chilly Bank of New Hampshire Stadium.

“We knew when playoffs started, it was a totally different season,” Cougars senior Joaquin Heller, who scored the game’s first goal, said. “At this point, any team could come to the Final Four. We just stick together, we know we’ve got that mission, and we’re working on it.”

The Cougars clearly have their eyes on the prize, as they just kept attacking from the opening kickoff last night. As a result, they’ll now face No. 3 Mascenic (17-2) here Sunday at 6:30 p.m. in the finals, going for their second straight.The Vikings beat No. 7 Hopkinton, 2-1 and did need penalty kicks to do it, with a 3-2 edge.

And, not surprisingly, the Cougars beat Mascenic 2-0 during the regular season.

“We’re fast,we’ve got some very fast kids,” Cougars coach Bill Miller said. “But it’s really the guts, if I can say it that way. That sums up the effort.”

Campbell began attack the Mascoma net from the onset last night, and finally broke through when Heller converted a pass from David Latsha for the game’s first goal 11:02 in. Heller settled the ball and beat Royals netminder Connor Thompson (seven saves), who barely got a piece of it.

Nearly 10 minutes later, Cougar Sam Gomes scored a pretty goal in motion, back-heeling the ball into the net off an assist from Tyer St. Onge to make it a 2-0 game.

“They’re very fast, they are relentless, that’s a great word for it,” MV coach Keli Green said. “They’re No. 1 in the state for a reason.”

“We were fighting a flu bug, and these young kids came through,” Miller said.

Campbell’s defense was so active Cougars netminder Jack Noury only had to make three saves. Meanwhile, the Cougars had a defensive challenge, as Mascoma sophomore Ben Seiler came in with a whopping 32 goals and left last night with zip. The Cougars placed Heller on him after his goal, and it did the trick.

“He’s a basketball kid,” Miller said. “No. 13 (Seiler) is a consumate striker. We asked him to score, and we asked him to play defense, and we did it, right?”

Yes, and without penalty kicks, which the Cougars practice every day.

“All that practice down the drain,” Miller said with a wink.

At least for this one game.