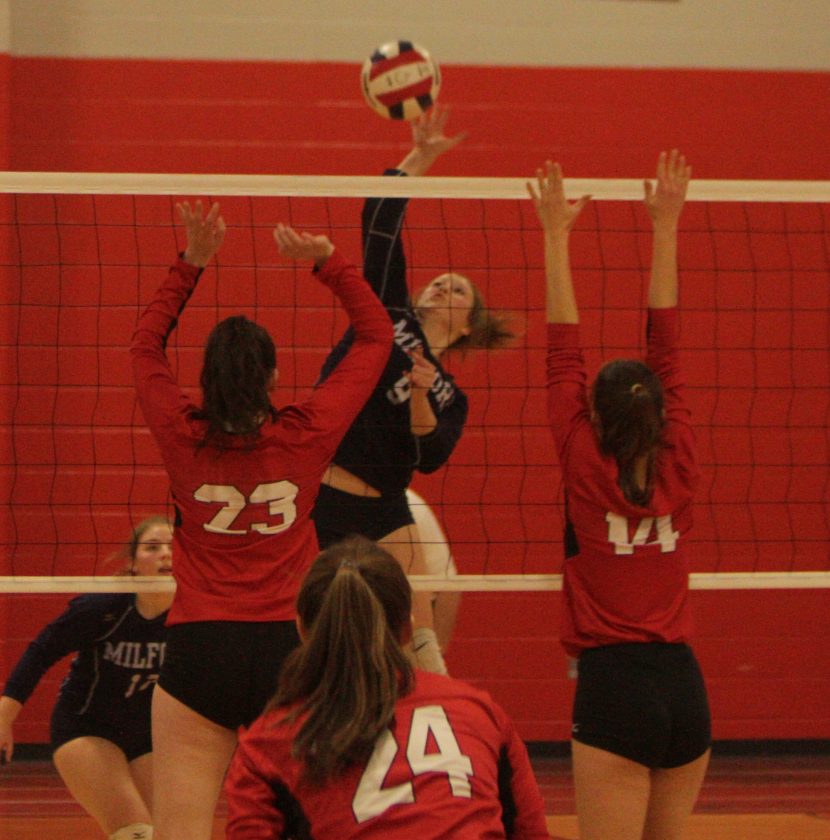 Telegraph photo by HECTOR LONGO Milford's Robyn Krafft beats the Coe-Brown double-block at the net for this kill. The Spartans never got it going, though, and fell to CBNA, 3-1, in the Division II state semifinals on Wednesday night.

Coe-Brown Northwood Academy made life difficult for the Spartans the rest of the night here at Hackler Gymnasium.

Monico pounded the ball in Game 2, allowing the Spartans to run away in the most dominant game of the four.

But the momentum was

Monico was again everywhere in the pivotal third but Milford, despite knotting things at 17-17, couldn’t close the deal.

“I don’t know why. It was close, but once Coe-Brown pulled ahead, they had all the momentum,” said Malafronte.

“My girls kind of sunk back into that tentative mode. Everyone was just off.”

The Black Bears took no prisoners in the fourth, moving ahead 11-5.

Robyn Krafft and Brianna Arnoldy (seven blocks, three kills) played their best volleyball of the night in the fourth, but as hard as they battled, the climb was too much.

Setters Kaydee Mann (16 assists, seven kills, four digs) and Kailyn Chamberlain (13 assists, 12 digs) gave it all they had in their final matches.

“I lose six seniors. I lose Gabby. She’s a dominant player, and we’re going to miss both of our setters, Kailyn and Kaydee,” said Malafronte. “Kaydee is amazing. She’s had such a turnaround this year and become so valuable. I’m not going to lie, though. The future looks bright. We won the JV tournament, with a lot of talent coming up. And we finished today with two sophomores (Stella Crosby and Izzy Unsworth).”

Coe-Brown, which fell in the teams’ regular-season meeting by the same 3-1 score, move into the finals with a 14-5 mark. The Bears will meet top-seeded Gilford in the finals on Saturday night at 5 p.m., before Nashua South and Dover meet here in the Division I title game at 7 p.m.

Gilford is 18-0, beating Coe-Brown in straight sets twice during the regular season.