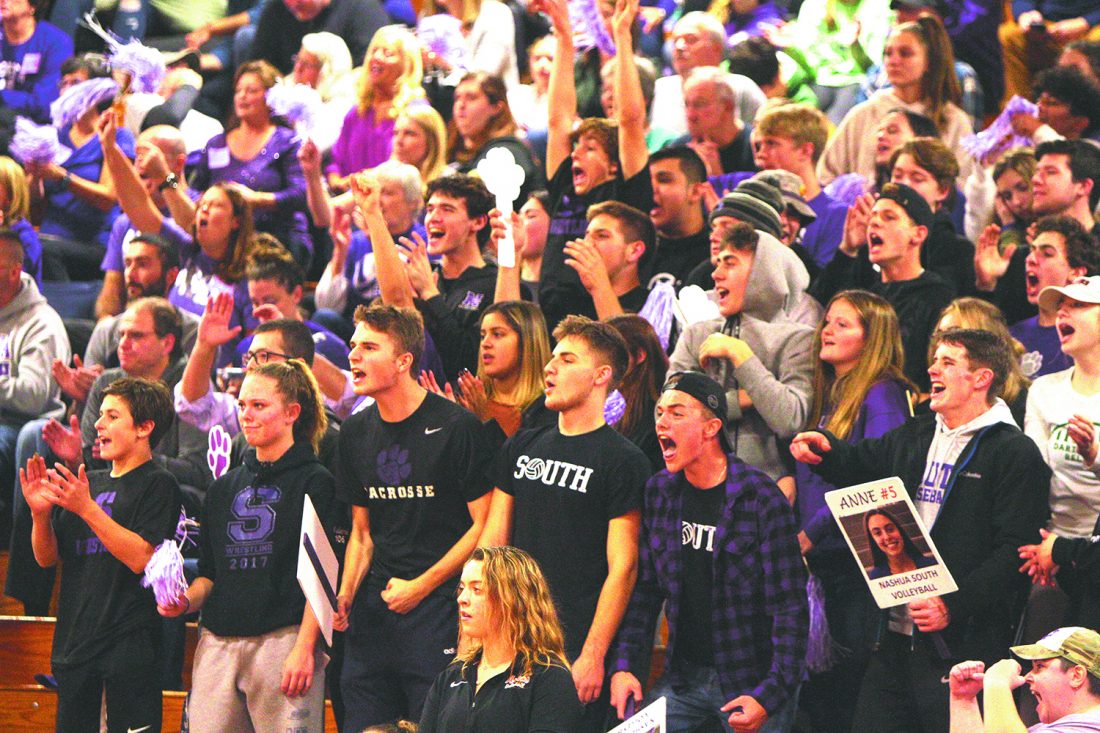 Telegraph photo by HECTOR LONGO The Nashua South student section is fired up as the Panthers dominated Winnacunnet on Tuesday night in the Division I state semifinals, 3-0, volleyball win.

DERRY – The Nashua South volleyball program that was ousted early in back to back years on Halloween night simply does not exist anymore.

These are the Panthers of 2019, focused on perfection and refusing to ever relent as evidenced Saturday night in their marathon quarterfinal survival effort against Bedford.

Tuesday night’s Division I state semifinals had a lot more to do about power and precision than drama.

Top-seeded and still unbeaten South smothered No. 5 Winnacunnet from the first serve to the last, rolling into the school’s first-ever state girls volleyball final with a 25-18, 25-18, 25-18 victory.

“Against Bedford, we were three points away from going home in the quarterfinals, so we don’t talk about (the past),” said Nashua South coach Wayne Siejkowski.

“They were joking this week that champions never panic. There’s a little truth in that. What they went through, to fight through that, to survive that, to have pride in what they did. I think it does help them.

All three games in this one played out similarly.”

The teams battled evenly for a stretch until a Panther, or Panthers, got hot.

In the first, it was Catherine Covert and Kaitlin Fitzgibbon from the service line, whose deft work turned a 5-5 game into a 16-6 runaway. And when things got a tad bit dicey at 21-16 South, it was senior Kara Kelliher who slammed the door shut with one of her missiles from the left side.

“We’ve been pretty pumped coming into this game. We had a little bit of nerves, but mostly excitement,” said Kelliher. “We have a lot more confidence than last year. You always worry a little bit in the back of our heads, but it wasn’t on Halloween this year, so we thought this is our year.”

Game 2 stayed tighter, longer, until it was 21-18 South. Enter Natalie Boyle, who rattled off three straight aces and senior Cara Lecklider, who closed things out with a booming kill of her own.

Kelliher and Co. smelled the finals in the third. The senior served five in a row as South assumed control at 13-5. Everywhere Winnacunnet looked, Kelliher had the answer and South closed it out without a threat.

“I never want to do anything else but this,” said Kelliher when asked about the urgency in this one. “Our defense is very good, we’re good at covering and picking up balls.”

“We knew she is really, really good,” said Siejkowski. “We knew, if we could force them to maybe get out of their typical rhythm and keep her from setting the tone, it would put us in a pretty good position.”

South simply had too many weapons.

“Paige Garland, my right side, had a fantastic night up in the front row,” said Siejkowski. “Kara, Cara, Catherine, they all did too, but Paige elevated her game. Her hitting was phenomenal.”

And so now, it’s all up to Saturday night’s title game with Dover here at 7 p.m. for 20-0 South. The Panthers took the regular season match by a 3-0 score over the 15-5 sixth seed.