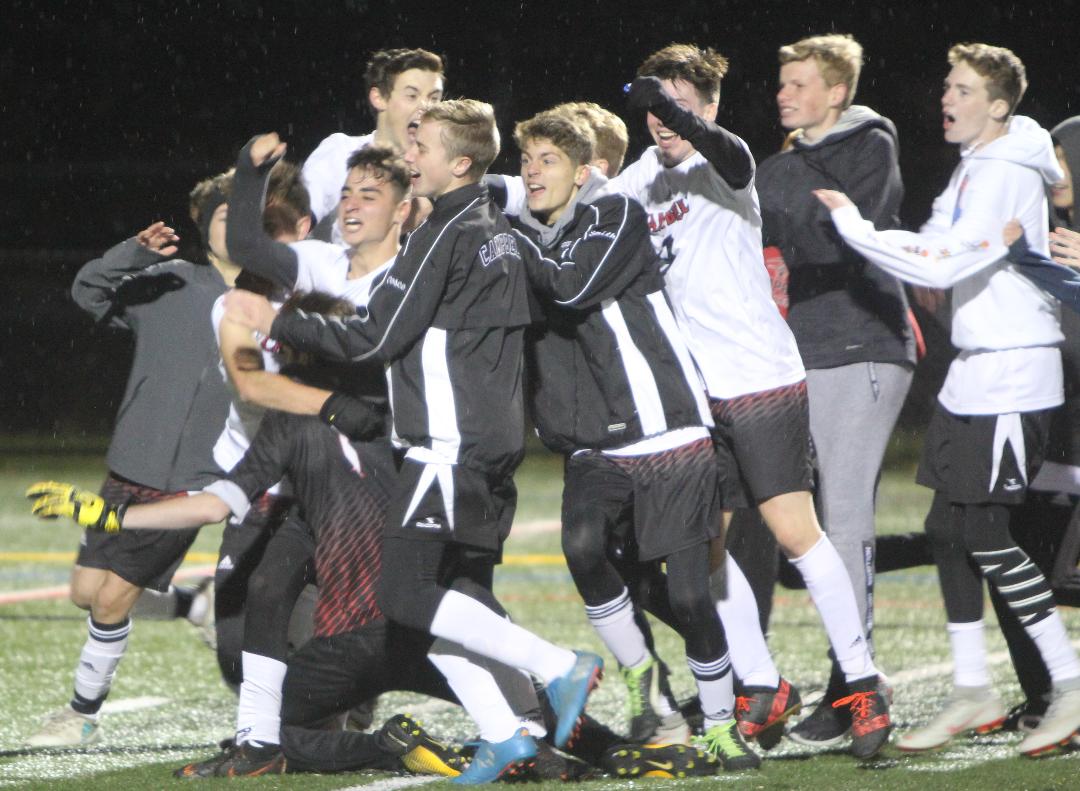 Telegraph photo by TOM KING This was a celebration scene after the 2018 Division III semis that the Campbell boys soccer team hopes to repeat on Wednesday in Laconia vs. Mascoma Valley.

There were no apparent surprises on Monday when the NHIAA announced its football pairings.

And now, while we say good-bye to field hockey for another year, football officially steps in to join the tournament fray in Week Three of the postseason. Soon, it will be all that’s left.

Here’s what’s on tap locally for all the high school sports as we begin the football playoffs and have a busy week in the other sports leading up to those:

It will be a rematch of the West Conference champion Titans’ 31-19 win over the Tomahawks two weeks ago, but one that cost them, at least temporarily depending on what tests show, the health of dynamic QB-DB Curtis Harris.

Third seed Nashua South (6-3) , meanwhile, heads to Exeter next Saturday at 1 p.m. for a rematch with the East Conference champion Blue Hawks from last Friday’s 30-14 Exeter win. Not only do the Panthers have to avoid the mistakes made Friday – mainly giving Exeter a short field – they have to do it at Bill Ball Stadium, where the Blue Hawks are highly successful, especially in the post season.

Overall in the division, the possible favorite appears to be Londonderry, which mowed through opponents all season. The Lancers’ closest game was a 16-point win over Salem.

If you look at regular season matchups, the Spartans-Broncos one is must see. It comes on the heels of this past weekend’s 28-27 Milford victory, so it’s another immediate rematch.

Want another? The Sabers lost to Bow 41-31 this past weekend. The Cavs and Eagles, though, did not play each other.

Finally, in Division III, Campbell begins its quest to get to its third straight state title game. The No. 3 Cougars (8-1), whose only loss was to Trinity, Saturday will host No. 6 Stevens (5-4).

The finals this year in Divisions I, II and III are on a Sunday, Nov. 24, not a Saturday, at UNH’s Wildcat Stadium. UNH has a home game that Saturday vs. Maine.

Here’s a look at what’s ahead for the non-football sports.

Thursday is the day. In Division I, Bishop Guertin (No. 3, 16-2) will have its third straight tourney game at Stellos Stadium, this time its biggest challenge vs.No. 2 Londonderry (16-1) at 4 p.m. The Lancers beat the Cards 3-2 back on Oct. 17 in Nashua, so expect a great rematch.

“Londonderry has been one of the teams to beat all year,” Guertin coach Pat Mulcahy said, noting his team, led by freshmen Katie Boudreau and Brooke Paquette plus junior Caitlyn Toom, began the game well against Londonderry then faded. “Obviously now there’s very, very little room for error. We can’t play for 40 minutes and expect to win. We have to play the full 80, for sure.

“You have to win those 50-50 balls,” Mulcahy said. “It’s not easy, it’s scary, you just have to be brave, be courageous, and go get it. Thankfully our girls do a really good job of getting those loose balls. They’re crucial, so important at the high school level.”

Division II has two locals. No. 4 Milford (14-3-1) gets its rematch with No.1 defending champion Hanover, now 16-0, at 6:15 p.m. at Exeter’s Bill Ball Stadium – except its in the semis, not the finals. Last year Milford lost to the Marauders in the title game in pnalty kicks.

Anyone up for a trip to Bank of New Hampshire Stadium in Laconia for the Division III semifinals on Wednesday? The No. 1, 16-0-2 Cougars from Campbell sure are.

They won’t get a semifinal rematch with Belmont, which they won in penalty kicks last year. Instead it will be No. 5 Mascoma Valley (14-4), and the two teams haven’t played.

Cougars head coach Bill Miller got a good look at MV when it squared off vs. Prospect Mountain a couple of weeks ago.

“They’ve got a strong striker, strong fullback and strong goaltender,” Miller said. “We’re so happy and proud to have lost 10 seniors (from last year’s title team) and have the younger guys come through like potential champions.”

Campbell has a lot of young talent – for example, freshman Sam Gomes has 20 goals and 14 assists, and he’s just one of many.

If there’s a problem, it’s health. The team has been bitten by the flu bug, including 15-goal scorer David Latsha. But Miller has plenty of depth to overcome it. The winner gets either

There are three locals and one is in action tonight – Division I’s top seed, No. 1 Nashua South, which is having a fantastic year (19-0).

The Panthers staged an incredible rally several times over vs. Bedford in a quarterfinal for the ages on Saturday night, and as a result will face No. 4, 15-5 Winnacunnet at 7 p.m. at Pinkerton Academy’s Hackler Field House.

The Panthers, who were upset by Bedford in the semis a year ago, are clearly the team to beat now that four-time defending champion Hollis Brookline has been KO’d., as has No. 3 seed Pinkerton. South swept the Warriors 3-0 earlier this season. In the other semi,

it’s a battle of two lower seeds, No. 6 Dover vs. No. 7 Portsmouth. The Clippers vanquished the Cavs Saturday night with an incredible rally after having been beaten in the first two sets.

So who knows? South will be seeking the school’s second girls state title since The Split (girls lacrosse in 2007) and just the eighth South title overall.

There’s more volleyball at the Hackler on Wednesday, as in Divison II No. 2 Milford (17-2) takes on No. 6 Coe Brown-Northwood at 5 p.m. in a semi. The Spartans beat CB 3-1 at the end of September, and looked great in their quarterfinal win over St. Thomas the other night.

“We know they are a strong team,” Milford coach Mia Malafronte said of CB. “Beating John Stark just shows exactly how strong they must be.

We will have to work hard and play smart if we want to advance.

“If we can play the way we played against St Thomas on Saturday, nothing will stop us.

The girls were on fire, executing plays and running at the top of their game.”

In the other semi, No. 1 Gilford and No. 5 Plymouth tangle at 7 on Wednesday. They just happen to be the two teams that beat the Spartans in the regular season.

Finally, in Division III, seventh seed Campbell has risen through the ranks and will face No. 6 Mascenic (both 13-5) in a surprise semis matchup Wednesday at Plymouth State University at 5 p.m.

The Cougars have won seven in a row and will be looking to avenge a 3-0 loss at mid-season, which came in the middle of a five match losing streak.