Cards survive a Division I quarterfinal joust with Central 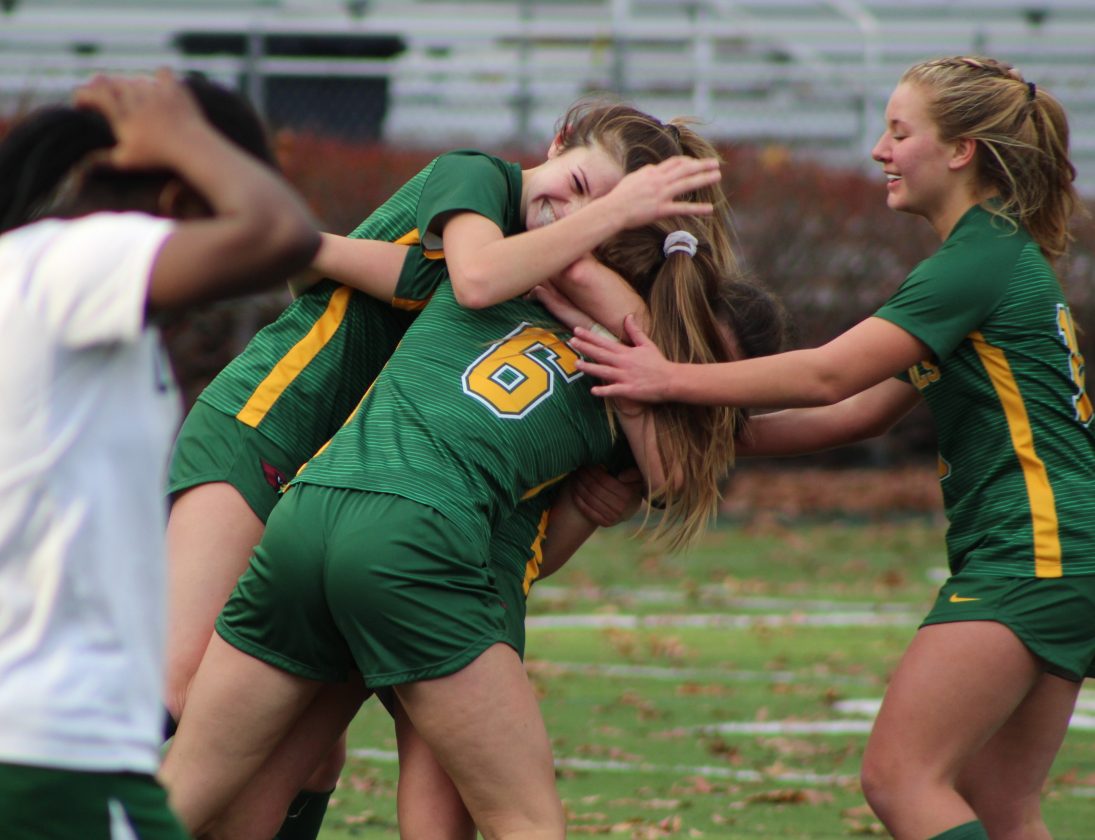 Telegrah photo by TOM KING Bishop Guertin's Brooke Paquette (6) gets a big hug from teammate Katie Boudreau after scoring the Cards' first goal, much to the dismay of Manchester Central's Nadege Masumbuko in a 2-1 Division I quarterfinal win Sunday at Stellos Stadium.

NASHUA – They had two goals disallowed for goaltender interference.

Their coach received a yellow card out of frustration at the officials’ calls.

Their opponent had a free kick from some 20 yards out with 30 seconds to play, seeking the game-tying goal.

Yet somehow, some way, the Bishop Guertin Cardinals survived all of that mayhem to emerge with a hard-fought 2-1 Divison I girls soccer quarterfinal win over Manchester Central Sunday at Stellos Stadium.

“It was very hard, obviously,” Cards coach Pat Mulcahy said, his team having punched its ticket to Thursday’s 4 p.m. semifinal at Stellos vs. No. 2 Londonderry, a 7-0 winner over Goffstown. ” I really liked our girls resiliency. Obviously we had few moments of adversity, but our girls were just mentally tough and they responded well.”

How tough? In perhaps the most physical game of the year, Guertin took just two minutes to get what proved to be the game winner after the No. 6 Little Green (12-4-2) had tied the game at 1. Freshman Katie Boudreau fired a a spinner that went off the fingertips of Central keeper Jessica Lewis (seven saves) into the net in the 51st minute.

“When they scored, it fired me up,” said Boudreau, who got a great feed from fellow freshman Brooke Paquette, who had BG’s other goal. “I just wanted to get it back. I just wanted to show who was more – who had this game. This was our game.”

That wasn’t completely evident until Central’s Victoria Keyes fired a blast into a wall of BG defenders on a free kick well inside of a minute remaining. That was Central’s last gasp in a brilliant fight to the finish.

The Cards felt they should have had two goals early on, both taken away by officials calls. But with just under three minutes left in the first half, Paquette converted a Hannah Lord free kick to give Guertin a 1-0 led it took into halftime.

“It’s just the way it goes sometimes,” Mulcahy said. “I needed them to focus on what they could focus on, I’ll talk to the referees, don’t waste any unnecessary energy on things they can’t control. Our girls did a great job responding.”

Central’s began the second half with a ton of momentum down the wings, but they tied the game with a play up the middle, Megan Harris feeding Darby Bailey who fired a rocket that Cards goalie Erin Morris (five saves) had no chance on at 7:38 of the second half.

“She’s been awesome,” Mulcahy said. “She’s our leading scorer for a reason, always in the right spot. And most importantly, she’s fearless.”

One more response was needed after BG’s Delaney Ramalho was called for a hold on Central’s Nadege Masumbuko with about 30 ticks left. Boom, the ball hit a wall of Cardinal bodies and went the other way on Keyes’ kick.

“The girls responded well, they blocked it,” Mulcahy said, “and that was the end of the game.”

But not the end of BG’s season.