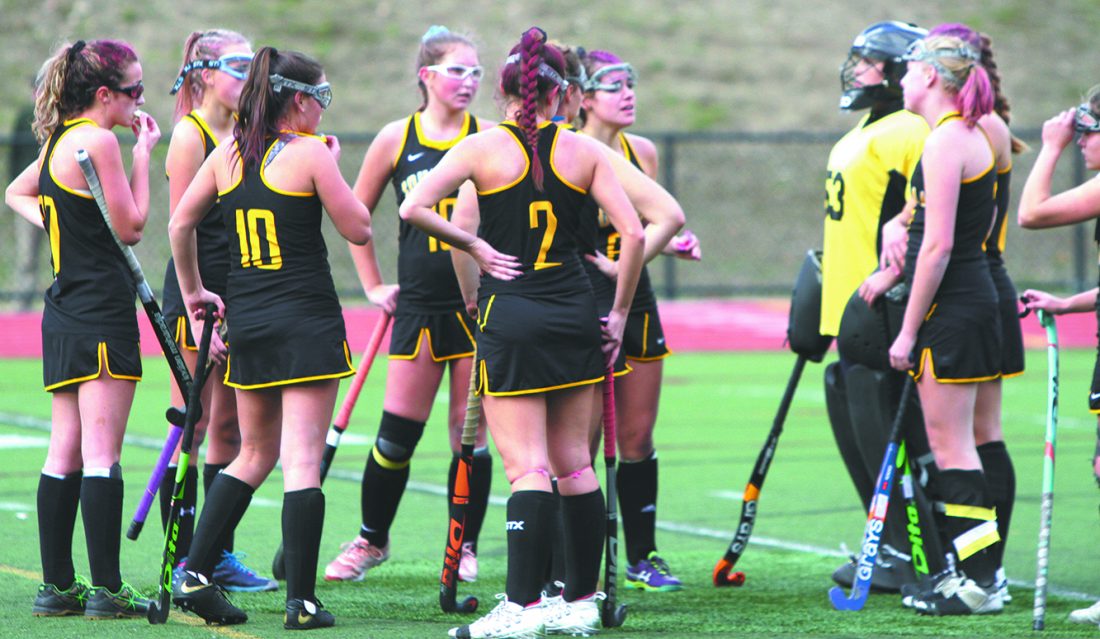 Telegraph photo by HECTOR LONGO Souhegan goalie Ellie Byram tries to rally the Sabers in the second half of Sunday's loss to Hanover in the Division II state finals.

It was also the most physically and emotionally draining ever, 80 minutes of field hockey on the brink plus the most nerve-wracking of shootouts. The fourth seeded Sabers paid the price for it less than 48 hours later, falling to No. 2 Hanover in the NHIAA championship game here at Bedford High School on Sunday afternoon, 3-0.

“We left a lot of it at the semi, a game that goes that deep. One day in between these two games is rough,” said Sabers’ coach Kelli Braley, whose semifinal was held back a day due to weather this week.

“We were together last night but didn’t touch balls, which I don’t think we necessarily needed to. We had just spent 80 minutes doing that the night before.

“They were gassed and the experience Hanover has being here three times plays to their advantage as well. Their veteran corps has been here, knows what to do here and how to win here.”

Souhegan got off to a great start and played well through the early going. But it changed rapidly.

“I saw it a lot in the first half. We controlled that first 15 pretty decently,” said Braley. “Then I saw the fatigue set in.That’s when the tide turned a little bit. We weren’t doing the small things.”

Hanover took advantage. After not allowing a ball into the net against Derryfield, Souhegan trailed 1-0 in the 22nd minute on a Katherine Blaisdell goal.

“Huge, it really took the wind out of our sails a little bit, even though there was so much hockey left to play,” said Braley. “When that first one went in, collectively it was like an uh-oh situation. And still this is a season where we really didn’t give up a lot other than those last four (regular season) games when we were injury-riddled.

“When you’re not practiced in having to rebound and come back, it makes it a little bit tougher. Today, we just didn’t have it.”

Hanover smelled it, and despite a pretty gritty effort, the Sabers allowed goals from Macy Curtis on a penalty stroke and Olivia Trummel to end it.

“Losing any senior hurts,” said Braley. “Field-wise, our goalies are really going to have to step up. (Ellie) has some big pads to fill. She’s been our starter for the last two years and now we have to find someone who can go.

“The leadership all the seniors have given has been great. Izzy (Aiello) and (Sarah) Geary as the other two captains have been invaluable. The three of them together have really been true extensions of me, which is what a great captain is. So yeah, it’s going to sting.”