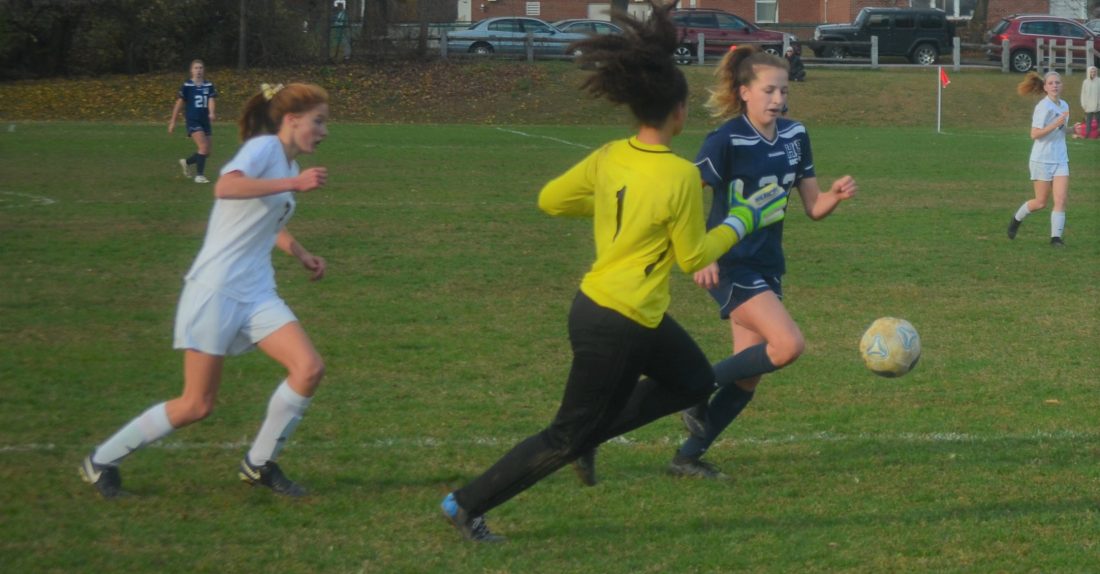 Photo by ANDREW SYLVIA Souhegan keeper Hunter Stonebreaker is pushed into action against a dangerous attack from Rachel Brackett just moments before the half.

HOLLIS – The Hollis-Brookline Cavaliers are one step closer to a state championship in girls soccer, or at the very least, one kick closer.

That kick came off the left foot of sophomore Rachel Brackett, a 71st minute strike from just inside the box that found its way to the left-hand side of Souhegan goalkeeper Hunter Stonebraker, giving the contest its only goal.

Hollis-Brookline dominated for most of the contest up to that point, with Stonebraker making a pair of saves within the game’s first five minutes, later charging out to prevent a dangerous attack from Brackett just moments before the first half’s end.

Meanwhile, Souhegan was not completely bereft of chances, but did not see many. Senior Devon McGrath took a header in from a corner in the fourth minute, in perhaps what was their best opportunity. The Sabers did also gain several free kicks in dangerous positions, but could not find much from any set pieces.

“What I really liked is the way defensive we kept shifting our shape to deal with the incredible (Souhegan forward) Greta Coulton,” he said. “Souhegan was clever, but we held our shape and I think that was the difference.”

As the game advanced, tension grew. Hollis-Brookline continued coming close to scoring over the second half, but with only one goal between the two teams in the Cavaliers’ regular season victory last week, one could assume that Souhegan could have a shot at keeping things scoreless if they could not turn the offensive tide for themselves.

“You don’t want to go against that team in PKs, not with (Stonebreaker), so as time went by, they seemed to have more bodies back,” said Clarke. “I was worried the goal wouldn’t come, because we were creating opportunities.”

The Cavaliers now travel to Bill Ball Stadium in Exeter to face Bow in the NHIAA Division II semifinals at 4 p.m. on Thursday. Hollis Brookline defeated Bow at home earlier this season, but Clarke expects that Bow will not be an easy opponent.

“We caught them off guard last time,” he said. “That won’t happen again.”