Cards end season with a playoff-like win over Dover 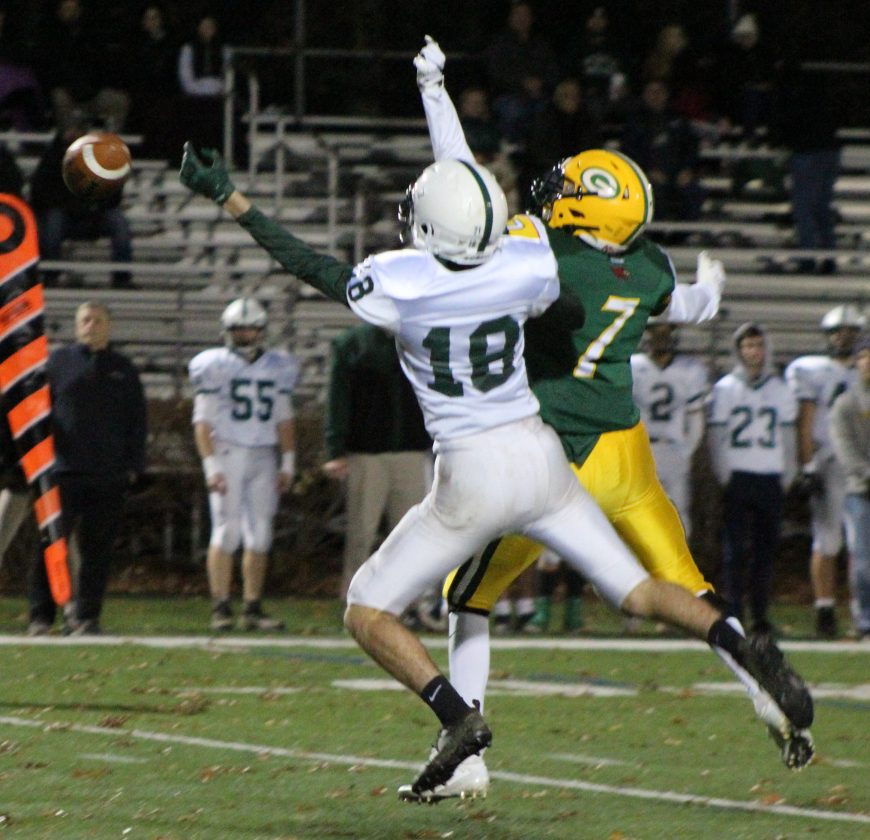 The Cards rallied from a 14-6 deficit to pull out a 22-14 win over Dover, finishing the regular season at 6-3. However, BG will likely lose out on tiebreakers to Merrimack and Nashua South for the final playoff berth in the East-West cluster.

Ethan Holt had two TDs to pace the win for BG.

With the game tied at 14 early in the fourth quarter, the Cards put together an 11 play, 70-yard drive, finished by Holt’s second TD run of the night, a 13-yarder with 5:04 to play. Cards QB Dylan Santosuosso ran in a two-point conversion to give BG a 22-14 lead.

The drive featured five straigh Holt runs for 39 yards. On the night he had 70 yards on 15 carries and his two scores.

“It was disappointing not to get in the playoffs,” Guertin coach John Trisciani said. “The team kind of felt the playoffs started for us a few weeks ago, because we had to win out to at least have a shot.

“I think they’re pretty happy they could end on a good note. Six wins is pretty big here; it was two wins last year, and one win the year before. They’re really happy. They got to end senior night, at home, with a win, so I don’t think there’s any complaints.”

Trailing 14-6, the Cardinals sent the game into the fourth quarter tied at 14 after an eight play, 60-yard march ended with a Holt 2-yard TD run and Kyle Baker two-point reception with 30 seconds left in the third.

With Green Wave up 7-6 at halftime, Dover’s Andral Lafleur blocked a Jacob Baker punt on BG’s first possession of the third quarter, and Connor Sheehan had the 14-yard scoop-and-score to help put the Wave up 14-6 with 9:44 left in the third.

The Cardinals, in the first half, had drives stall at the Dover 19, which they reached a second time later in the first quarter. However they were pushed back via sack and penalty, before Santosuosso was picked off by Dover’s Luke Geppart on the quarter’s final play.

Guertin did grab a 6-0 lead on a Joey Lupo 51-yard run with 9:29 left in the second quarter. Lupo, after missing last three gamesdue to a broken finger, was cleared to play with a cast on his hand.

However, Toby Therrien’s PAT kick was no good, keeping it at 6-0.

Dover, however, despite two first-half interceptions by Baker, was able to put together a 12-play, 60-yard scoring drive just before the end of the half, despite the first play being a Mike Terrazzano 8-yard sack and also having a score nullified by penalty.

The key was a 22-yard pass from Lopez-Sullivan to Fin Wingren, and eight plays later the Dover QB found Hunter Kaarto in crowd in the end zone with 32 seconds left in the half to tie it at 6. Max Casey’s PAT kick put the Green Wave up 7-6.

And an emotional Cardinal team met on the field afterward, knowing their season was likely over as it realized during the past week that the tiebreakers didn’t favor them.

“We were bothered,” Holt said, “but we had the gift of being able to know it was our last game, before it was played, which was great.”