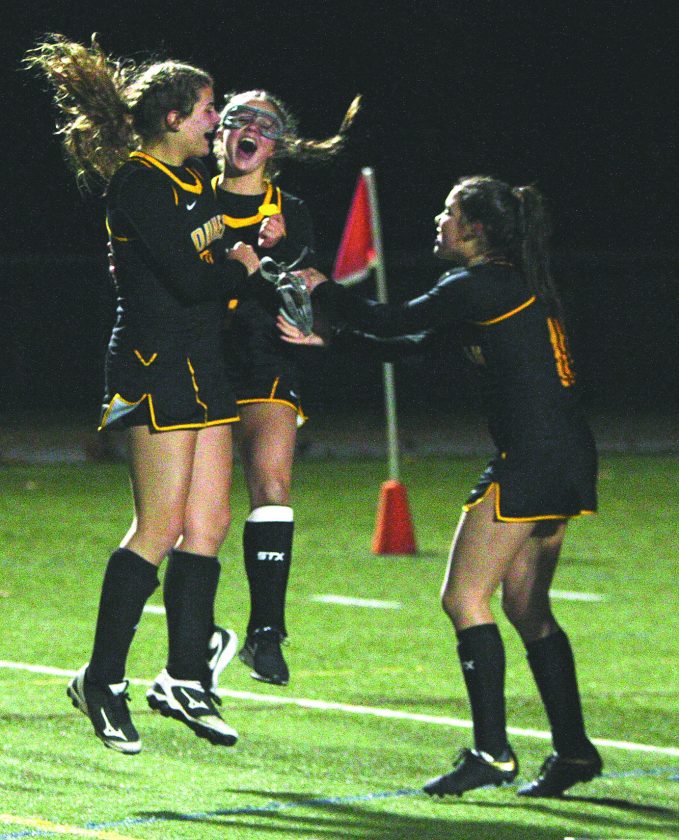 Telegraph photo by HECTOR LONGO The upset of top-seeded Derryfield in the Division II state semifinals is complete on Friday night, and the Souhegan girls celebrate.

EXETER – After 80 spirited yet scoreless minutes, these girls boldly went where no New Hampshire field hockey teams had gone before … a one-on-one penalty shootout to break the tie in the state semis.

Souhegan High School’s Ellie Byram felt more than at home in the showdown, in fact, it was like she invented the concept for some school project.

“It was really exciting, I think I did well,” understated Byram. “I try to step out and take up as much space as possible because the more space I take up the less chance they have to score. I just try to be on my toes and be active, reacting really fast. That’s how I play. This was really mind-blowing.

“It was awesome, the adrenaline was going, I was in tears.”

What an effort this was from the Sabers, who were seeded fourth coming in with a 13-2 mark that included a 3-0 loss to Derryfield about a month ago. They will now face No. 2 Hanover on Sunday (1:30 p.m.) at Bedford High School. It will be Souhegan’s fourth title game appearance and first state final since winning Class I in 2007, the schools only field hockey championship.

“That was an incredible game on both sides, hard fought, really great stuff,” said Sabers coach Kelli Braley. “I’m so proud at how deep my girls were able to dig into the tank to pull that one out. That’s a lot of field hockey that just happened. “For them to be able to go the distance is an amazing thing for me to watch, and it’s a testament to all the work they put in, all the hours we’ve spent together in training and everything we’ve set out to do. I’m beyond proud.”

Only Byram’s shootout heroics could dwarf the work she did in the first 80 minutes, spinning away threat after threat with kick saves and sprawling acrobatic dives.

She got plenty of help, too, with stellar work from Izzy Aiello, Avery Karavas, Molly Atkinson, Cari Mastergeorge and all the Sabers, who helped neutralize the lethal Cougars and their University of Michigan-bound senior sensation Lindsey Stagg.

Derryfield went first, and Byram stepped up confidently. Saber Miya Chorney then took her best shot and worked around Cougar keeper Olivia Bollengier for the 1-0 lead.

After each team missed in round 2, it was again Byram taking over Round 3, followed by Souhegan’s Juliette Rafuse, who made it look easy, with a deke and a rocket that made it 2-0.

One more save was needed to lock it down and when the Derryfield shot hit off the post, Byram booted it away, sealing the shocker.

“I was not worried about Ell at all. I knew she’d be able to handle it,” said Braley. “I really felt like we had a strong advantage there.”