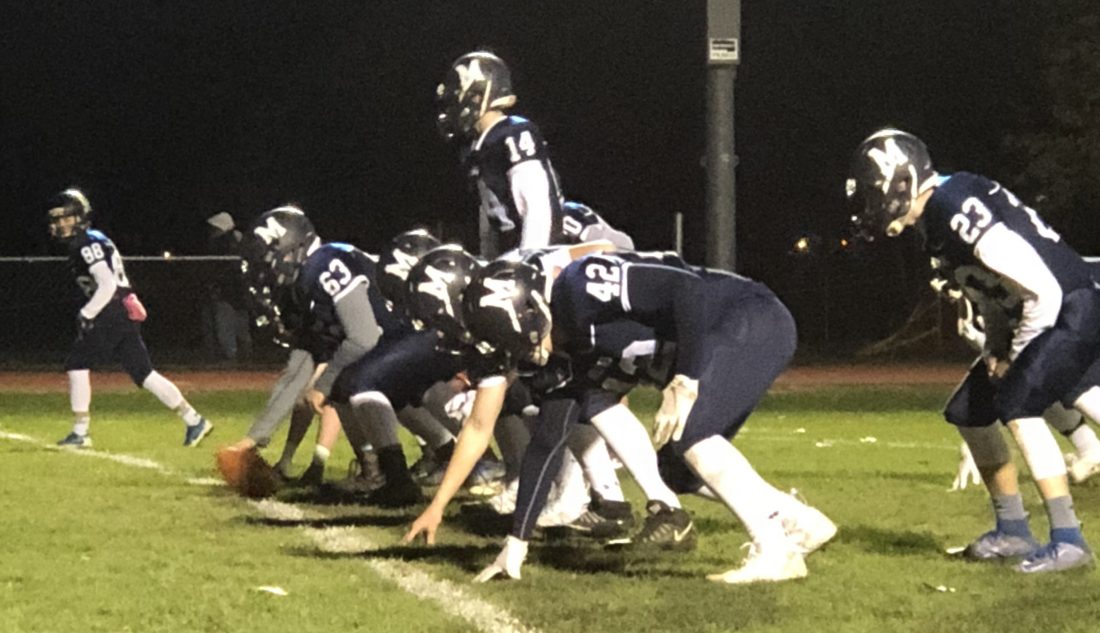 MILFORD – Considered “The Game of the Week” even by area folks with just a modest interest in New Hampshire Division II football, the Friday night battle between the host Milford Spartans and the visiting Alvirne Broncos had all kinds of attention on it. And with good reason.

The extremely congested standings in the Division II South Conference had the potential of going from tight to completely compressed with Milford, Alvirne, Pelham, and Hollis-Brookline all facing the potential of being 7-2 at the close of

And the Milford/Alvirne game lived up to every last scintilla of hype and anticipation, with the host Spartans bagging the D-II regular-season title by virtue of a spine-tingling, 27-26 overtime victory which simply had to be seen to be believed.

The Spartans stepped into play at 7-1 and with the chance of assuring themselves of the conference’s regular season title. Alvirne walked in at 6-2 and hoping to remain solidly in stride with the conference crowd while also ridding itself any frustrations left over from a lackluster effort in a loss to Hollis Brookline a week earlier.

Milford led 14-7 at halftime and appeared to have the game all but sewn up when its lead bulged to 20-7 with a little more than seven minutes left in regulation time.

But Alvirne staunchly refused to give up, and coach Tarek Rothe’s crew fought back like an animal with its back against the wall to knot the score at 20-20 and force the contest to overtime.

The Broncos then bagged their first and ultimately only lead of the night by scoring on the first possession of overtime and adding the point-after kick to take the 27-20 advantage.

However, the hosts answered with a touchdown of their own, and then a two-point conversion run by senior Sean Hanrahan gave Milford the 28-27 victory and the conference

Quarterbacks Gavin Urda of Milford and Kyle Gora of Alvirne were precisely what a gutsy signal-caller should be in spearheading their teams’ successes and drives toward victory.

Gora finished up with 119 rushing yards and a touchdown and 14 pass completions on 26 attempts for 187 yards and two scores.

Urda was good for 119 rushing yards and a touchdown along with three completed passes and a score for 45 yards.

The Spartans bagged a 7-0 lead on their second offensive series of the evening when Urda capped off a nine-play drive with a 34-yard sprint to paydirt.

Alvirne answered on its very next offensive series when Urda lofted a 24-yard scoring pass to Ayvion Prak, and the point-after kick made it a 7-7 contest with 8:35 to go in quarter two.

But the Spartans took the lead back with just 1:37 to go in the half when Junior Ughu capped off a six-play drive by driving into the end zone from 5 yards out.

The score stayed right there at 14-7 until 7:14 remained in the third period and Milford had Logan Barnhill score on an eight-yard run, but a bad snap from center killed the PAT try to leave the score at 20-7.

But Alvirne kept scratching and clawing – despite being stung by a few controversial officials’ decisions – and stood down at just 20-14 thanks to a Gora 16-yard scoring pass to Paul Manzi with 2:27 left.

The PAT by Kory Couilliard was good, and the Broncos were down by just six points.

The visitors then attempted an on-side kick which was successful with the recovery and the ball ending up on the Milford 46 with 1:41 to go and the Broncos’ offense returning to the field.

Four plays later Alvirne was celebrating an 18-yard scoring run by Gora, which made it a 20-20 game. And when the extra-point was missed, 20-20 was where the score remained.

The Broncos kept the drama right on coming when, with 53.7 seconds left, Morgan Williams intercepted an Urda pass and gave the visitors the ball at the Milford 47. But with time draining down, Alvirne had versatile sophomore Eric Allard attempt a 34-yard field goal for the win but it was blocked, and it was on to OT.

Claiming the first series of four shots at points from the 10 yard line, Alvirne bagged its first lead of the night by scoring on just two plays when Colin Prescott sprinted the ball in from 9 yards out. And the Couilliard kick made the score 27-20.

But Milford answered on its own series, with Urda using the third play to loft a 10-yard scoring pass to Barnhill.

The Spartans appeared ready to go for the game-tying extra point, but coach Keith Jones decided instead to try to end the game there with a two-point conversion.

And Sean Hanrahan did the honors by bolting into the end zone to send his team and its many fans into celebration mode.