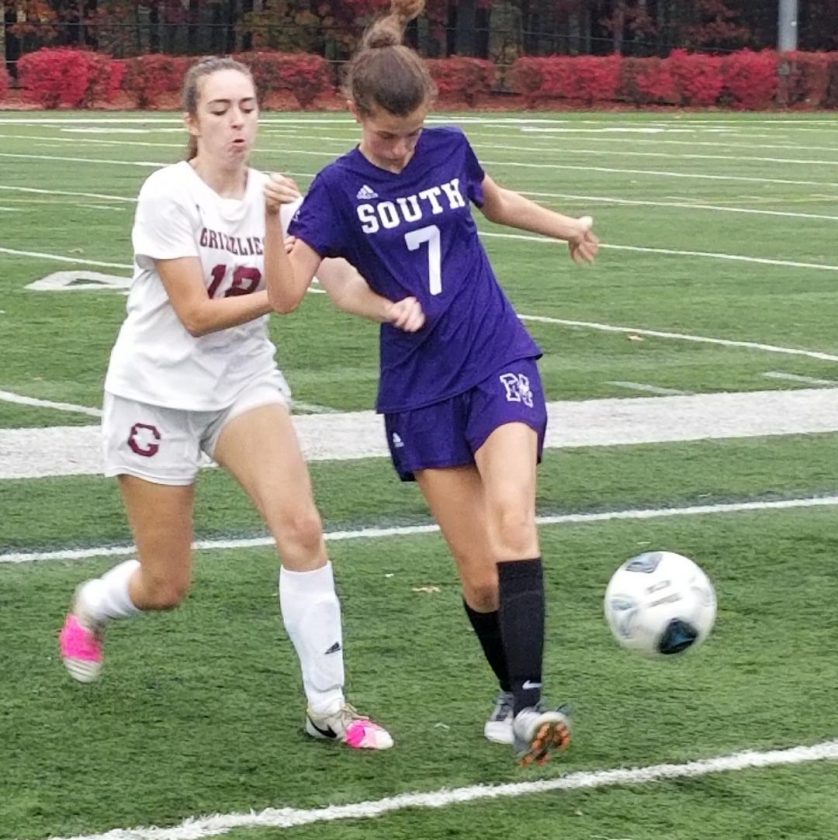 Just ask the Goffstown High School girls soccer team, as the 10th seeded Grizzlies pulled off a Division I preliminary round 2-1 upset over No. 7 Nashua South via PK’s on Thursday at Stellos Stadium.

“It’s a tough way to lose for sure,” Nashua South coach Lauren Keating said. “Nobody wants it to get to that point.”

But it did, as after both teams traded goals in the first five minutes of the game, no one got close thereafter through 95 minutes of up and down play through wind and sometime rain.

“I think the girls battled hard, they were tired but found a way,” Goffstown coach Matt Willey said, his team going 5 for 5 in penalty kicks while the Panthers had one costly miss. “But we were prepared. We’ve been in PKs three out of the last four years now. It’s nice to be on the winning end of that.”

The Grizzlies now move on to face Londonderry in the quarterfinals, but the Panthers’ season ends at 11-6.

Goffstown’s five scorers in the PK session were Blanca Candella Estelles, Kelly Walsh, Madeline Proulx, Erin Cammarota, and, with the clincher, Lillian Trnka. She beat South netminder Haleigh Swabowicz (three saves) to her left, as she went into the top of the fifth frame with the Grizzlies up 4-3 at the time.

South got penalty kick goals by Ellie Kopicko, Camile Michon and Kendra Santoro. But in the second frame, Goffstown freshman goalie Ava Vaughan leaped to her left and just got a piece with her fingers of Panther Roya Ardehali’s shot. The ball caromed off the post and out, and that sequence made all the difference. She had five saves in regulation.

“She made an excellent save, it’s a huge thing for a goalie,” Keating said.

“She watched (Ardelhi’s) hips, and was prepared,” Willey said. “She gives us a chance to win games, that’s all we can ask.”

Goffstown scored just two minutes into regulation off a flurry in front of Swabowicz, Walsh putting it far side, assisted by Alexa Skinner.

But two minutes later, at 4:31, it was South top scorer Maille McDermott’s turn, and she didn’t miss, tying things at 1. And that’s how it stayed.

“Giving up a goal in the first five minutes, you have to dig yourself out of a hole,” Keating said.

But that turned out to be McDermott’s 19th and final goal of a superb season, because the Panthers couldn’t free her up for any clean shots in the second half and overtime, despite dominating possession.

She had one shot in the second overtime, a grounder that Vaughn smothered.

“I think it’s unfortunate we weren’t able to capitalize on any of those chances,” Keating said. “A disappointing way to go out. But I’m proud of them how the season went.”