Cardinals move past Broncos to head to quarters 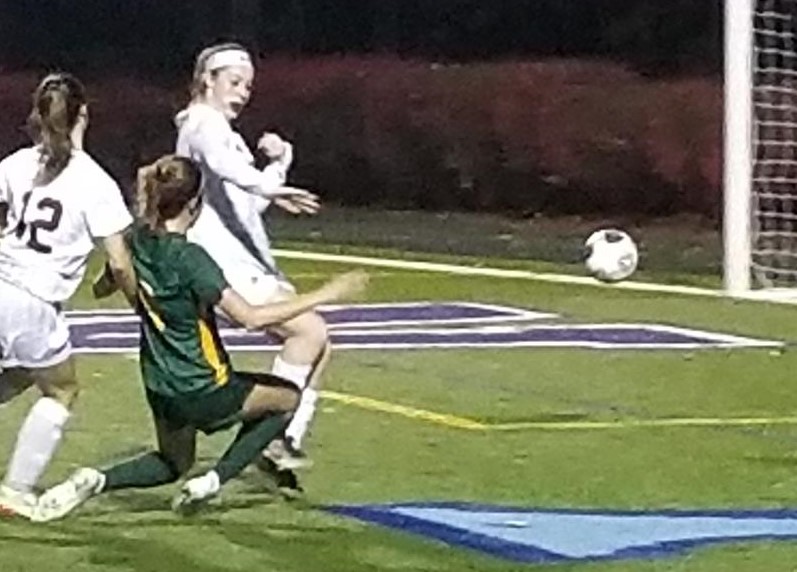 Telegraph photo by TOM KING Bishop Guertin's Brooke Paquette gets a shot off despite the pressure from Alvirne's Lyla Davis and Jaime O'Connor (12) duirng the Cards's 3-0 Division I prelim win Thursday night at Stellos Stadium.

NASHUA – The Bishop Guertin High School girls soccer team has been a tough nut for rival Alvirne to crack.

That proved to be the case again on Thursday night, as the Cardinals left Stellos Stadium 3-0 winners, same as the regular season meeting – except this was a Divison I preliminary round win.

“The seeds are fun, they’re nice,” Cards coach Pat Mulcahy said. “But it’s just one and done. So we’re taking one game at a time. We knew Alvirne was going to be very good, very well-coached.”

“I thought we played with heart all game,” Alvirne coach Jerry Ruigrok said. “I couldn’t have asked anything more from them.”

Guertin will now host No. 6 Manchester Central, which edged Merrimack yesterday 1-0 in its prelim, in Sunday’s quarterfinals. Game time is tentatively set for 2 p.m. at Stellos.

Last night Cards did what they set out to do – score early, just 1:27 in, with Brooke Paquette getting the tally.

But that was it for the first half, and things were still up in the air until freshman Katie Boudreau converted a Delaney Ramalho feed for a goal at 4:20 of the second half for a 2-0 Cards lead.

The clincher came at 67:08, with Brenna Paquette scoring, assisted by Boudreau. Alvirne netminder Brittney Whiting (eight saves) was much busier in the second half, as were stopper Sara Ruigrok and sweeper Lila Davis, who kept things closer than maybe they should have been.

“In between the 18 (yard-lines), they finish their scoring opportunities,” Ruigrok said of Guertin. “We’re letting them (get that close).”

“Obvioulsy if you can score early in any game, that changes the dynamic,” Mulcahy said. “But after we scored, we definitely weren’t as passionate as we wanted to be. There was a lot more to go.

“We’ve always been better in the second half for some reason. We had more passion, which is kind of our big word for the year.”

Grace Kelly and Grace Maloney were strong in the middle for the Cards, but they were in battles with the Broncos’ Kelly Perry and Ashley Laconte.

The Broncos had some chances in the first half, including a free kick from the 30 by Sara Ruigrok. But BG goalie Erin Morris (four saves) was equal to the task.

The Broncos (6-11) returned to the tourney after a year’s absence and look to build on it.

“We’ve learned a lot, done a lot of good things,” Ruigrok said. “Five freshmen were key players for us this year. We’ve got a lot to build on.”

Meanwhile, the Cards put one brick down last night, and want to add another on Sunday en route to a possible title.