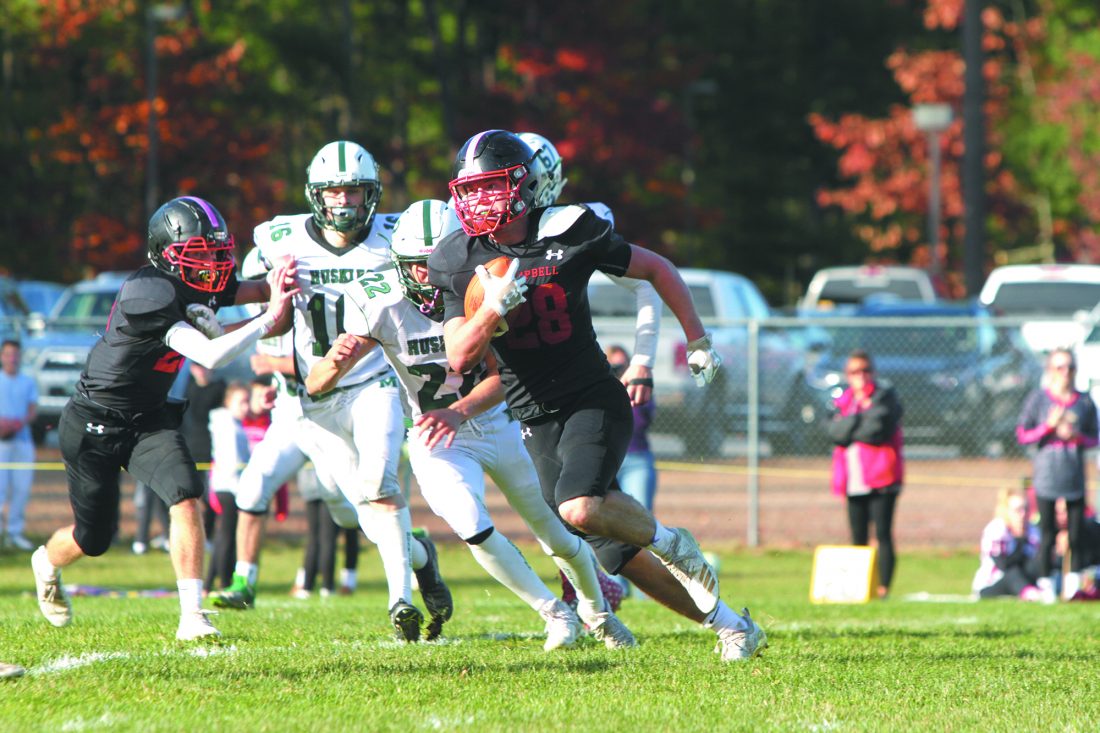 Photo by OLINDO LONGO This was an all-too common sight for Monadnock on Saturday, Campbell’s Keegan Mills busting into the open field. The senior ran for TDs of 19, 47, 58, 45 and this one of 43 yards in the Cougars’ 40-27 win over the Huskies.

LITCHFIELD – When things got rough in the second half on Saturday, Campbell High did what it does best, feed Keegan Mills.

“This proves our point,” said Campbell’s Cam Barrett, who came up with a handful of huge plays on defense in the win. “The only team that can stop us is ourselves.”

And the Cougars did a lion’s share of that on Saturday after building a 26-6 lead when Mills ran 43 yards for a score with 10:39 left in the third quarter.

That touchdown brought on a series of mistakes that the champs, who drop to 5-3, pounced on.

“They are a bunch of tough kids,” said Barrett. “I’ve always said to my friends, Monadnock is a bunch of robots. They listen to their coaches and they do exactly what they are supposed to do. For us, that’s a big struggle. They really don’t have any

The Huskies scored on a 46-yard pass from Nate Doyle to Joey Blodgett. Then following a blocked punt cut the score to 26-20 on Victor Lotito’s 21-yard touchdown run.

On the second play of the fourth quarter, the Huskies took the lead for the first and only time all day, 27-26, when Jackson Lepisto ran in from the 5 and Anthony Tomer kicked the point after through the uprights.

“We definitely have to be better,” said Barrett. “We have to get out of that and keep moving forward.”

Mills then moved to the quarterback spot, taking the snaps directly and running behind his offensive line. His 47-yard touchdown put the game back in Campbell’s favor with 3:52 left. Then he and Barrett iced it. Barrett intercepted Doyle and ran it back to the 19 where Mills ran in on the first play.

Any outside chance of a Monadnock rally was taken away by Barrett’s second pickoff of the quarter.

“I didn’t have a single target on my side of the field, so I ended up switching sides,” said Barrett. “(Monadnock’s Zion Carroll) was making all the big plays on us. On the first interception, I don’t think the quarterback saw me. So I took advantage of it. The second one, he was rushed so I went up and got it.”

Now 7-1, Campbell closes out the regular season on Friday night with what is sure to be a huge matchup. The Cougars play at 8-0 Lebanon.