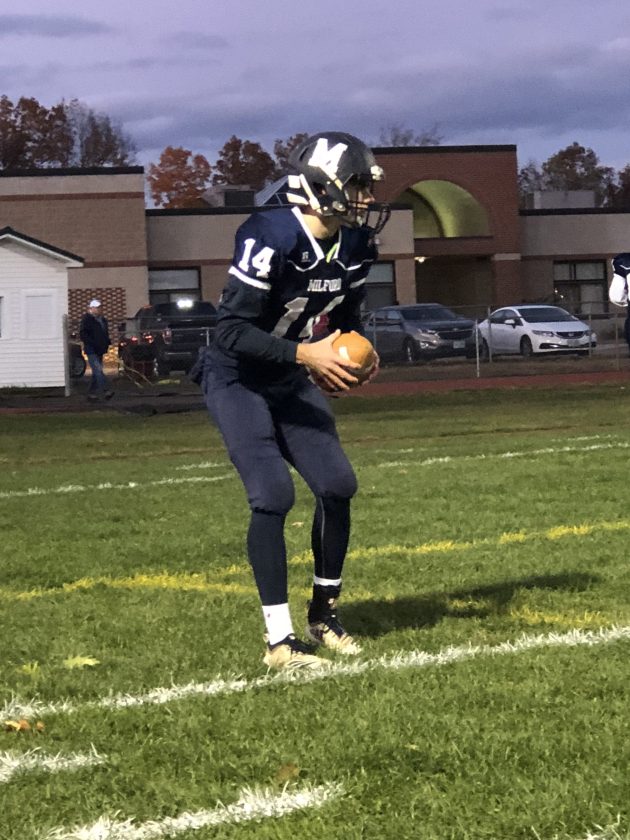 MILFORD – The consensus was that the Milford Spartans would have little trouble advancing their 2019 season record to 6-1 against the visiting – and winless – Sanborn Indians in Division II football action in Milford on Friday night. And the consensus was all kinds of right.

The hosts’ offense possessed the football six times in the first half, scored on every possession, and grasped an insurmountable 42-0 lead heading into a second half during which the clock would remain running. And when the final whistle sounded, Milford had a 49-0 victory of which it it could be proud.

The Spartans’ defense was a swarming horde during those first two periods, holding the struggling Indians (0-7) to a total of minus-one yard when the break arrived. And the visitors didn’t manage even a single first down in the opening half.

The hosts tallied some 272 offensive yards during the first half, with 207 of those coming via the ground game. And Milford scored five of its six touchdowns of the opening half on runs.

Milford’s first five offensive series’ consisted of five plays or less, with the last requiring a dozen plays to reach pay-dirt as time dwindled down on the half.

Chronologically, coach Keith Jones’ Milford contingent scored on a 7-yard sprint by Sean Hanrahan with 9:11 left in the first quarter; a 10-yard run by senior quarterback Gavin Urda with 5:17 left in the stanza; a 5-yard jaunt by Junior Ughu with 1:47 remaining in the period; a 65-yard pass connection from Urda to Jake Tewksbury just 10 seconds into the second period, a 41-yard sprint by Hanrahan with 9:43 left on the clock, and a 1-yard push into the end zone by Ryan Seale with a mere 9.4 ticks of the clock remaining before the break.

Kicker Colin Gregg was good for extra-point boots following every one of his victorious squad’s touchdowns to get the locals to their commanding 42-point halftime advantage.

The Spartans stepped into their Friday night home contest knowing that they’d be facing a winless opponent which was struggling badly, having been outscored by a jaw-dropping 91-7 combined count in recent defeats at the hands of Alvirne and Hollis Brookline. And both of those losses came on Sanborn’s own home field in Kingston.

Milford, meanwhile, was coming off of a 42-21 thumping of Kennett in North Conway on Oct. 11 and aiming to simply take care of business, keep away from injuries, and not look past the woeful Sanborn side.

No less than 10 Spartan running backs got in on the first half fun, with beefy senior standout Ughu pacing the charge by rushing for some 64 yards and his one score on eight carries.

Jones then enjoyed the opportunity to clear his bench in the second half, with the younger Urda – freshman Chuck – guiding the offense during those speedy stanzas as the Spartans simply glided to the victory.

The Spartans now drive toward their final two games of the 2019 regular season over the next two weeks with a road battle at Con-Val followed by a home contest against Alvirne.

And they’ll do so with a considerable head of steam.