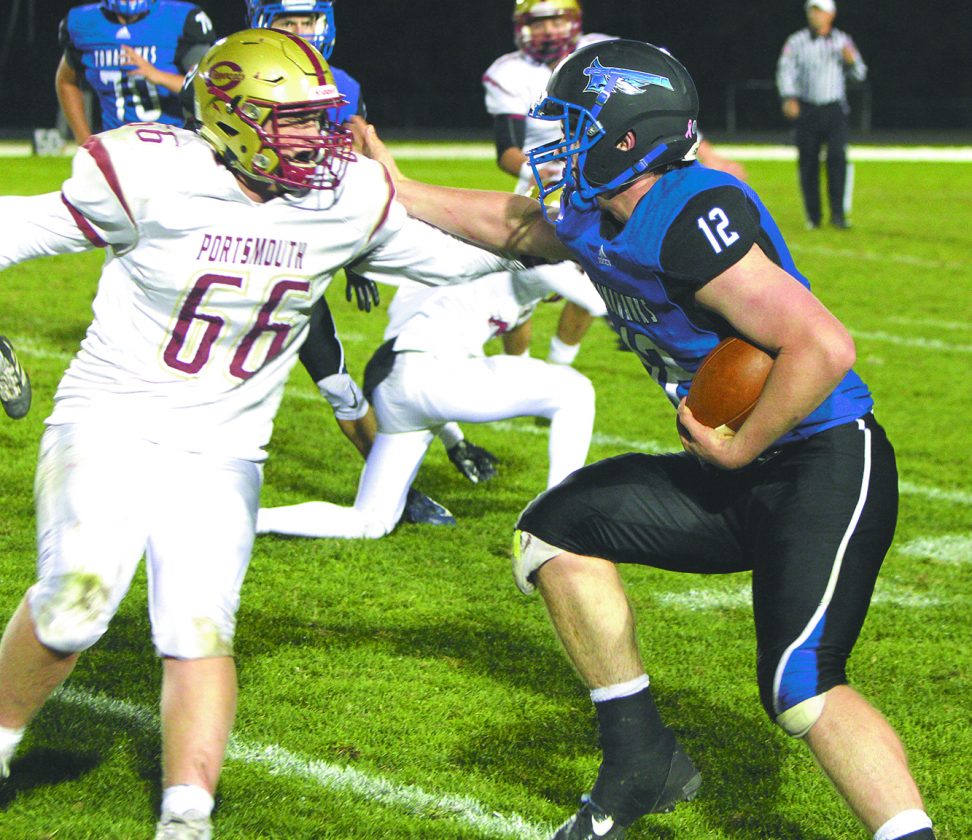 Telegraph photo by HECTOR LONGO Merrimack High's Jared Dyer turns the corner and makes this Portsmouth/Oyster River defender miss in the Tomahawks' big 56-21 win on Friday night. A menace on defense with 11 tackles, including three for losses, Dyer caught seven passes for 106 yards in the win.

MERRIMACK – Handed a cookie a week ago when Dover High shocked Portsmouth-Oyster River, the Merrimack High football team salivated with the notion of the Division I playoffs now a distinct possibility.

The Tomahawks showed just how eager they were to prove they belong, blitzing the ClipperCats with a 28-point first quarter flurry and rolling to a 56-21 decision here at Student Memorial Field.

With two left, including a trip to Stellos Stadium on Friday night and a date with unbeaten Nashua North, Merrimack needs one victory to control its own destiny. Two losses and the 5-2 Tomahawks can still qualify, but they will need help in that case.

“It was one we needed, and we came in, really felt good, and we came out with a purpose,” said Merrimack senior receiver Devin Wood. “It was one of those swing games that we need to make the playoffs.”

Merrimack QB James Dowling enjoyed a career first quarter, hitting 8 of 10 passes for 210 yards and TDs to Wood (36 yards), Jared Dyer (24) and Jake Trahan (60). For kicks, the senior tossed a pair of two-point passes to Wood.

“To start, we knew they were going to come out punching and they did, because they scored two TDs on us right after we scored,” said Dowling, whose club did actually trail 14-12 midway through the second. We just had to keep pushing, and that’s what happened in the first half. Early, I played really well, we all did. We got in tune and just kept going.”

Only a Jack Russo 33-yard TD run and a 63-yard kick return by Cam Francois kept the visitors in striking range, down 28-14 after one.

When the second began, Dyer, Wood and guys like Cody Keefe started to bring it defensively. That’s when the Tomahawks put it away.

Dowling banged in from the 2 for one score, then hit Wood for another score, this one a 15-yarder, making 42-14 at the break.

“They’re both playmakers,” said Dowling of his two top pass-catchers, Dyer and Wood. “They just make my job that much easier.”

The big-play men certainly rang up the numbers on Friday night. Dowling finished an impressive 16 of 24 for 320 yards with the four TDs and one interception that big ClipperCats’ defensive lineman Tyrese Sterling swatted then plucked out of the air. Wood, who was a menace in the secondary swatting away four Portsmouth passes, finished with seven grabs for 113 yards, while Dyer caught six balls for 113 yards.

On the ground, Zach Twardosky earned all the toughyards, 14 times for 122 yards with a six-yard TD. Sophomore CJ Hanscom closed out the scoring on second-and-goal with 34 seconds left in the game, plowing in from the 9.

There’s plenty of football left, though, a point the Tomahawks thoroughly get.

“We still have work to do,” said Wood.