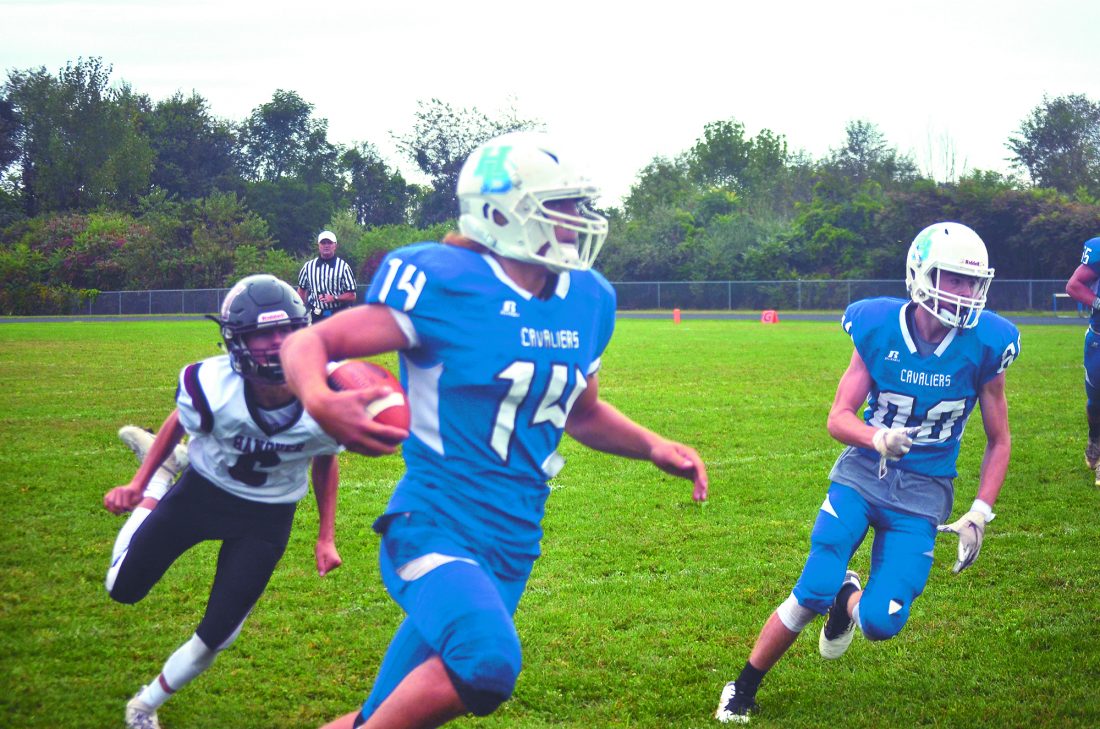 HOLLIS – One Saturday afternoon last fall, a high school football official walked off the field here at Hollis Brookline High School and muttered to a reporter on the sideline, “Where would this team be without those two?”

And as twin senior brothers Sander and Quinten Wimmer lead the Cavaliers into Saturday afternoon’s (2:30 p.m.) showdown with rival Souhegan, each is just thankful for another shot … together.

It’s been an emotional seven weeks for the Wimmers and for that matter, for all the Cavs.

Quinten, or “Q” as he is best known in these parts, delivered one of the most prolific seasons in state receiving history, catching 48 balls for 911 yards and nine touchdowns in just nine games. He too was expecting a huge final Cavalier campaign, only to see it nearly completely wiped away with one helmet to the knee in an August scrimmage.

“I was terrified. My initial instinct was to jog it off. I’ve never had a serious injury from football,” said Quinten. “When it kept throbbing while I was on the sideline, that was a serious tell. The first thing I thought of was that the season was over.”

Of course, immediately, there were tears.

“I wasn’t sad because of the pain. I was sad because maybe I couldn’t play again. I’ve never felt anything like that before.”

For Sander, there was disbelief at first.

“It was the first time without him since we started playing football, maybe like third grade,” the quarterback said.

“I mean all I could do was hope he would be OK. It’s his last year of high school football. I don’t know if he’d have recovered mentally from a season-ending injury.”

Fortunately, nobody had to find out. The injury turned out to be a serious bone bruise. Quinten missed games, the first four in fact, but he has returned and reunited with Sander, creating one of the state’s most lethal combos once again.

“He’s back to 100 percent. He still needs to wear a brace, but that’s the only thing wrong,” said Sander. “His knee is fine. His hands are great, and his football ability is right back to where it was before the injury.

“The fact he’s such a big body with great hand-eye. He also has a really high football IQ. He knows how to find open space and makes it easier for me and very hard for the defense. It makes him a huge threat.”

His absence certainly has paid dividends in other ways. First, Sander had to rely on other receivers and he’s begunto really trust them and spread the football.

Blake Bergerson had been a dynamic deep threat, catching 18 balls for 404 yards with six TDs. And senior A.J. Johnson has been Mr. Reliable with 26 grabs for 247 yards. Sander is again on an absurd pace.

“Obviously the other receivers stepped up huge, like Blake and A.J.,” said Quinten. (Sander) has been. It was a blast to watch, and now being on the field, it’s even better. It stinks (numbers wise) for me but it hasn’t been a horrible adjustment. Who knows? I had a big game against Souhegan last year (6 catches, 157 yards, 2 TDs), maybe this is the game I get to put up some numbers.”

The Sabers pulled out the thrilling 35-28 decision last year. Once again, this matchup has immense postseason implications.

“Last year? We’re still upset about that loss. We felt like we should have won,” said Sander.

The stakes are even higher now. Coach Chris Lones went off on his team after last week’s win over Manchester West. He went on the record noting that his club hadn’t really beaten anyone yet.

“I don’t want to call any teams nobody, but I think in all our wins, we expected to go into every one of those games and put up big numbers. So to some degree I agree with what he is saying,” said Sander.

“A win against them would show the other teams that HB means business.”

Quinten doesn’t need to think about the past meetings with the Sabers. They’re a major rival. Besides that, he’s just appreciative of the chance to be on the field with his brother and his teammates.

“We’re all so hyped for this game,” he said. “It’s kind of ridiculous. In practice, our team has shown a whole different level of focus this week. We want this one more than anything.”