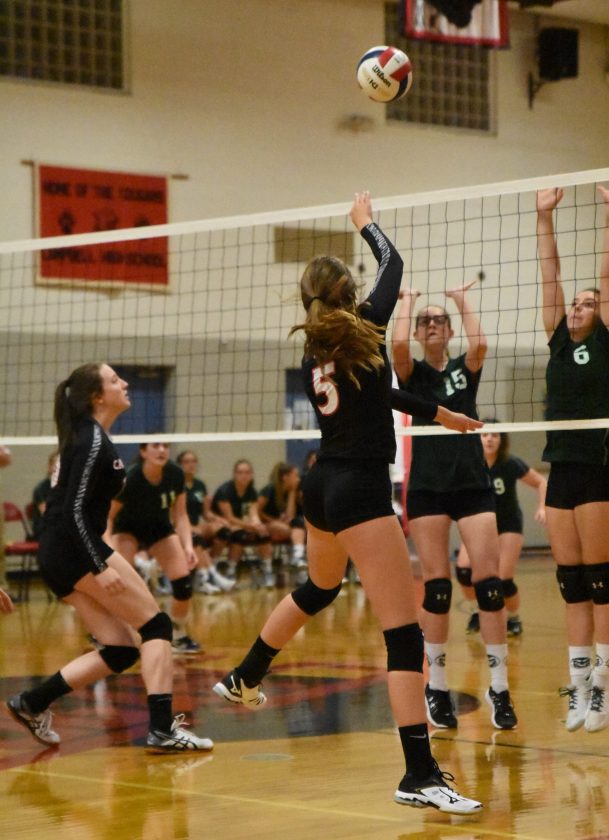 The Cavs travel to Pinkerton on Friday.

The visiting Panthers improved to 14-0 after recording their ninth sweep of the season. Anne Sherman and Kaitlin Fitzgibbons had double digits in assists while Catherine Covert had four blocks, six kills and a strong serve. Paige Garland (three blocks) also had a strong defensive performance.

On Monday, the Panthers took part in a Columbus Day Tournament at Longmeadow (Mass.) High School, with a first place silver bracket finish.

South hosts 12-3 Dover tonight in a rematch of last year’s tense quarterfinal win. It will be Meals Matter Night at the Belanger Gym.

The Panthers (2-11) held the Astros to two goals in the first half, but then things got tougher from there, despite Courtney Tello’s 22 saves.

A very tough season for the Titans came to an end as they finished 0-14.

The Warriors are now 10-3 and will be one of the playoff contenders next week.

Makenna Reekie and Monina Tosi combined for seven saves in goal for the Cardinals.

J.J. Kennedy scored on a rebound off a Liam Troddyn shot in the 67th minute for what proved to be the game winner as the Cavaliers moved to 8-5-1.

Nate McEvoy scored his first varsity goal 17 minutes in to give HB a 1-0 lead.

The visiting Spartans got a goal from Paxton Ducharme, assisted by Noah Matthews in the hard fought contest that leaves them at 7-3-3 in Division II.

Schwab and Kenny Begley had the assists while Joe Krug had to only make two saves as the Warriors outshot Epping 16-3.

Elizabeth Jacob had three goals and an assist as the Warriors moved to 10-4 in Division IV. Brooke Lane had 2 goals, while Sam Boette and Sam Yurcak each had single tallies.

Madeline Straw, Sophia Sistachs, Emily Dubois, and Boette all had assists, while Rama Koudsi had five saves in net.

WLC is at Littleton on Friday.

The Division II golf team tournament, set for today at Sky Meadow in Nashua, has been postponed due to the inclement weather the region is experiencing. The Division IV tourney at Kingswood Golf Club was postponed as well. The NHIAA made the announcement Wednesday.

“After consulting with the golf courses, the New Hampshire Golf Association (NHGA), and the latest weather report, the high winds and heavy rain forecasted for Wednesday evening and all day Thursday will make the courses unplayable/hazardous to all competitors,” the NHIAA said in a release issued Wednesday afternoon.

The announcement did not include any rescheduling, and the NHIAA announced Thursday morning both tournaments will not be rescheduled and top seed Kennett, by virtue of wins over tournament teams, gets the nod for the Division II title with Hollis Brookline the runnerup.