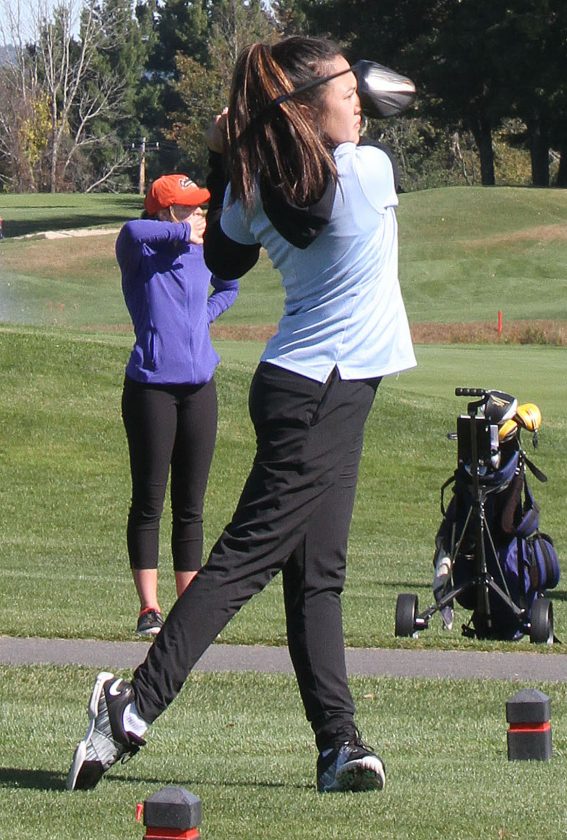 Saturday at the NHIAA State Girls Individual Golf Championships, Gonzales shot a 78, best in the region and good enough for second place overall among the 25 competitors, missing a title by one shot. It was a nice punctuation mark on a superb initial campaign for the Titans.

The solid golf was almost expected. The wisdom and grace, which Gonzales showed afterwards simply soared off the charts.

“It was a little tough to handle. I was a stroke off, and there were so many things I could have changed out there,” said Gonzales. “But I’m glad for the girl who won (Hanover’s Meredith Morhun). She is a senior. It was her last chance. I have three more years to try and do it.”

Gonzales is back to work, hitting the books and hitting balls in preparation for next week’s State Team Championships. She took a few minutes to talk about golf, high school and her future in sports.

So before we talk about the incredible golf season, the past couple months have been about transition, how has the adjustment to high school been?

What’s been the toughest thing about it?

“I would say how big the school is. I went to Pennichuck. It’s a small middle school. The size of North was a little bit of a shock at first.”

And the best thing?

“I have made a lot of good friends already. I love meeting the new people and I love being on the golf team. It’s been a great season.”

Seeing your swing out on the course, it looks like you’re a natural. How long have you been playing golf?

“I’ve been holding a club in my hands since I was 4 and playing tournament golf since I was 7.”

How did you get into it?

“My dad plays golf. He got me into it. Now, I’m better than him. Of course, I practice a lot more than he does.”

“I love golf. I’ve made a lot of friends from golf. I’ve gotten to travel because of the game. It’s taught me some life lessons too.”

How much do you play?

What about during the winter? Do you put the clubs away?

“I’ll play in the winter. We have a simulator in the garage. We have heaters. It’s warm.”

Tell me about your game.

“I hit my driver 230 or 240. Everyone says I hit it really far. Right now, I have to work on my short game, I have been struggling with that lately.”

So, tell me more about the States. You seemed to handle it so well?

“It was a learning experience. The girl I played with. I thought she was my main competitor. I was grateful to beat her.”

Nearly the entire season, including next week’s States, are played against the boys. How are you with that?

“Competing against the boys is fun. They’re all super nice. They are super competitive, so they make it fun for me. They’ve all been very good to me. I just want to be better than I did at the girls individual and beat some of the boys at States.”

You play with one of the top boys in the state on a daily basis, right?

“Bryce Zimmerman. He’s our no. 1. He’s very ambitious how he plays, always trying to play his best. Some days at practice, he says he’s going to shoot way under, and he just does it. It’s crazy.”

OK, Eva. That’s awesome. Let’s finish up with one final question. Will there be life after golf, in a high school sense?