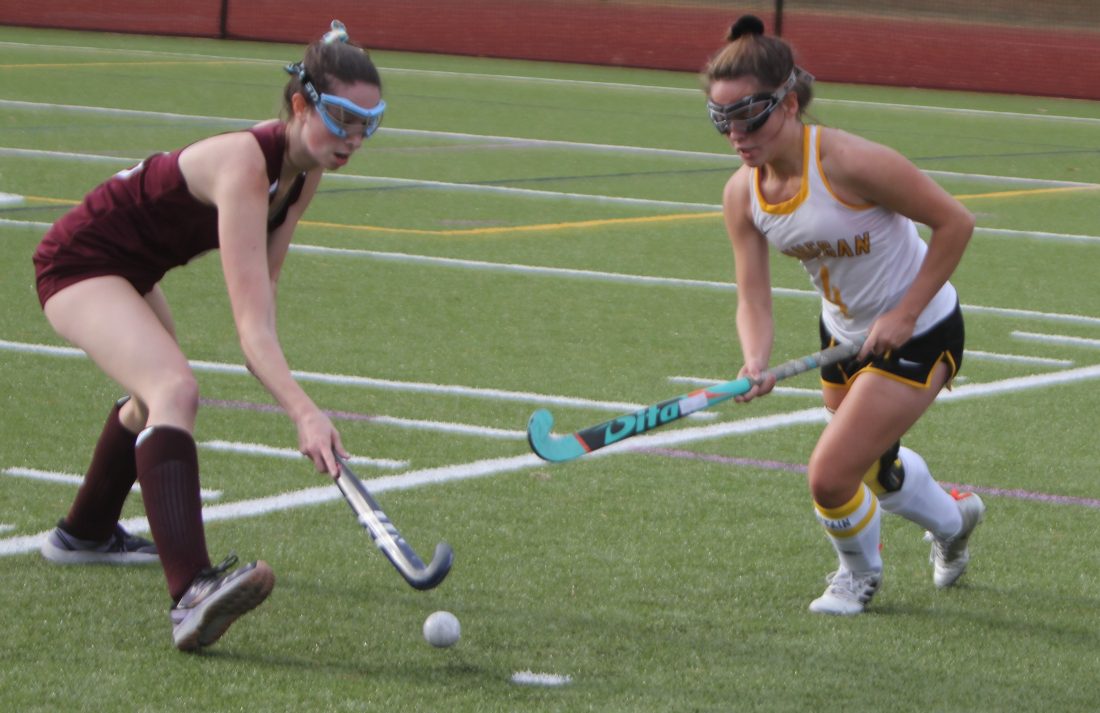 The Souhegan High School girls field hockey coach knew that at some point, the team’s streak of 10 straight games without allowing a goal would come to a halt. She was just hoping its unbeaten streak wouldn’t do the same, but the Derryfield Cougars ruined that too in a 3-0 win of Division II powers at Saber Field.

“In a lot of regards, it’s nice to get the monkey off your back a little bit,” Braley said after watching Derryfield senior Lindsey Stagg score twice and have an assist. “That’s a ton of pressure. I’m sure the girls feel the pressure, I know my goalie (Ellie Byram) feels the pressure for sure. Going 10 games unbeaten and unscored upon is terrifying in a lot of respects.

“Guess what? Now we’ve given up a couple and we have to move on. I’d rather it happen now than in the playoffs.”

“We talked about them not being scored on,” Derryfield coach Lenny McCaigue said, his team now 11-0-1, “and how they might react to that mentally when the first goal went in. I think it gave us some confidence.”

All of the Cougars goals came off penalty corners – three of their five — and that first one came at the 17:47 mark of the first half. Stagg blasted a shot that Anna Templeton redirected in mid-air with her stick past Byram.

The second one came nearly five minutes later, Stagg’s first goal, off another penalty corner for a 2-0 Cougars halftime lead.

“The last two or three years we’ve worked really hard for her to become a penalty corner specialist,” McCaigue said, “and she has that skill to create space for herself to create a shot.”

But the problem was for the Sabers, they didn’t get a lot of chances for themselves. Defenders like Izzy Aiello and Caroline Mastergeorge were kept busy, and the Saber offense was never able to get really untracked. Cougars goalie Olivia Bollengier only had to make one stop.

“We weathered the storm at the beginning, the first 10 or 15 minutes we bent but we didn’t break,” McCaigue said. “And then we sort of worked our way into it. After the first 10-15 minutes, we started to compete.”

And now the Sabers try to regroup and look more toward the postseason. Nemisis Windham left Division II a year ago, but Pelham ended their season in the tourney. And now Derryfield could be that hurdle.

“They’re a great team,” McCaigue said of Souhegan. “They’re not unbeaten for a reason. These are the games we want before going into the tournament.”

And it’s a game Souhegan would love to have again in another couple of weeks.