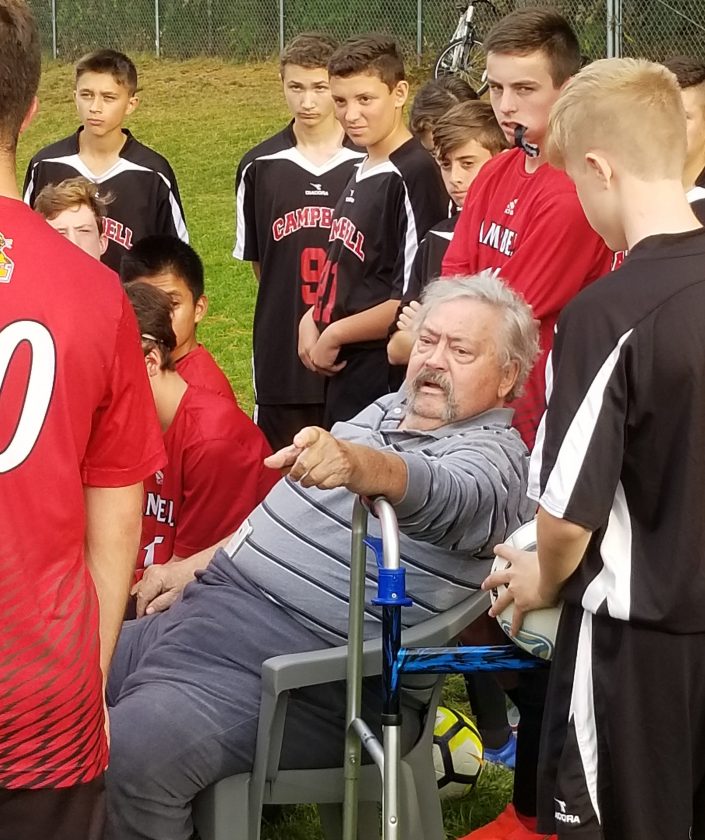 Telegraph photo by TOM KING Campbell boys soccer coach Bill Miller has used a variety of methods to teach and motivate the Cougars to a state title last year and 9-0-1 start this season in Division III.

Bill Miller always involves his players, as they know his every move.

Last week during an interview, the Campbell High School boys soccer coach turned to one of his players and said, “Do we practice PK’s (penalty kicks)?”

The response: “Every day.”

Campbell won a championship that way a year ago, and the Cougars certainly look like they have a shot again this year.

“It’s just (being) consistent),” Miller said. “Like my captain said,we practice the Pks, because that took us through two games and the championship. It’s absolutely huge.”

Miller has the pedigree, as a successful college coach (Daniel Webster and Fitchburg State, to name two) and has also been successful years back at the high school level. He and his two sons, Aaron and Zach – they run a longtime soccer school out of Brewster Academy — have been a godsend to the Cougar program. Campbell was stuck very late in the game in August of 2018 looking for a coach, and the Millers arrived as a package deal, with Aaron carrying the official title of head coach. But, after also being an assistant at Plymouth State last year with the women’s program, he left for a college job out west and Bill Miller has basically been running the show with help from Zach and fellow assistant Jay Holder. He’s part old school and new school.

But all the Millers have done since a year ago is turn potential chaos into one championship, and who knows,maybe another, as the Cougars are 9-0-1 thus far heading into Tuesday’s game with Winnisquam. They’ve already knocked off two previous unbeatens, Belmont and Gilford.

“I don’t want to get focused on me, but quite frankly, they’ve got to get used to my style, and my voice, because it’s very different,” Miller said. “And frankly, I’ve coached Fitchburg State, undefeated, Plymouth State. All these colleges I’ve done. So I had to adjust to the idiosyncracies of young men. And (in high school), a freshman, to a junior, to a senior is dramatically different.”

He’s done pretty well so far. This is a very young Cougar team with just five seniors, and Miller makes sure all his players, from seniors to freshman, pay close attention. They don’t wander far from him on the sidelines, that’s for sure, as he likes a physical brand of soccer.

“That’s what these 20 freshman need to learn,” Miller said. “You’ve got to play tough because they’re tough. … “My parents were boxers in Philadelphia. You get hit once, you better right come back, or you’re going to be gone.”

“They are definitely the most physical team in this division,” said longtime Gilford coach Dave Pinkham, who certainly knows a few things about successful soccer as the winningest soccer coach in the state. “A lot of teams out there would like to be physical, but they’re just not physical. …

“I look at them and I say ‘Learn from them,’. They’re just a well-rounded team, and they take advantage of opportunities.”

Miller likes the pyschological aspects of coaching, dipping into the mental, scientific approaches.

“You can shape them a little bit,” he says of his younger players. “And there’s a little bit of the psychological aspect. They haven’t had that before. They find it bizarre,but I’ve worked 40 years doing that. …

“We do some strange things, like kickoff (talking about a kickoff play he’s been trying for a goal). We scored in the first five seconds last year against Raymond. We kicked it in, and that goal held up for 70 minutes.”

It’s a different year, and a much younger Cougar squad. But it has players like seniors Dave Latsha,Joaquin Heller, and Tyler St. Onge to help preach the Miller Gospel.

“The season’s wide open right now,” St. Onge said. “We’re building our squad back up. It’s a wide open season right now, and we’re working hard to get back there.”

Miller is coaching for now and the future.

“I went and watched Mascenic in New Ipswich,” he said. “They’re surprisingly strong. They’re big and beefy and they can play. … We put everybody in the game as much as we can. We’ve got to prepare for people like that.

“You become what you think. Isn’t it the truth?”

The defending champion Cougars think they’re pretty good. And the last two years, they certainly are.

A special event is taking place this Thursday at Saint Anselm College, and it’s all due to the collective brainstorming of the players and coaches in the Bishop Guertin High School girls basketball program.

Every year the Cardinals try to do some type of community service project, and a few months ago Cards coach Brad Kreick met with his players to discuss this year’s project and the result is a panel discussion “Woman to Woman: Shooting For Greatness” at the college’s Dana Center this Thursday night at 6:30.

The event will be moderated by former New Hampshire U.S.senator Kelly Ayotte, with current NH Senator Jean Shaheen as a special guest.

The discussion will be centered around “issues central to empowering and advancing gender equity for women in American society” according to a press release.

And that was just a small sample.

Admission is free but attendees are asked to donate toward the organization Bridges in Nashua, which provides shelter and support services for women who are victims of domestic violence.

The event also serves as a fundraiser for the Cards girls hoop program, which will be heading to Naples, Fla.to play in a prestigious 16-team Christmas tournament, the Naples Holiday Shootout, Dec. 28-31. It reportedly includes five of the nation’s top 60 nationally ranked teams.

Second, the 9-1 Bedford Bulldogs girls soccer team on Wednesday will visit Nashua to take on Bishop Guertin, which was 9-0 going into Monday night’s game at winless Spaulding in Rochester.

The key Divison I contest was origninally slated to be in the afternoon at Guertin’s Elliott Field, but it will now be at Rivier University’s new Linda Robinson Pavilion Wednesday at 6:30 p.m.