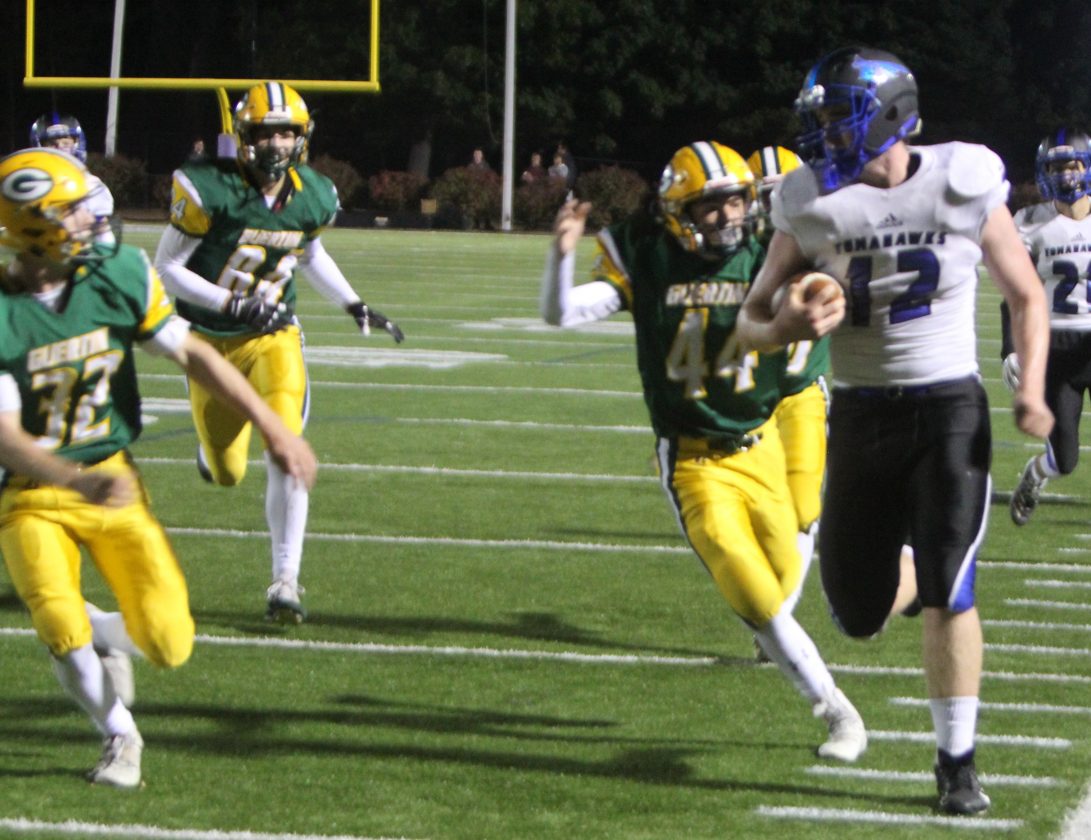 Telegraph photo by TOM KING Merrimack's Jared Dyer races down the sideline while Guertin defenders Ethan Holt (44), Kyle Baker (84) and Joey Lupo (32) try to close in during Saturday night's game at Stellos Stadium. The Cards and Tomahawks were tied at 7 at the half. A full account of the game is at nashuatelegraph.com and will also be in Monday's Telegraph.

NASHUA – It’s a new day, a new week, and a new month for the Merrimack High School football team, which likely felt as if it saved its season on Saturday night.

The Tomahawks, tied at 7 with Bishop Guertin at halftime on a chilly night at Stellos Stadium, powered their way through the second half en route to a 35-19 win.

The victory snapped a two-game losing streak, moving the Tomahawks to 3-2, same as their fellow West Conference Cardinals, who saw their own three-game winning streak come to a close. There’s a jumble now after 5-0 Nashua North in the West, but the ‘Hawks couldn’t

“We were upset with how we played (last Friday),” said Tomahawk senior Devin Wood, who had three TDs, two on receptions, and an

“We weren’t ourselves. We mainly focused on ourselves, playing as one, playing as a team, playing with a purpose and emotion. It was a very emotional night for all of us because our seasons were on the line and we all came

“They were physical, they were playing with more of a purpose, I think,” Merrimack coach Kip Jackson said of his players. “Football’s a much easier sport if you play like the hammer instead of the nail, and we’d been the nail for a few weeks in a row now.”

“They’re good,” Guertin coach John Trisciani said. “They’re very well coached. I think it kind of showd us a little reality check where we are.”

Trailing 7-0 late in the first half, the Tomahawks tied things up when Kyle Crampton – who shared the QB spot with James Dowling – hit Devin Wood on a quick 7-yard fourth down slant with just over a minute to play.

They then set the tone by coming out in the second half and marching 63-yards in seven plays, Crampton hitting Jared Dyer for a 17-yard TD to help give the the lead for good at 14-7

Guertin bounced back with Dylan Santosuosso’s second of three TD passes, and his first of two to Kyle Baker, this a 22-yarder to pull BG to within 14-13 with 3:50 to play in the third. But the potential game-tying PAT kick was blocked and it was all Merrimack after that. Dowling found Wood on a 42-yard catch-and run for a 21-13 lead.

The ‘Hawks added two more scores, a 9-yard Dyer TD run nearly two minutes into the fourth, and a Devin Wood 1-yard plunge with 5:48 to play to help make it 35-13. The Santosuosso-to-Baker connection finished the game with an 11-yard TD as time ran out.

As expected on Saturday night, facing what basically amounted to an elimination game for Pelham High, the Pythons played Hollis Brookline extremely tough, rallying for a 20-15 win over the Cavaliers.

Would that be considered an upset? Probably not, especially after watching Pelham dismantle HB a year ago.

What it does is now leave a logjam in the Division II South standings. With three 4-1s (Alvirne, Souhegan, Milford) and three 3-2s (Pelham, Hollis Brookline and West).

The only two Division II unbeateans reside in the North with Bow and Kennett, while defending state champ Plymouth is 3-2.

Remember, the two champs and the next six best teams, through the points system, qualify.

For HB on Saturday night, the passing game just couldn’t get going. Sander Wimmer was 11 for 20 with an interception for 54 yards. Wimmer did run 21 times for 89 yards with a touchdown and a two-point conversion.

Marc-Andre Thermitus also had a five-yard TD run for the Cavs, who led 15-13 in the third quarter but could not hold on.

In a rare overtime finish, Campbell fell to Trinity on Saturday night, 31-24.

A fumbled Trinity opening kickoff return was recovered by Carter Vedrani, giving the Cougars the ball just five yards away from the end zone. Keegan Mills needed just one run to bring home Campbell’s first touchdown, but he only touched the ball three more times before the half.

Trinity eventually responded, with a pair of John Thibault touchdowns and a Liam McCoy field goal from the Campbell eight-yard line, giving the Pioneers an 18-8 lead at the half.

Mills saw more action in the second half, beginning the first drive of the second half with a 28-yard run that concluded with a one-yard Cam Barrett run into the end zone. Mills also provided a two-point conversion to bring the game back within a score.

Vedrani connected with Barrett from 35 yards out to give Campbell back the lead, but Thibault added another score with 6:33 left in the contest to leave the game even at 24-24.

McCoy was unable to connect on the extra point, and neither team managed to break the deadlock, despite a Campbell trip to the red zone that ended in a fake field goal attempt as time expired.

Now as each team received four sets of downs to decide a winner, Trinity managed to find the end zone on their last attempt as John’s younger brother James broke a tackle at the five to score, with the Pioneers denying the Cougars’ four attempts to score.

John Thibault ended with 177 yards rushing and 24 yards on a pair of catches as well. Mills led the way with 88 yards rushing for Campbell.