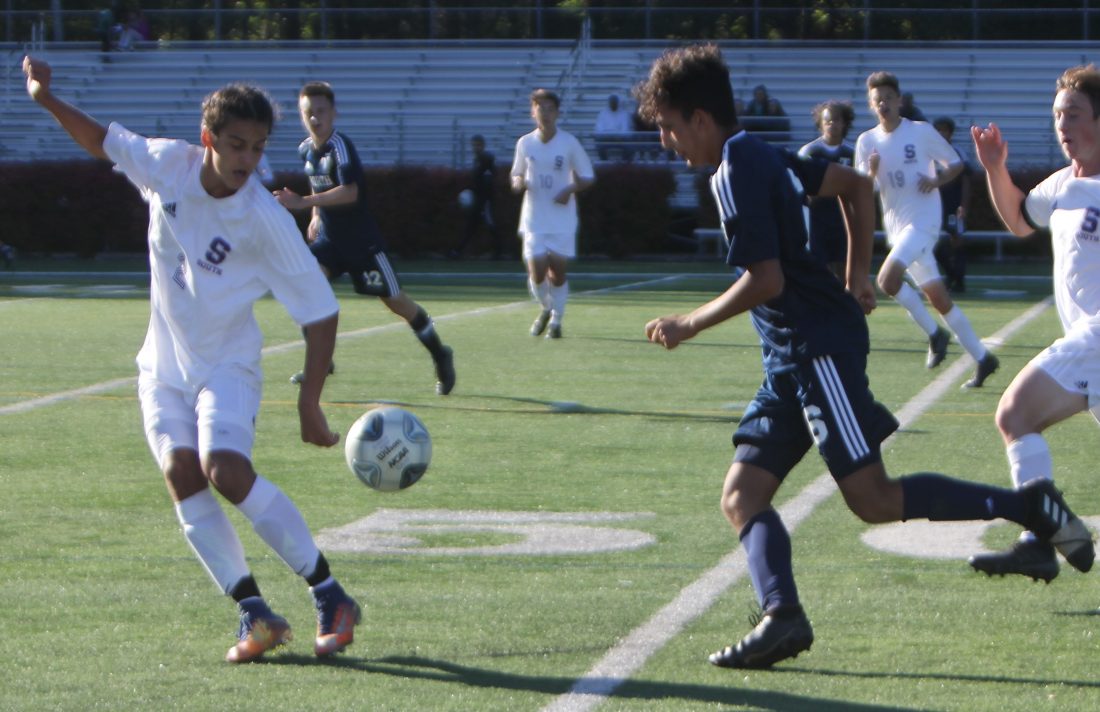 Telegraph photo by TOM KING Nashua South's Daniel Miranda, left, tries to redirect the ball away from an oncoming Nashua North forward Matthew Urrea during Saturday's Battle of the Bridge at Stellos Stadium.

NASHUA – The Battle of the Bridge is still ongoing, thanks in a big way to Nashua High School South sophomore striker Ethan Emata.

That puts things at 8-8-1, and things will be decided with whoever finishes higher at the Division I Fall Spirit (cheerleading) competition at Pinkerton Academy on Sunday, Nov. 10.

He hit a roller that beat North netminder Simon Costa to his left in the 31st minute of the first half to snap a 1-1 tie. Then, in the second half, he nailed two nearly identical rockets that Costa had no chance on, in the 69th and 71st minutes,

“I thought to pull it out to my left foot, because that’s my striker foot,” Emata said. “This was amazing. This was good for me, too, I really wanted to score here.”

“He was the difference,” North coach Josh Downing, his team now 5-4-1, said of Emata. “I actually felt like we had more chances in the first half. They were up 2-1, but I was happy with how we played. In the second half, they (the Panthers) had more chances.”

“He can strike the ball,” South coach Tom Bellen said of his sophomore. “Before he kicked that second goal, I knew he had it lined up perfectly. He can rip the ball, man. They were lasers. (Costa) had no chance at it.”

“Momentum changes, and we start sitting back,” Bellen said. “We’re better when we attack.”

And when Emata and that left foot of his is on the attack.

Both teams had chances early, but late in the first half, at 37:37, South’s Mallie McDermott broke free from North defender Ariana Dumaine and booted a hard roller that freshman keeper Grace Cardin, who was superb with 12 saves, couldn’t reach.

“She has no fear, and knows how to read the game better (than most), always ahead,” North coach Jacqueline Thompson said, her injury-riddled team now 3-6-1.

“Ellie played a great ball in,” McDermott said as the Panthers improved to 6-3. “I didn’t know if it was going to go in or not, I just needed to get a foot on it, anything.”

It was the only goal the Panthers would need, but at 63:22, South’s Ellie Kopicko nailed a penalty kick to just about clinch things. The Titans had chances, especially Dumaine and Emilee Deleo, but South keeper Haleigh Swabowicz, with help from her defense – especially on one Dumaine chance – helped keep the Titans off the board. But three of her four stops were in the first half as the older, more physical Panthers kept control.

“We talked about that a lot the last couple of weeks, how we can’t let balls bounce and have to challenge the other team,” South coach Lauren Keating said. “We’ve been talking about keeping the intensity up. They (North) played really well as a team and had a lot a younger players out there. I’m happy to come away with a win.”

“South is much more physical than we are,” Thompson said. “But to be honest, I’d take these girls any day. This is the first day I’ve had all my players in three weeks. For them to dig deep and play with their heart out, I’m proud of them.”