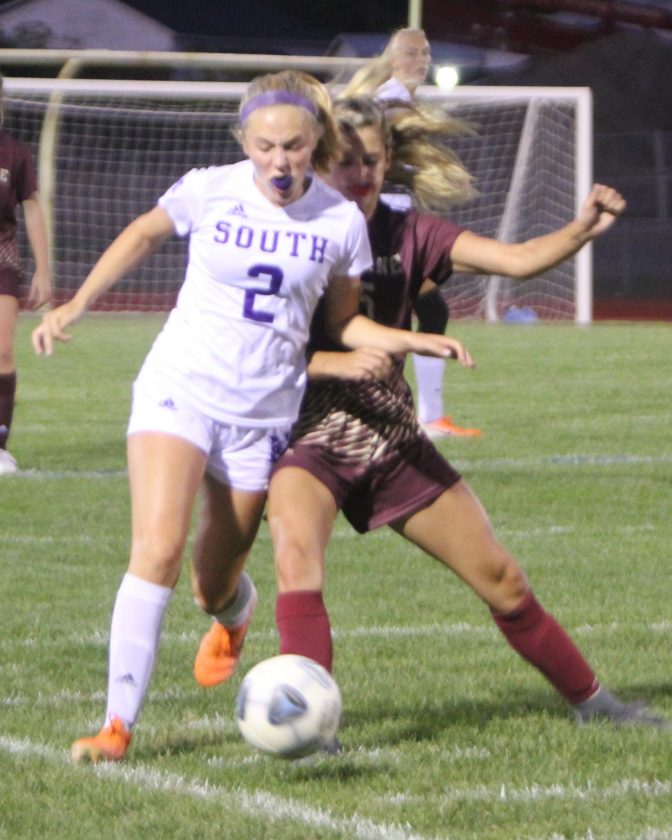 HUDSON – The Nashua High School South girls soccer team must love it when a plan comes together.

There were five minutes left in a 2-2 fight to the finish Tuesday at Alvirne High School, when South coach Lauren Keating had one simple strategy she yelled to her team:

About 30 seconds later, South wing Camille Michon carried out the plan, streaking down right wing and firing the ball in front of Broncos goalie Brittney Whiting (seven saves), leading to the second of two Kourtney Lopez goals in a 3-2 Panthers win.

“I just wanted to be in the best spot I could be to help my teammates win,” Lopez said. “The ball actually hit the pole and I hit it again to make sure it went in.”

The goal stopped a two-game losing streak for South (3-2), while it extended Alvirne’s (2-3) to three games.

“She’s been working so hard at making those runs, really attacking the goal and getting up and down the field,” Keating said. “It’s her hard work that paid off.”

It was a game in which hard work was going to win it. The teams traded penalty kicks, corner kicks, fortunate bounces, bad bounces, big saves and intense runs up and down the field. It couldn’t have been tighter.

“It was an evenly matched game,” Alvirne coach Jerry Ruigrok said. “We need to possess the ball a little bit more, and take the pressure off ourselves a little bit.”

Alvirne had only one lead in the game when Hannah Sellingham willed her way through two Panther defenders, converting a Kelly Perry feed at 21:11of the first half, a ball South goalie Haleigh Swabowicz (eight stops) had no chance to reach.

South’s Maille McDermott scored on a penalty kick 13 minutes into the second half to tie things, and then Lopez scored the go-ahead goal off a corner kick just over three minutes later for a 2-1 South lead.

But one good penalty kick deserves another, and another foul in the box gave Perry a PK which she converted about minutes later to tie the game. It should have sparked the Broncos, but instead ignited South.

“We came back and took the next 15 minutes and responded to it,” Keating said.

“Soccer’s a funny game,” Ruigrok said. “We’re playing with a lot of energy this season, a lot of intensity. We’ve had a tough schedule the beginning of the season but we’re hoping we can build some momentum and get in the playoffs this year.”

It’s also a different South team than the last couple of years, with scoring sensation Angie Suaza having graduated. But now the wealth is spread and the Panthers seem more engaged.

“Sometimes when you have a player like that, you depend on them,” Keating said. “This year we’re depending on ourselves as a team, instead of one player.”

And Tuesday it was Lopez’s turn to be dependable.