Spartans continue their quest with 3-0 win over Cavs 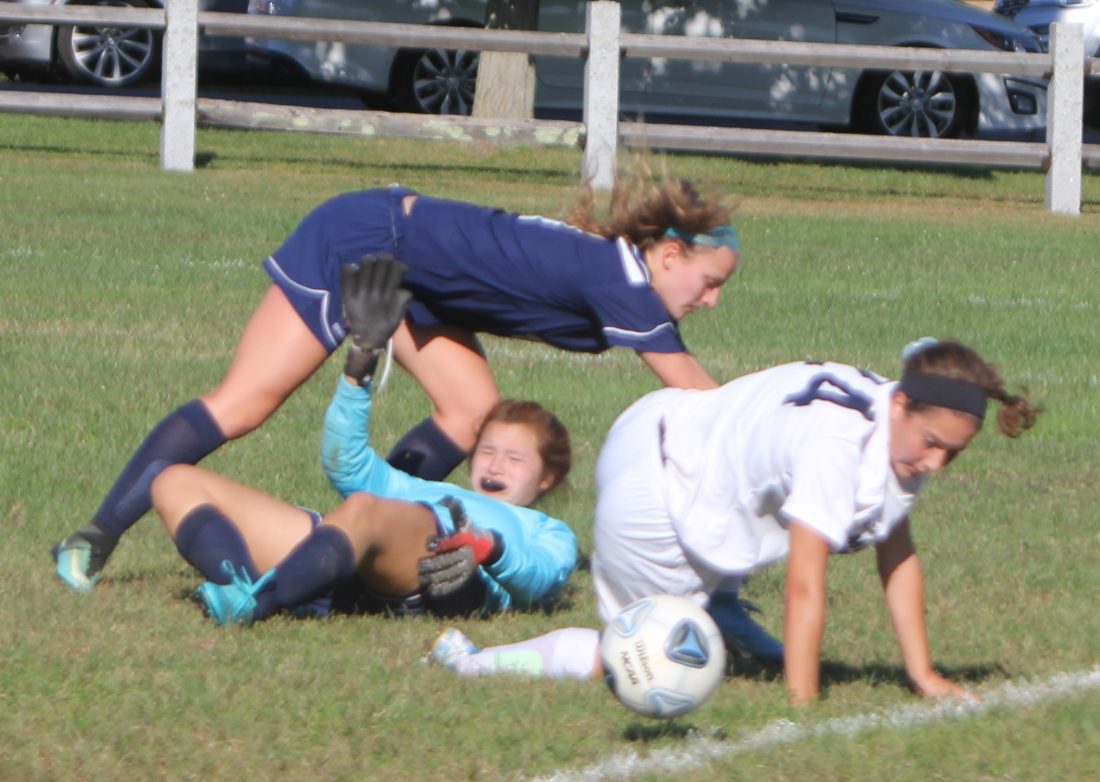 Telegraph photo by TOM KING Hollis Brookline's Nicole Heiter, left, Cavs goalie Maggie Crooks and Milford's Syd Thibault all go down in a heap during a rush by Thibault in Milford's 3-0 win Monday in Hollis.

After coming so close to winning a Division II state title a year ago (loss in penalty kicks to Hanover), those Spartans returning are hungry to get back to the title game. That showed when the Spartans (5-0) handed Hollis Brookline its first loss, 3-0 on Monday.

The Cavaliers (3-1) thought they would be after a hard fought win over Souhegan on Friday, but it proved costly as top senior forward Tasha White injured her knee and could not play yesterday. She’ll be evaluated this week, but clearly she was missed on Monday.

“We kind of knew coming in we were in a tough spot because of the big emotional, grind-out win on Friday,” HB coach Peter Clarke said. “We missed (White) a lot because A, she usually gets in and creates havoc for us, and B, it figures you pay attention to her with two or three players and it opens up opportunities for the others.

“But I’ll tell you what, Milford’s good. They didn’t show me anything I didn’t expect.”

“We lost a lot of players last year, but we have a lot of experience here,” Milford coach Russell Matthews said. “But we keep reeling it in, we keep getting better, keep working hard.”

Both teams worked hard on Monday, but the game hardly resembled the regular season and quarterfinal classics these two played a year ago as the Spartans were in control for a lot of the game. Emmy Sullivan buried a shot from about 25 yards out some 26 minutes in. The Spartans later got a break on an own goal just inside of five minutes remaining in the half, Milford’s Mikayla Thompson getting credit for the score.

Thompson later assisted on a Thibault 30-yard rocket that HB goalie Maggie Crooks (seven stops) had no chance on in the 60th minute.

“We want to take control of the pace of the game,” Matthews said. “We like to play frantic, make people make mistakes. We like to transition off that quickly and move the ball.”

HB still put up a fight without White. Milford goalie Jade Gregg had six saves, but also got a couple breaks when HB’s Emma Ruvido fired over the net from point blank range, and Sienna Moskun hit the crossbar, both in the game’s final 10 minutes.

The Milford coaches, including Matthews, wear T-shirts that on the back say “One moment, one game, ONE TEAM, This is our time.”

“You get a taste of something like that, and you want to be back there, right?” Matthews said of the last year’s title game. “The girls all feel that game slipped away from us, we should’ve had that. We felt like we could’ve played well enough to have won that, so we want to get back there and take care of it this year.”

There’s a long way to go, but so far, yes, it’s been their time.