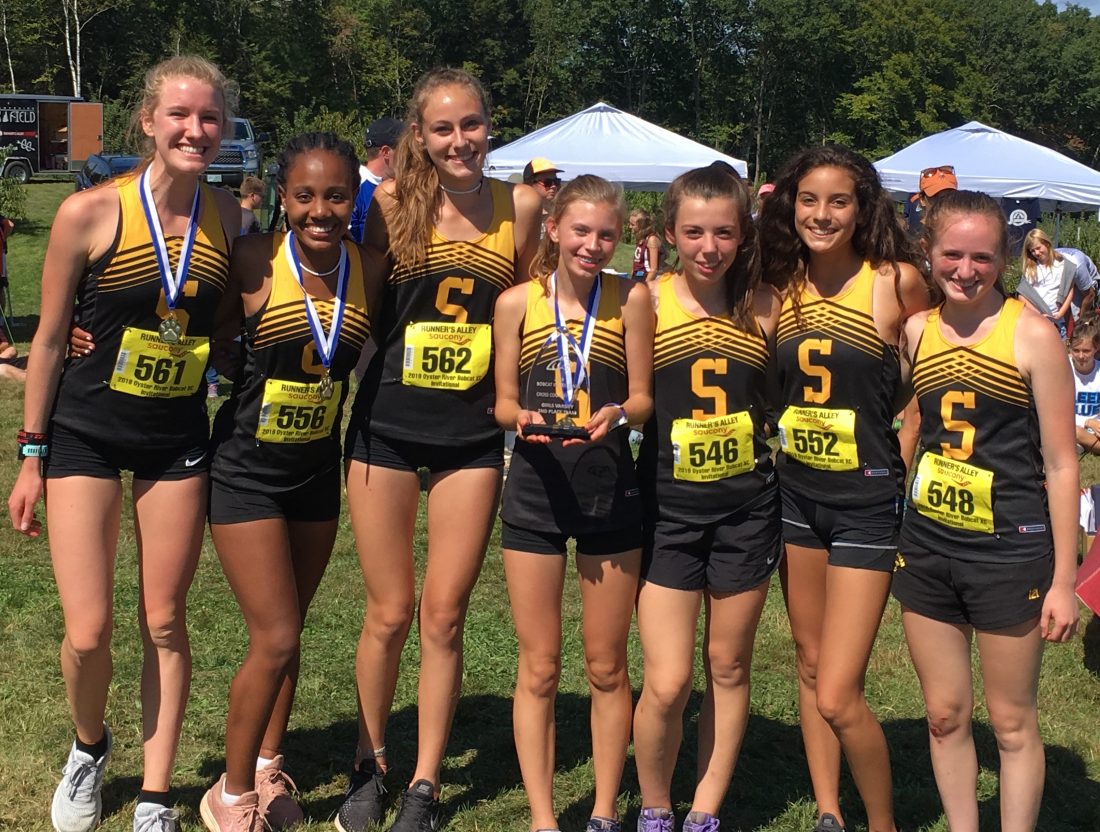 Courtesy photo The Souhegan girls cross country team is all smiles after finishing second at the Bobcat Invitational on Sunday in Lee.

Here’s a look at the local high school action:

The Panthers, trailing 2-1 at halftime, rallied early in the second half to knock the Broncos (5-1) from the ranks of the unbeatens in a tight one at Stellos Stadium.

“It was a battle,” Alvirne coach Marcos Vieira Filho said. “They (South) are a good team for sure. Very technical players all over.”

Teams were saying that, too, about the Broncos, who led 1-0 and 2-1. Charlie Thomas opened the scoring with a Nate Day assist. The Panthers evened things, but a Matt Fitzpatrick penalty kick gave the Broncos the lead back.

But South, which got goals from Emmanuel Orozco, Jake Dukeshire and Patrick Hyde, prevailed with a better second half.

“We had great combination passing in the second half with midfielders and forwards,” Panthers coach Tom Bellen said.

South hosts Spaulding at Stellos on Thursday at 6 p.m. while Alvirne hosts Exeter Thursday as well at 5:30 p.m.

The Cavs visit Bedford in a rematch of last year’s Division I finals on Wednesday while the Tomahawks are at Keene.

South improved to 5-0 with straight sets of 25-1, 25-11, 25-19. Carol Leigh Leatherman had seven kills and Alexis Farrell had five kills. Among others who played well were Natalie Boyle (four kills) and Kaitlin Fitzgibbon (19 point service run to start the night, eight aces).

In South’s 3-1 win Friday vs. Portsmouth, Kara Kelliher recorded her 500th career kill in the third game, a major milestone. She finished the match that night with 12 kills, two aces and eight digs.

The Panthers host Alvirne on Thursday.

The Cougars are now 3-0 after a 25-7, 25-14, 25-8 sweep. Caedran Sullivan had two aces and four kills, while Mallory Reczko had an ace and five kills. Other Cougar contributors were

Campbell is off until next Monday when it hosts another top Divison III team, Moultonborough.

The Titans (202) finished behind match winner Bedford (192) but topped Dover (207). Leading the way for North (8-2) were Chris McQuinn with a 37, while Bryc Zimmerman had a 38 and Eva Gonzales a 39. Spencer Champagne, Thomas Kelly and Brendan McMahon each had a 44.

The Broncos (239) finished behind match winner Hanover (199) and second place Keene (201). Noah Leclair led the locals with a 39 while Jack Dewitt had a 47 and Brett McKinley a 48. Hanover’s Pat Daley was medalist with a 35.

Chloe Trudel and Mackenzie Hayden captured first and fourth place respectively out of 124 runners to help the Sabers finish second out of 19 teams in the Bobcat Invitational in Lee. Phillips Exeter captured both the girls and the boys races.

In the boys race, Junior Ethan McFee and freshman Kariso Anderson both earned top 25 finishes as they paced the Sabers to sixth out of the 21 teams McFee was 20th in 18:04 while Anderson was 22nd in 18:17.