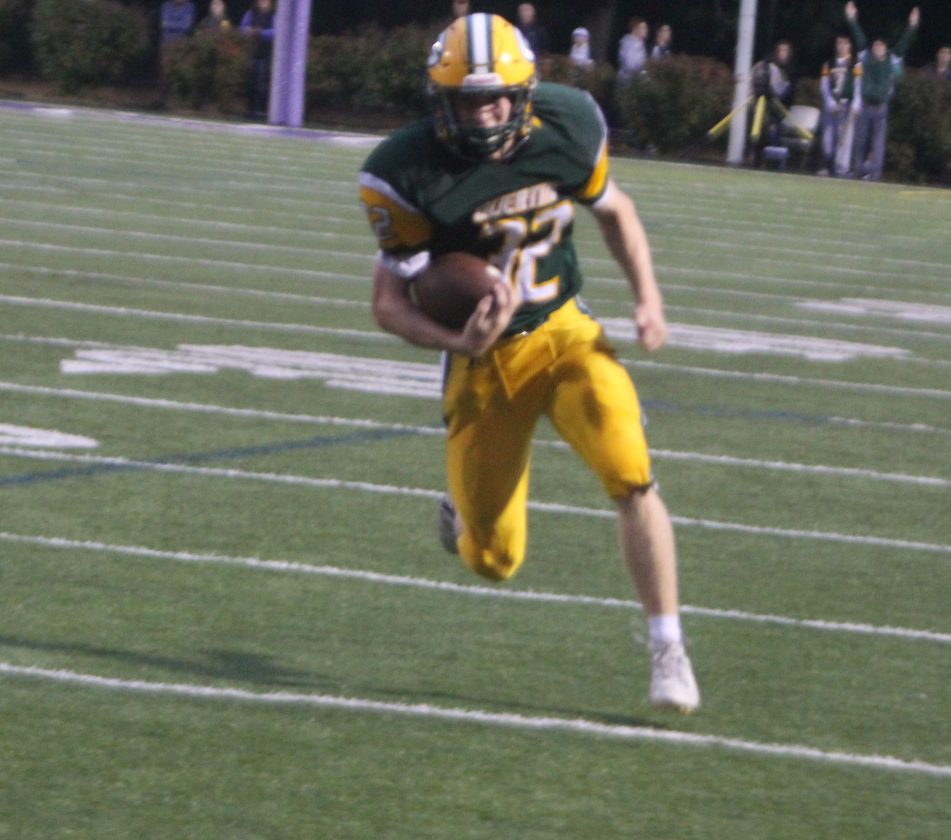 Telegraph photo by TOM KING When Joey Lupo carried the ball for Bishop Guertin in Saturday night's win over Nashua South, there was usuallly no one near him, as was the case on this 18-yard TD run.

That’s why they play the games.

Most figured the Nashua High School South football team would control things on Saturday night at Stellos Stadium in their West Conference opener against Bishop Guertin – including the Panthers themselves.

But it didn’t happen as they watched Guertin senior Joey Lupo, out of a Wildcat formation after another Guertin QB injury, rush for three scores in a shocking 20-0 Cardinal win.

“Completely shocked,” Nashua South coach Scott Knight said. “Based on last three days of practice, I thought we were going to explode. And we didn’t.”

“Joey’s definitely the best athlete (on the team),” Guertin coach John Trisciani said. “It doesn’t take a smart football coach to tell you that in a spot like that, you’ve definitely got to get the ball in the best athlete’s hands.”

Both teams are now 1-1 head into Week 3 looking to either reverse a trend or keep one going. South hosts Keene on Friday at Stellos Stadium and that could be a big bounce-back, feel good game for the Panthers. Guertin will be challenged by Portsmouth on Saturday night at Stellos.

But let’s not forget the 2-0 Nashua High School North Titans. They haven’t exactly played the iron in beating East Conference rebuilding teams Winnacunnet and Spaulding, but they’ve got arguably the state’s best player in quarterback Curtis Harris and should be favored at Dover next week. Merrimack put up more offense against the Green Wave in a 49-21 win.

Locally in Division II, Alvirne suffered a tough 13-12 loss at St. Thomas, so there’s ground to make up. Milford and Souhegan have started 2-0 and Hollis Brookline is 1-1. All three combined put up 124 points in easy wins.And Campbell keeps rolling, as the Cougars racked up 40 points in a win over Epping.

Lupo had never played quarterback before, “never in my life,” he said.

But he was a threat to score every time he touched the ball.

“”I just wanted to do my job,” Lupo said. “It was really unfortunate when Josh got hurt. I knew I had to step up, I knew it would be sometime, I’ve got to be prepared for everything. I just need to do my job.”

It may be his job again this week with the QB injury bug that is impacting the Cardinals.

They have played four at the position now since a week before the season started. Senior Hayden Moses went down for the year with a torn ACL in the preseason. Then Saturday night, Josh Larson, after runs of 25 and 15 yards, went down with an injury, which put Lupo in the shotgun. Guertin did change it up a bit in the second half on Saturday, inserting Dylan Santosuosso, a junior, who hadn’t had much experience at all but hit a 35-yard pass to tight end Kyle Baker during a drive in the third quarter that didn’t produce points but ate up clock with BG up 14-0.

“Obviously we’ve had some quarterback injuries which has been a challenge,” Trisciani said. “We tried to get (Lupo) ready over the last couple of weeks in case of an emergency situation and it happened. Joey’s definitely the best athlete we have.”

Trisiciani said that he wasn’t sure what happened to Larson in the first quarter, saying that the injury was muscle related. Cards trainer Katlyn Metzger informed him at halftime that Larson was done for the night. “I’m hoping I’ll get more information between now and next week,” Trisciani said.

But what does BG do now?

“Dylan Santosuosso has played in a lot of different positions for us. He had a really big pass play when we were backed up near our own end zone to Baker. He’s definitely another kid that will be in the mix, and then we’ll see where Larson’s at.”

Where did this win rank?

“That’s what makes high school football so awesome,” Trisciani said. “On any given night, somebody can outperform expectations. I’m jut really happy for our seniors.”

It’s not often you see a Panther team shut out – it did happen once last season at Stellos – and that’s why Knight says the Panthers “have a lot of work to do.”

South had a limited Jason Compoh last week, but the Panthers were without one of their best playmakers completely Saturday as he rolled an ankle in practice.

“He could give us a little bit of a spark on offense, but we’ve got a lot more than that to work on,” Knight said. “We didn’t do a great job moving. We didn’t move bodies. You’ve got to move people.”

And defensively, Knight said, “Usually if we’re playing a wildcat team, we’ll have a package in, but we didn’t have anything in. … But we made some adjustments. We knew what they were doing, but we didn’t have some people get to the right places. We’ve got a lot to fix.”

South’s best offensive play was a 31-yard run in the fourth quarter already down 20-0 by Compoh’s younger brother, sophomore Josh. And remember, the Panthers had two touchdowns called back by holding penalties the other night.

“We weren’t very disciplined,” Knight said. “We have a lot to clean up.”

Defensively, the Titans have been nearly flawless, giving up just eight points in four quarters.

Laurendi feels his players up front – Max Ackerman, Dylan McIntire, Travis Holbrook, Lucas Cunningham, Devin Bracetty, plus linebackers Justin Edwards and Spencer Whiting are just a handful of the players who have done the job on defense.

And don’t forget Curtis Harris, known for his play at quarterback, but he’s a premium defender as well.

“Our defense played a great role,” Harris said. “We had a great practice on defense, reading our keys and getting to the players to stop it.”

Harris has been a big part of that, playing in the secondary.

“He’s done that since he’s been a freshman, you know how physical he is,” Laurendi said. “He gets to the ball in a hurry.”

The Titans had a goal line stand in the third quarter, with Xavier Provost making a couple of key stops.

It was the first home game for the Tomahawks since the tragic death of former Tomahawk Alec Bronchuk in a kayak accident.

Bronchuk was a senior when the Tomahawks in the Class of 2020 were freshmen.

The death hit this team, and it was amazing watching the Merrimack players of all ages rally for the family.

“That was really hard. We have three-to-four guys who played with him, including myself,” said Merrimack’s Jared Dyer who caught a pair of James Dowling TD passes, ran one in and threw a TD pass to Devin Wood in the 49-21 victory.

“He was a big part of me growing up and becoming a better football player. He taught me a lot of lessons. I was very much looking forward (to Friday night).”

Merrimack High was all class on Friday night. Players, family and alums met on the field. The “Tribe” student section was flat-out immense, per usual. And the team delivered.

“It was an emotional night for everyone involved in the program,” said coach Kip Jackson.

OK, so through two weeks, the Tomahawks are one of three 2-0 teams in the East-West Division I cluster, along with Nashua North and Exeter.

So how good is Merrimack? Jackson wasn’t sure. But Dyer?

“We’re as good as we want to be,” the senior said. “Right now, we’re in a good spot, and that’s awesome looking forward.”

Merrimack won’t have to wait long to see where it stands. Friday night, the Tomahawks travel to Exeter.

Was the Hollis Brookline passing game supposed to be this good without senior slot man and top returning receiver Quinten Wimmer?

Sure, QB Sander Wimmer can spin it. But receiver depth could have been a question. Enter junior Blake Bergerson, who has 10 catches for 275 yards and an area best four TD grabs in two weeks.

“We expected him to have a big part in the offense this year,”said Cavs coach Chris Lones, whose club KO’d Hanover to move to 1-1 this week with the win over Hanover on Saturday.

“He’s tough off the line of scrimmage if you try to play him man-to-man. And he’s done it two weeks in a row against the best corner on the other team. That’s without ‘Q’ on the field.

“Also, Isaiah Velez (four catches) coming back really helps. His speed helps when he’s coming across the field. And he’s only a sophomore.”