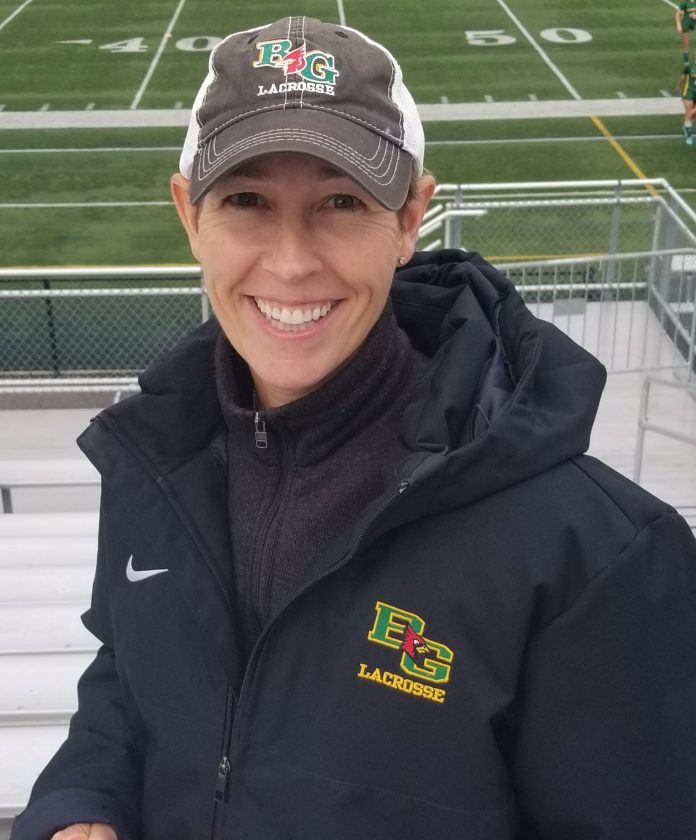 Telegraph photo by TOM KING Nashua's Leslie Why is all smiles as she was named as the new Bishop Guertin varsity girls lacrosse coach this weekend.

NASHUA – A couple of months ago, Leslie Why had no thoughts of seeking a varsity high school head coaching job for girls lacrosse.

But after serving as the Cardinals junior varsity coach the last three seasons, Why said she couldn’t pass up the opportunity when the Bishop Guertin job surprisingly opened up.

And the BG administration evidently felt it couldn’t pass up the opportunity to promote her as she was named as their new varsity head coach, fourth in program history, this weekend. She replaces the highly successful Kerry Gobiel, with whom the school stunningly decided over the summer to part ways after she won three state titles in five seasons.

“I was surprised (the job became open), and I wasn’t necessarily looking for something,” Why said. “It wasn’t ‘Hey, I want to be the varsity coach, I’m going after that position.’ But when it came open, it was an opportunity I couldn’t turn down. It’s a fabulous school with fabulous and great student athletes. And why wouldn’t you want the opportunity to build on Kerry’s success and Amanda ‘s (former coach Rogers) and (former coach) Ron Cote’s success.”

Why has an extensive coaching background, both in the U.S.and abroad. She played at Bucknell University and also for the Czech Republic Lacrosse World Cup team, and has been heavily involved in local lacrosse circles as a board member for Amherst Recreational Lacrosse as well as coaching for the Granite State Elite and New Hampshire Tomahawk programs. She’s also a huge fitness proponent, having competed in varsious Iron Man events and marathons.

Her JV teams the last two seasons have gone undefeated.

“I am confident Leslie’s passion, knowledge and overall abilities will keep the program going in the right direction and I know we won’t miss a beat,” BG athletic director Pete Paladino said in a release issued by the school. “Choosing Leslie as our new coach allows the team to maintain its high level of competition, gives us continuity in the program, and keeps the program in a great position to return to the (Division I) championship for years to come.”

Obviously, Why’s familiarity with the program’s players was a huge advantage in beating out two other finalists and in taking over the program.

“I’ve coached them in town lacrosse, Tomahawks lacrosse … I’ve watched them grow up,” she said of the players.

Of course, she has big shoes to fill in terms of what Gobiel accomplished – three titles, another finals appearance and a semis appearance in five seasons.

“Absolutely, there’s always the pressure to win,” Why said. “But my philosophy is you can’t control outcomes, you can control your daily process. You focus on the culture from a program-wide prospective. … You’re going to have a great outcome if you have a great process.”