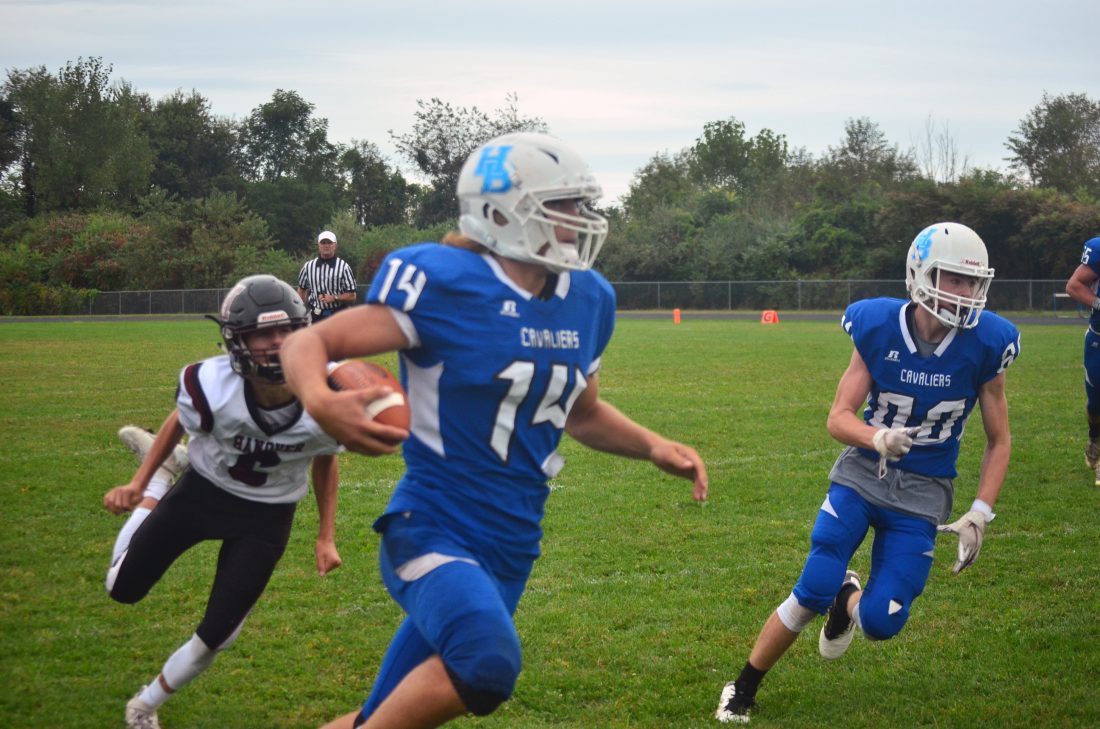 Sander Wimmer was good on the run and great with the pass in Saturday's Hollis Brookline win.

HOLLIS – A week after stumbling against Milford, the Cavaliers of Hollis-Brookline made easy work against Hanover with a 48-14 victory on Saturday.

The Cavaliers scored on each of their first six drives, beginning with a 38-yard strike from Sander Wimmer to Austin Johnson. Wimmer added additional touchdown throws to Shea Philbrook, Isaiah Velez, and Blake Bergeson while Jason Dejoie added a touchdown run from three yards out and Kyle Manley provided a 21-yard touchdown run.

Hanover’s offense was a mirror image of Hollis-Brookline’s efficiency. The Marauders could not obtain a completed pass until their sixth drive of the first half and that reception by Benjamin Williams fumbled just seconds after its completion, ending what had been Hanover’s first promising drive of the game.

The Marauders did manage to get one score on the board before the half, a 32-yard pass from Caleb Morse to Seamus Murphy with just eight seconds before the intermission. However, a missed extra point ensured that the clock would be placed into running time in the second half.

Williams provided a 32-yard rushing touchdown for Hanover halfway through the third quarter and Hollis-Brookline brought its starters back for one last touchdown. Initially, that touchdown was a 49-yard run from Wimmer, but a penalty negated that score, forcing Wimmer to connect with Philbrook for another touchdown two plays later that stuck.

“Honestly, I didn’t care too much. When (the touchdown) was called back, I knew our receivers could take their defensive backs, so I was like ‘dang, I guess another opportunity for a few more passing yards, I guess,” said Wimmer.

Hanover did get one last threatening drive that made its way just outside of the Hollis-Brookline red zone before Williams intercepted Hanover Quarterback Colin Pierce.

Given Hollis-Brookline’s long playoff rivalry with Hanover and last week’s difficult loss to Milford, the Cavaliers needed little motivation in this matchup.

“We felt coming into this game that we were the better team, but if you let the other team hang around, you’re going to have a hard time. Ever since I’ve been here, even before I was the head coach, we’ve had a tendency to have a tough time in games we should dominate,” said Hollis-Brookline Head Coach Chris Lones. “We let teams hang around and we didn’t do that today, we played well right from the start.”

Wimmer led all rushers with 75 yards on five carries, with the Cavaliers combining for 111 yards on the ground. Wimmer was 14-for-19 through the air with 249 receiving yards on the day.

Hanover finished with 139 rushing yards on 34 combined carries, with Pierce completing four of his seven passing attempts for 105 yards.

The Cavaliers (1-1) play on the road against ConVal next Friday at 7 p.m. Hanover (0-2) will host Kingswood at the same time and date.