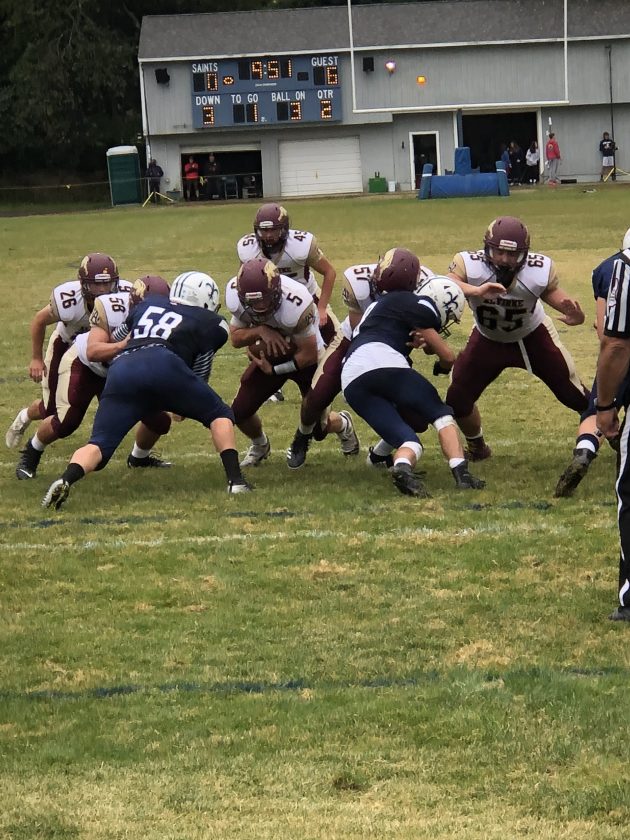 Kyle Gora runs for the Alvirne TD against St. Thomas.

DOVER – A successful extra point booted by a senior soccer standout playing in his first high school football game wound up being the margin of defeat for the Alvirne Broncos in a 13-12 decision in their first 2019 road contest at Saint Thomas Aquinas in Dover on Saturday afternoon.

The now 1-1 locals grasped a 12-6 lead until just 2:22 remained in regulation time when the home-standing Saints knotted the score on a short pass and then had 12th-grader Chase Gagnon – the starting goalie on the St. Thomas varsity boys’ soccer squad who was activated by the football team to play in the Saturday game – kick the extra-point through the uprights to make it a 13-12 contest. And coach Tarek Rothe’s Alvirne charges proved unable to pull off a late comeback despite an effort to do so. The Saints moved to 1-1 with the noteworthy success.

Having the game slip away in the late going was a punch to the gut for the Broncos, and you can bet that their bus ride home to Hudson wasn’t an entirely pleasant one.

The locals stepped into the Saturday road contest not having allowed any points in the young 2019 season. They got the campaign rolling the previous Friday night with a hard-fought, 15-0 defeat of visiting Pelham in Hudson.

The home-standing Saint Thomas squad bounded into Saturday play seeking their first victory of the new season after dropping a 34-25 decision to visiting Souhegan exactly a week before.

Alvirne began the Saturday game in great shape despite the soggy conditions, getting the ball first and putting together a 15-play drive which consumed more than six minutes and culminated with a 12-yard scoring sprint by quarterback Kyle Gora. A bad snap on the extra-point try negated hopes of a larger lead, but it was 6-0 in the locals’ favor with 5:42 to go in quarter one.

And the Broncos had their advantage grow to 12-0 a little less than three minutes into the second period when the locals cashed in on a glittering chance on a drive which began on the St. Thomas 12. Running back Alex Giuffrida capped off that four-play push with a 1-yard plunge into the end zone. The conversion attempt failed.

But the Saints clipped their deficit right in half with 2:42 to go in the half when they capped off a 10-play drive with a 6-yard pass connection from Cam Paquette to Hunter Lassard to make it a 12-6 contest. The PAT sailed wide left of the uprights.

And 12-6 was where the score sat as the two teams escaped the light rain for halftime, with the Broncos having tallied 176 offensive yards and their defense having held the Saints to a mere 51.

But the locals wouldn’t put any more points up on the scoreboard in the second half, with their offensive series’ ending with a punt, a fumble, two more punts, and then two consecutive turnovers on downs.

St. Thomas drove itself to the points it would require to take the lead and eventually win with a drive which commenced at the Saints’ 39 with seven minutes left to go in regulation and continued thanks to a big, 12-yard run by quarterback Paquette in a 3rd-and-11 situation with a little more than three minutes remaining.

The hosts knotted the score when Paquette lofted a 4-yard touchdown pass to Adam Stewart with 2:22 left, with new hero Gagnon making it 13-12 with his huge extra point.

The Broncos’ offense got the ball back for two offensive series over the final 2:22, but went four plays and out in both cases.

“They had a third and long and made the big play,” said coach Rothe. “They just made one more play than we did.”

The two teams finished extremely close both on the scoreboard and on the stats sheet, with Alvirne receiving 101 rushing yards on 23 carries and one score from quarterback Gora on the way to 204 total offensive yards. The victorious hosts amassed 197 offensive yards, with signal-caller Paquette connecting on 11 of 21 passes for 75 yards and the two touchdowns.