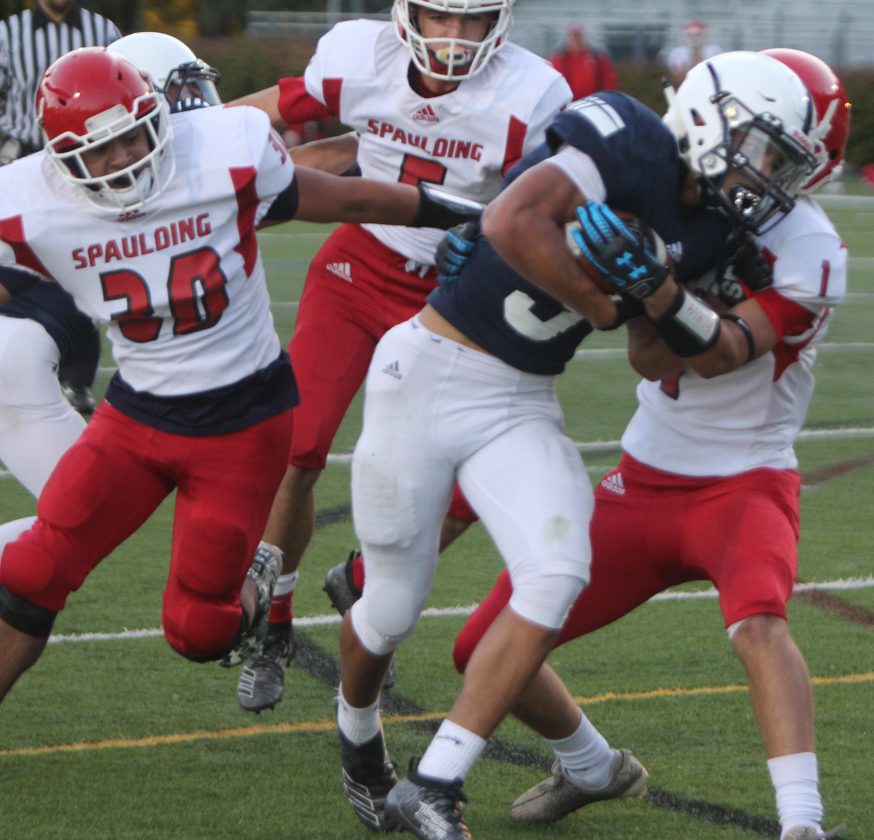 NASHUA – It’s been a pretty dominant start to the high school football season for Nashua North.

That includes Friday night’s 36-0 romp over Spaulding at Stellos Stadium.

“We’re running around, moving well, our team speed, getting to the football,” North coach Dante Laurendi said, his team now 2-0 on the young Division I seaosn. “Obviously there’s more to clean up, but we’re playing well together. We have to keep that up, because we’ve got some tough games ahead.”

As expected, much of the game was the Curtis Harris show, as the North quarterback ran for 168 yards and three touchdowns, part of an offense that totaled 322 yards.

“We started on offense, I started kind of slow, incomplete passes,” Harris said. “Once the run game started, my lineman played great giving me holes to run through. I was able to get into free space and run.”

Behind a line led by Max Ackerman, Spencer Whiting,Zach Masczak, Ruben DeJesus and Aidan McGrath, Harris ran for scores of 3, 3, and 30 yards in the first half. That was before North also got a 5-yard score by Anthony Greene with 7:24 left before intermission. It was over, as North led 29-0 at the break. The 24 minutes showed again why Harris at quarterback is even more dangerous than he was in previous seasons at running back.

“Where they put him schematically, Dante does a great job schematically, it’s very, very tough to account for where he’s coming from,” Hebert said. “But we knew that coming in.”

It could have been even worse but a Harris 56-yard TD pass to Provost was called back by a blocking penalty on North midway through the second period. Harris was 3 of 8 for 35 yards throwing the ball.

North began the fourth quarter, with Harris out, with Jayden Espinal 7-yard TD run to put the game completely out of reach, 36-0 with 10:48 left.

Defensively, the Titans held Red Raiders to 87 total yards and their work featured a goal line stand midway through the third quarter with two big tackles by sophomore Xavier Provost.

But the way the offense played in the first two quarters, it was over early.

“After that first series we kind of found our footing a little bit,” Laurendi said. “And obviously (Harris) is a heckuva player. Once he got rolling, I think the other guys got rolling around him.”