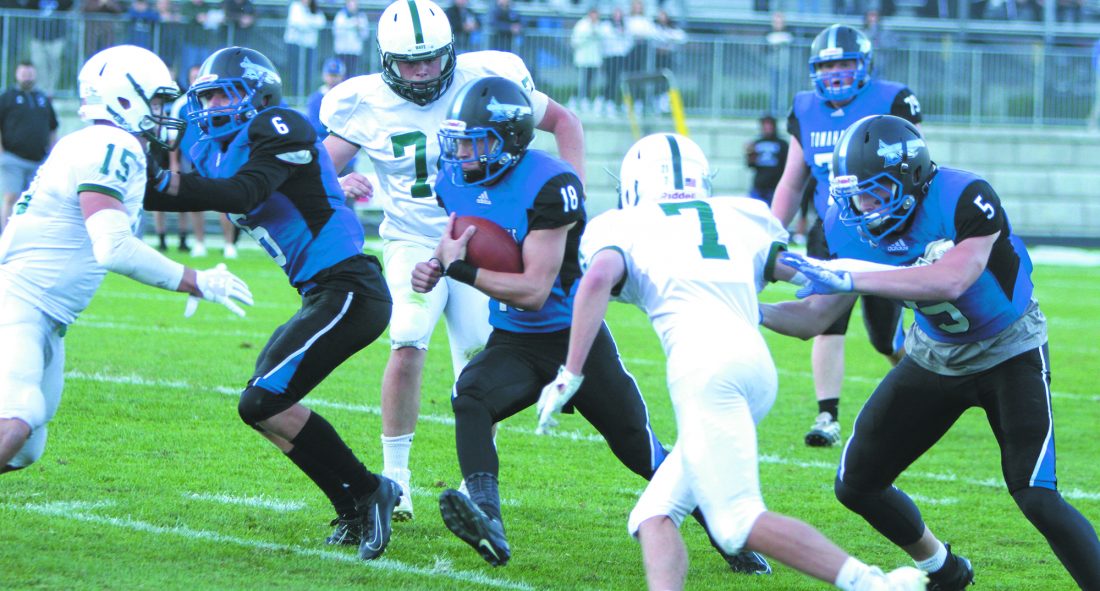 Telegraph photo by HECTOR LONGO With his backs working hard blocking, Zach Twardosky (6) on the left and Jameson Savickas (5) on the right, Merrimack High quarterback James Dowling cuts up field for a first down in Friday night's home win over Dover.

Wins are nice, but to the boss this group remains a bit of a puzzle.

“I have no idea (how good we are),” said Jackson. “I can’t tell yet. Last year, I had a very good feeling early that we’d be pretty good. I still have no idea where we are.”

Friday night, Jackson got giant plays from this prime-time performers, and despite a four-quarter bout of sloppiness, Merrimack flattened the Green Wave of Dover, 49-21.

The night began on a solemn note, with Merrimack players, alums, fans, friends and family gathering at midfield to remember Alec Bronchuk, who passed away tragically this past summer at the age of 20.

Emotion spilled into the game, and Merrimack used it to jump on Dover for a quick lead that the Tomahawks would not relinquish.

On an evening featuring the stars, none shone brighter than senior Jared Dyer.

The 6-foot-5, 240-pounder mixed his usual tenacious defensive performance with an offensive show.

Dyer hit the first-half trifecta with a four-yard TD run to open the scoring, a five-yard TD catch and a 27-yard option TD pass to Devin Wood, making it 21-0 with 8:25 left in the first half.

“It’s a great win. This was Alec’s game, and I’m so happy we could get it for him,” said Dyer, who added a second TD catch from James Dowling in the third quarter.

For the night, Dyer had seven catches for 73 yards. About the only time Dover could stop him was when he leaped and picked off a Wave pass at the Merrimack three in the fourth quarter. The big fella hit the jets, racing 92 yards before getting tripped up at the Dover 5.

Wood was all over the field, too.

The senior picked off three passes, one of which was a legit, SportsCenter worthy one-hander. He also with four grabs on offense for 105 yards.

Dowling clicked on 15 of 32 passes for 225 yards on the night with a pair of interceptions, and halfback Zach Twardosky was the workhorse in the backfield, carrying 15 times for 125 yards with TD runs of nine and 10 yards. Junior Jacob Bunis rounded out the scoring with a one-yard plunge after the Dyer pick, and freshman place-kicker Reese Lopez nailed all seven PAT kicks he attempted.

“Devin, James, Owen (Medlock), Zach … They all made big plays for us tonight,” said Dyer, who will lead the Tomahawks into Week 3 at 2-0 Exeter on Friday night.

“They’re going to need to keep making them all year,” said Jackson. They are all very good players and all obviously very important to this team.”