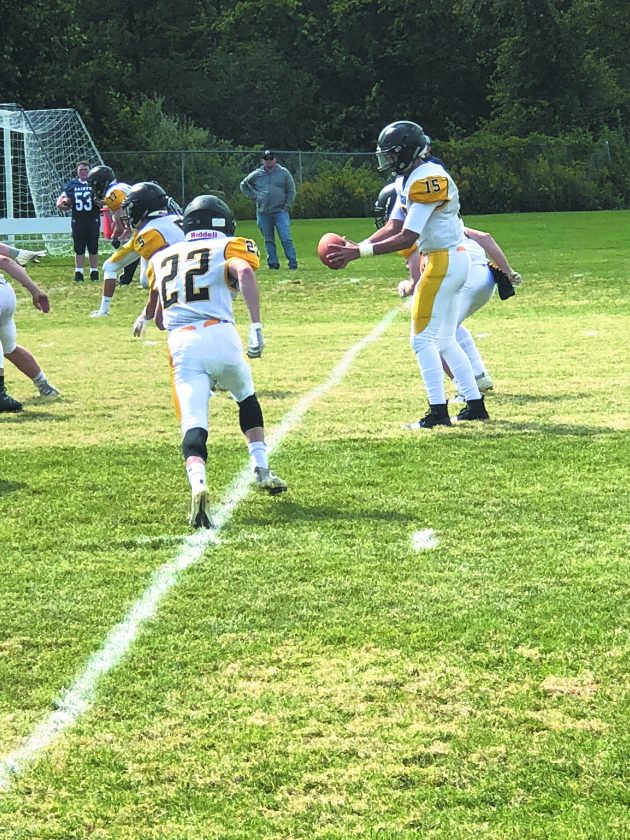 Souhegan's Austin Jain hands off to Ryan Hauser in the Sabers' 34-25 win over St. Thomas on Saturday.

DOVER – The Souhegan High School football squad faced a lot of challenges and tests in its season-opening contest at Saint Thomas Aquinas High in Dover on Saturday and did well enough with them to bring home a solid 34-25 victory.

Coach Robin Bowkett’s Sabers got important contributions from a bunch of sources – including both quarterbacks Austin Jain and Luke Manning – in besting a home-standing Saints’ squad which notched more than 300 passing yards but failed to put enough points up on the scoreboard to bag a win.

Souhegan exhibited a balanced offense with 173 rushing yards and 189 passing yards for a total of 362. St. Thomas was paced by its junior quarterback Cam Paquette, who lofted the ball skyward some 55 times and completed 30 of those tosses for 313 yards, four touchdowns, and one interception.

The local gridders scored the first touchdown of the game but found themselves trailing 13-7 at the end of one period. However, coach Bowkett’s bunch grabbed a 14-13 lead early in quarter two and never lost the upper hand, although the Sabers never got to the point where their lead became what one might call “comfortable.”

That being the case, however, Souhegan hung right in there against a tough opponent – on its own home grid – in what was a whole lot like a heavyweight prize fight from start to finish.

Going into the Saturday battle, the host Saints had beaten Souhegan three years in a row. And this time around each squad is striding into the regular season looking to replace a cornerstone quarterback.

Souhegan has options at the vital offensive position where California transfer Jain and Manning, both receivers, shared time in the preseason.

Jain took the majority of the snaps in the first half and completed 10 of the 16 passes he attempted, notching 139 yards with one touchdown.

The California transplant got his Sabers a 7-0 lead just three minutes after the opening kickoff by connecting with Manning on an 8-yard scoring pass which capped off a successful, 10-play drive. Will Boyle then added the first of four extra points he booted on the day.

The hosts then put together a 16-play drive which ended with 5:22 to go in the first quarter when the Saints scored on a 9-yard pass connection from Paquette to standout senior receiver Will MacLean, who wound up catching 10 balls for 120 yards with three of the Saint Thomas touchdowns.

With the score knotted up at 7-7, the host team collected what would prove to be its only lead of the day when it rolled up a five-play drive which culminated with a 60-yard scoring connection between Paquette and MacLean. But the PAT failed, and the Saints’ lead stood at 13-7 as the first period expired. The lead didn’t last long.

Souhegan reclaimed the upper hand at 14-13 on an 8-yard scoring sprint by Ryan Hauser with 9:27 remaining in quarter two, with Boyle’s successful kick giving his side the one-point advantage. And the local squad wouldn’t trail again.

Before the half was complete the Sabers added a touchdown on a 16-yard keeper by Manning and a 15-yard pass from Manning to Jake Civiello (with just four seconds left) to roll into halftime with a pretty pleasing 28-13 lead to contemplate.

However, coach Burkett and his bunch knew full well that Saint Thomas was all kinds of capable of a comeback, and any comeback effort would be centered around the passing game.

The Saints threw the ball on their first 12 plays – except for one punt – at the start of the third period, trimming their deficit to 28-19 on another MacLean score with 8:40 left in the stanza.

But Souhegan built its lead back up to 15 points at 34-19 in the first minute of the fourth quarter, with junior receiver Civiello catching his second scoring toss from Manning from 15 yards out to complete a 12-play drive.

However, to exactly nobody’s surprise the Saints refused to go away, scoring on an 11-yard pass from Paquette to junior back Adam Stewart with 6:40 left on the game clock to make it a 34-25 game.

That would be it on the scoring in this game, although Souhegan received a huge defensive play from Hauser with 2:52 left. In his defensive back position, Hauser went skyward and literally tore the ball out of the grasp of Saint Thomas receiver Quinn Wade at the Sabers’ 6-yard-line.

Versatile Souhegan junior Manning wound up leading his team in rushing with 82 yards and a touchdown on 19 carries, and completing four of seven passes for 60 yards and two scores.