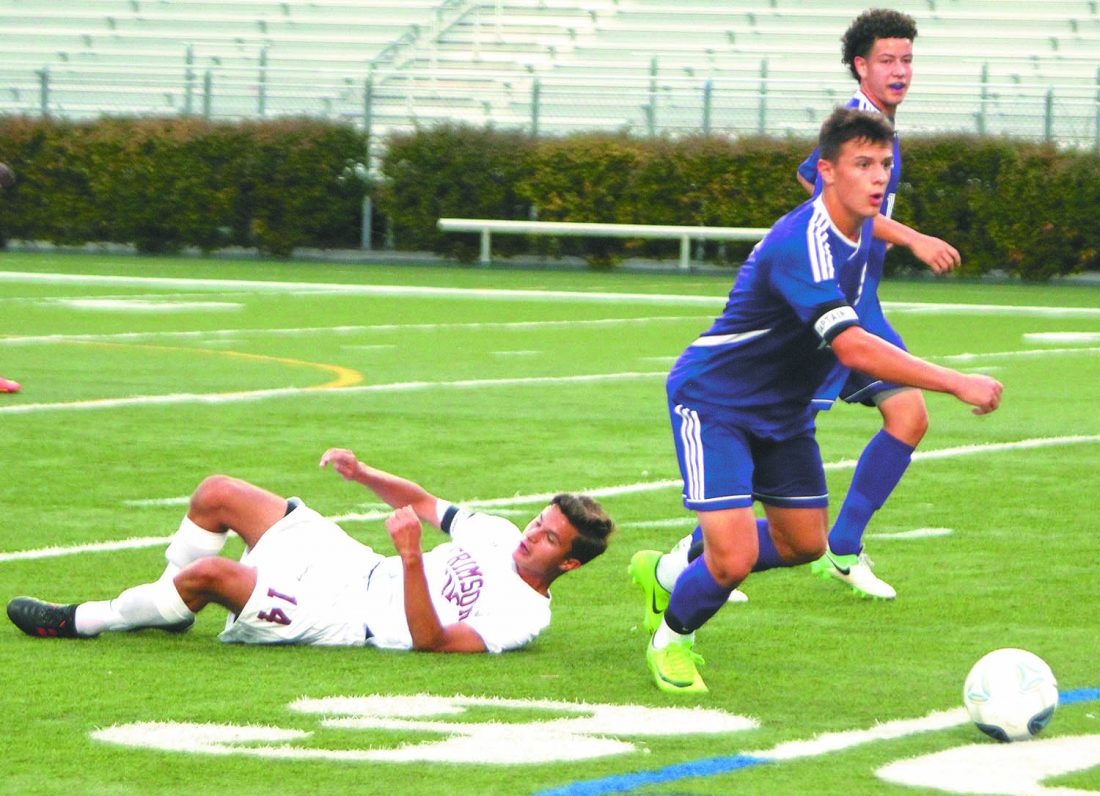 The Panthers jumped out to a 2-0 lead and enjoyed a successful season opener at Stellos Stadium with six different scorers.

Sam Gomes had two goals while goalie Jack Noury played well, shutting out the visitors in the first half. The Cougars, now 3-0, next visit Somersworth next Tuesday. Campbell has outscored its opponents 11-1 thus far.

Jack Schwab had three goals while Jacob Boette added a pair as the Warriors moved to 2-0. Other scores were by Matt Hadley and Troy Brennan, while goalie Joe Krug had four saves.

Down 1-0, the Broncos got a game-tying goal from Nathan Day (Jon Rudy assist) and then a game-winner by Brian Arlin with about eight minutes left in their season opener Tuesday.

Syd Thibault had an assist and goal to pace the visiting Spartans in a successful season opener. Emmy Jane Sullivan and Rachel Gizzonio each had a goal while assists went to Mikayla Thompson and Aspen Tlapa. Milford keeper Jade Gregg had 10 saves, giving up just a goal by MV’s Rhiley Tanguay. Renee Wilson anchored a strong defensive effort.

The Warriors, paced by Elizabeth Jacob’s five goals and an assist, improved to 2-0 on the young season. Goals were also scored by Sophia Sistachs, Brooke Lane, Samantha Yurcak, and Abbey Dowling.

The Sabers got two goals from Greta Caulton in Tuesday’s win, a goal and four assists by Savanneh Behn, a goal and three assists by Elle Stevenson, and single tallies by Georgia Jones, Jackie Hayden, Julia Pinkham and Anna Goyette. Joely Duprey added an assist while goalie Hunter Stonebreaker had six saves.

Other assists went to Sarah Coyle and Alayja Linton.

Monina Tosi had six saves for the Cards, who host Manchester Central Friday at Stellos Stadium.

It was a tough start to the season for the visiting Panthers, despite 15 saves in goal by Courtney Tello. South is off until next Wednesday at Exeter.

Leading the way for Campbell were Sean Ryan and Travis Breton, each finishing with 21 points via the Stabelford

Due to a reporting error, Merrimack goal scorer Carter Sherman was misidentified as Connor in the story of the Tomahawks’ 3-1 season-opening win over Bishop Guertin.

Also postponed were the Pinkerton at Merrimack and Bow at Milford field hockey games, rescheduled for today.

North at Dover field hockey was rescheduled for Monday.