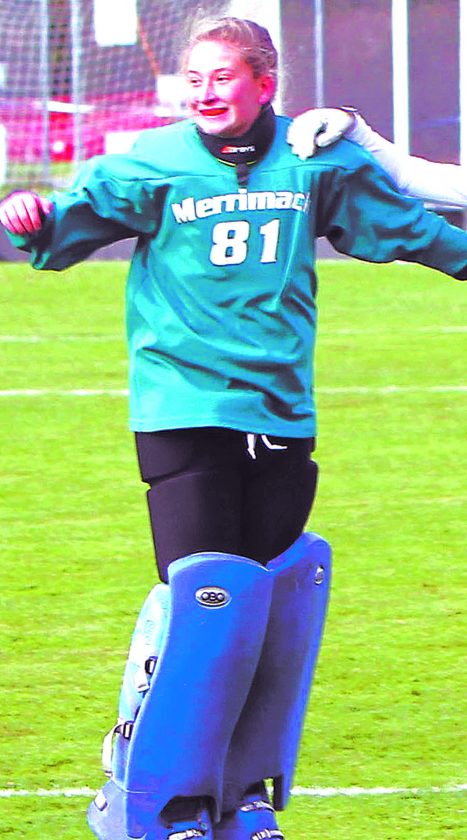 Staff photo by HECTOR LONGO The Merrimack High girls are all smiles after Sunday's Division I playoff-opening win over Londonderry. Included are: goalie Heather Rohr (81), Dee Gonzalez (17) and Chloe Kapsambelis (8).

Many of the names from Bishop Guertin’s state championship-winning lacrosse team hit the turf this fall, including title-game hero Abigail Ahearn, leaving folks around the Granite State to wonder if something big could be brewing this fall for coach Steve Duprat’s Cardinals field hockey squad.

First-team all-stater Sarah Coyle returns after scoring four goals and seven assists last fall. Ahearn was a second-team selection in 2018, while Brooke Yabroudy (6 goals, 3 assists) and Lindsay Hult (4 and 4) are among the top scorers back, among the eight returning starters.

Merrimack High should also be strong after a trip to the semifinals last fall.

First-team all-state goalie Heather Rohr was sheer dynamite as a junior. She’s back with a superb defender in Erin Knauer in front of her.

Both Nashua South and Nashua North look to be improving.

“As long as we can stay healthy, we are looking forward to being more competitive this year and playing some great team field hockey,” said South coach Ciki McIntire.

The Panthers look to be strong from the defensive end out where second-team all-state goalie Courtney Tello is back between the pipes.

Teammates Kirsten McIntire and Sarah Signorello have been stalwarts for years.

“Our top player will most likely be Lauren Shaw. She’s very skilled and plays at the club level with the Wizards from Massachusetts. “I also expect some big contributions from (second-team all-stater) Theresa Ellison, Lizzie Deck, Emma Tomasetti, Kenzie Smith, Maddie Goulet and Madlyn Phillips.”

Both Milford and Souhegan feature handfuls of top returners with an eye on bumping up the ranks.

Betsey Kallfelz’ Spartans feature a returning first-team all-stater in Sydney Kolasinski plus a pair of second-teamers in Erin Jasper and Caroline Boudreau.

Here’s a capsule look at each of the area combatants.

Coach’s Comments: “Our strength will be in the midfield with a talented group. Defensively we’re young on the back line. Biggest thing for us to be competitivethis year will be hustling for a full 60 minutes and not taking any plays off.”

Coach’s Comments: “I am very excited to coach this team this season. This team works very hard to improve daily and wants to perform to the best of their ability. This team will continue to be competitive every game and learn a lot in the process. Definitely a great bunch of fun and enthusiastic players.”

Coach’s Comments: “We are very young and a good number of the players are in their first year of varsity competition so it will be fun to see them progress throughout the season. We are looking to flip a few of the close scores from last year and maybe put enough wins together to advance to the postseason tournament.”

COACH’S COMMENTS: “We have had a great off season where many of our athletes made the committment to get better this summer. This preseason, we hit the ground running and the chemistry amongst the team is starting to gel.”

Coach’s Comments: “This being my first season at the helm of Hollis Brookline field hockey I hope to build upon the player’s core skills from past years to progress them towards a quality game of field hockey. The girls are working very hard this preseason to become a tight unit and improve their skill sets. I look forward to what this season is going to bring.”

Coach’s Comments: “With seven senior starters I look forward to a competitive season. Our emphasis in preseason has been on fitness and fundamentals and my athletes have risen to every challenge thrown at them so far.”

Coach’s Comments: “With a super strong core of returners mixed with some young blood who will challenge for starting spots all season, we are looking to use our depth of talent to build off of last season’s success.”