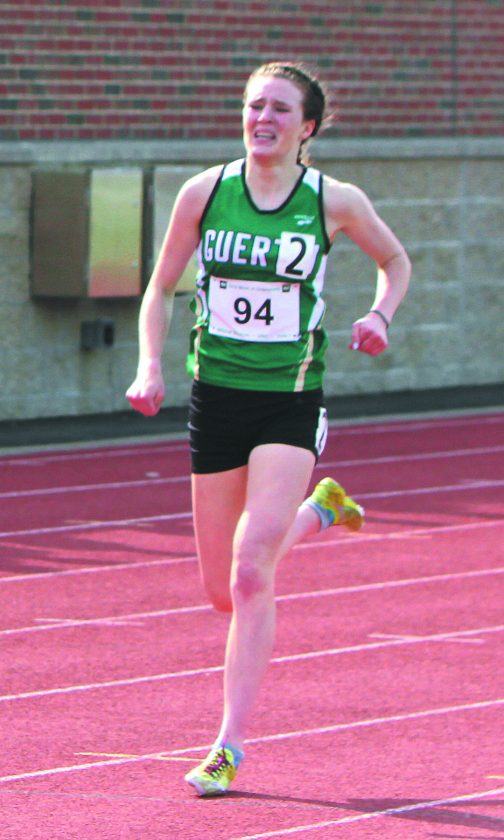 Telegraph photo by Hector Longo Bishop Guertin's Caroline Fischer rolls to a 4:54.67 clocking in the 1600 meters, and the junior was second to Kearsarge sensation Mya Dube in the race at Saturday's NHIAA Meet of Champions.

Cross country athletes will hit the

ground running on Tuesday, and excitement brews on many fronts, both girls

the lone defending state champ from

the region, as the top gun and the runner-up from the Division II State Meet

are back and hungry again.

“In the least we hope to make a return

to the New England Championships led

Towle and Fischer could have their

own trophy case at BG with what

they’ve racked up over three years,

nine seasons, with the Cardinals.

Depth is the one huge question for

Guertin, which placed fourth in Division I and seventh in the Meet of Champions a year ago.

Elizabeth White will be looking to raise

their games, while a pair of promising

Doherty have a chance to make an impact right away.

Elsewhere in Division I, South welcomes back Cali Coffin for her junior

season after what could best be described as a courageous sophomore

Leg injuries plagued her throughout

the three seasons. When healthy, Coffin

has proven she can run with anyone in

the state and run well.

The Panthers are young but will look

to better their ninth-place effort in Division I a year ago.

Alexander, and is bolstered by gritty

Both North and Alvirne are in rebuilding mode.

Durham to Pitt and Lauren Robinson to

the Meet of Champions.

opened some eyes with a rock-solid freshman year, just missing the top 10 at the

state meet a year ago.

Another sophomore coming off a

Chloe Trudel. She was All-New England

Englands. The Sabers, who return four of

II last fall and again look to be running in

Hollis Brookline looks to rebuild under

and Shandi Fetter head up what looks to

be a strong freshmen class.

out the win at the state meet, finishing second without a senior scorer. That bodes

well for the Cougars again this fall. Cassie

Hemming, Lyndsey Brown, Megan Whitnell and Riley Gamache were top 25 finishers in the state meet last year and all

are back and hitting their stride.

On the boys side, the tradition continues

at Nashua North where Rory Curran returns for his senior year. A state champ in

track, Curran was fourth in the Division I

for better this time around as the Titans

set their sights on a big late-season push.

“We are hoping to make the MOC on the

backs of our seniors then roll the dice to

“The rest of state is real strong with

some Division II teams being real contenders for New Englands, along with

usually cast from Division I (Concord,

“It’s a tough challenge but it’s a long

season and we are excited.”

If you’re looking for a Division I darkhorse, check out Merrimack, where coach

Kevin Champigny has most everyone

back, including a quintet of extremely

South, Alvirne and Bishop Guertin are

all working hard to bump into the top half

the biggest team numbers wise in the region, hoping that depth translates on the

is only a junior, and he’s coming off a top10 finish at the state meet last fall.

He and classmates Mason Arsenau and

Caeleb Fortunato will again anchor the

are the lone experienced returners for a

Souhegan crew that placed fourth in Division II a year ago.

Hollis Brookline is still young, but Jacob Dwyer and John Kotelly put together

solid freshmen campaigns for the Cavs.

They could be ready to make a move.

Unlike the Campbell girls, the Cougar

boys were a senior-driven bunch in 2018.

They’ll be looking to reload following the

and a handful of others.

last year, is the top returning finisher for

Coach’s Comments: “This year, we have a very

young team. Coach Sue Sawyer and I are excited

to spend this year rebuilding the team.”

scoring runners and adds two promising sophomore runners to our team. This team has the

pedigree to be state champion contenders as long

as all stay healthy and hungry for a title win.”

Coach’s Comments: “The Merrimack girls are a

team focused and welcoming to the newcomers.”

Coach’s Comments: “We lost a huge part of

our team, but our summer training was great and

the returning girls are ready to step up. The girls

are committed, excited, and having fun. Our big

goal is to continue to build on our summer training

to see some awesome results on the course.”

Coach’s Comments: “With a lot of talented

freshmen joining the team, we look to build into a

Coach’s Comments: “We’re looking for this

team to return to the Meet of Champions for the

third year in a row.”

Coach’s Comments: “We have some strong

back in very good shape. If we can stay injury free

I believe we will have a very competitive season.”

Coach’s Comments: “We could not be more

excited about the number of boys out for cross

country. Their enthusiasm and work ethic has been

Coach’s Comments: “We have almost our

a lot from their experiences over the last couple of

years. It’s a deep and promising team and we’re

looking forward to a strong season.”

Coach’s Comments: “As always the season

will depend on them running together and finding

a few more to complement their efforts. It takes

many more than just four to be a team. Fortunately

we have a few coming back and coming into the

program that could be a real big help.”

Coach’s Comments: “This season is going

to be a great turning point. Athletes have trained

hard during the summer, we have clear goals and

expectations, and we are ready to do what is necessary in order to have a successful season.”

Coach’s Comments: “With a lot of talented

freshmen joining the team, we look to build into a

2018 Results: Did not place in Division II

juniors returning, so we hope to be top 10 at the

Coach’s Comments: “Take one meet at a time

and look foward to October for the state meet.”