North’s Laurendi set to take on an added role 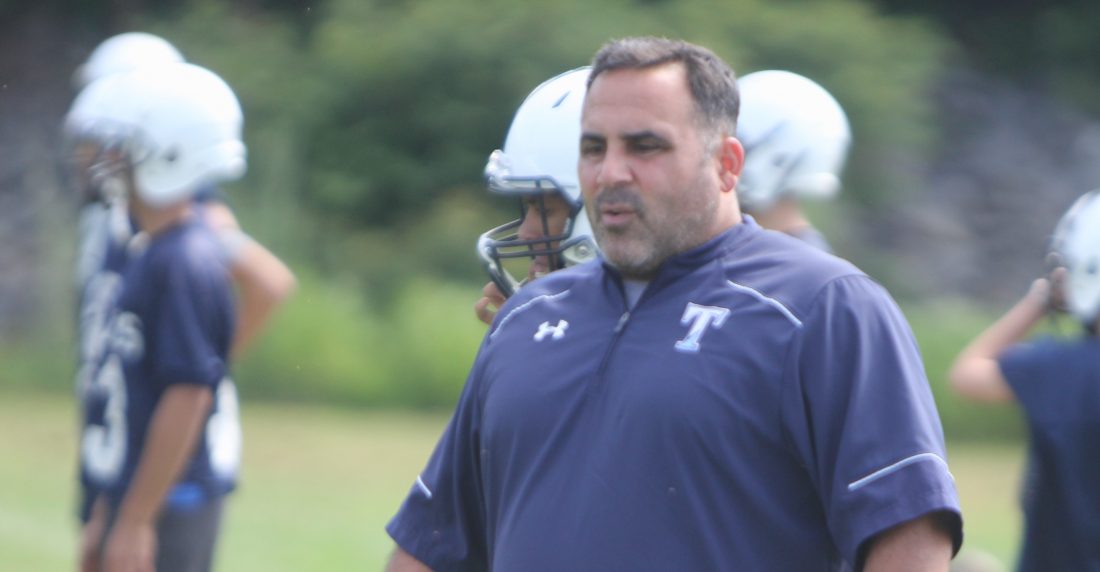 Staff photo by TOM KING It will be a different school year for Nashua North football coach Dante Laurendi, who is also now the school's athleteics coordinator.

NASHUA – The upcoming school year will be a very different one for Nashua High School North football coach Dante Laurendi.

You see, in addition to his football coaching, Laurendi has now taken on the role of North athletics coordinator, replacing longtime coordinator Scott Mays, who left for a teaching job in Washington, D.C.

“A little bit of a change,” Laurendi said. “I wanted to get more involved in the other side of things.”

Athletic coordinators basically handle a lot of the day-to-day, nuts-and-bolts athletic issues, such as scheduling, transportation, practice times, game coverage, etc., at their school as a representative of/assistant to Nashua overall athletic director Lisa Gingras. Laurendi is a fixture at a ton of North atheltic events other than football, anyway, and is always around the school after hours.

“Obviously,being around, I do the weight room a lot in the off-season, I’m always around the other athletes,” Laurendi said. “My kids play multiple sports, just being there.”

For the last several years, he’s been working the in-school suspension room.

“This is opportunity to work on a different side,” Laurendi said. “I get to work with kids who are on the Student Athletic Leadership Council, work with those kids, get more involved with different aspect of the school community, which I’m looking forward to.”

Laurendi went to the athletic director’s training session held by the NHIAA in Concord recently.

“It’s fun seeing the other side of it,” he said. “I went to the AD’s training, it was really, really eye-opening as to how much stuff there is to juggle.”

“Obviously I’m lucky working for Lisa, who’s outstanding,and I don’t think people have any idea of the scope of what she deals with, especially at a district this size. So I’m very fortunate that I’m just an assistant at this point.”

Laurendi got word midway through last year’s school year that he got the job, so he’s gotten the jump on things in some ways.

“I’ve had a little bit of a head start,” he said, “as far as her going through some stuff with me early on as opposed to starting from scratch on July 1.”

“I’ve always been a guy who’s encouraged kids to play multiple sports,” he said, “so to now be more involved and watch other people. And it’s a great aspect for me to learn from other coaches.”

There will definitely be a lot to learn. Laurendi will now be at Conway Arena during the winter and Stellos Stadium in the spring.

Having a coach of a major sport do the coordinator’s job is nothing new under Gingras, who tabbed longtime Panthers’ boys basketball coach Nate Mazerolle for the similar job at Nashua South. Gingras helps out more with the day-to-day South issues during the winter, but Mazerolle has made it work by also being at other non-basketball events.

Ironically, when the positions were first established at North and South, former Nashua athletic director Tom Arria didn’t want coordinators coaching major sports. North’s first coordinator, Wil Henderson, had to give up the head baseball job and in some ways it began a bit of a revolving door that had set the program back a bit.

Now, under Gingras, things are different and that won’t happen with football.

“It’s going to obviously for me be a long schedule in the fall,” Laurendi said. “But we’re going to have other people, teachers and other coaches have offered to help out as far as game coverages, being at places when I’m practicing or have games that can help cover my role when we need it.

“Lisa will be be more at North in the fall because Nate will handle (South). So we’ll utilize that.”

Either way, Laurendi will be busy.

And, as he said, he’s at a lot of North games anyway because of his son and daughter playing sports. He knows the territory.

“Spring is nuts because of all the cancellations,” he said. “Especially last spring.”

Saturday is the first day that football teams can scrimmage. North, with multiple fields (practice and game field inside the track), will be hosting a six-team scrimmage with mainly Division II teams. Nashua South will be at Exeter for a tri scrimmge with the Blue Hawks and Rutland, Vt. The Panthers will also scrimmage at Winnacunnet next Friday afternoon, and they turn it into a field trip, going to Hampton Beach afterwards. Campbell will be competing in the annual Kingswood Football Jamboree on Saturday, Aug. 31; Alvirne and Bishop Guertin are set to scrimmage on Monday afternoon at Alvirne; Merrimack scrimmages at Pelham on Monday afternoon, while several local teams will be in the annual Manchester Jamboree next Friday at Gill Stadium.

It’s scrimmage time for the other sports, too; the main one for soccer will be the annual Bedford Jamboree, this Saturday for girls and Sunday for the boys; field hockey has a big jamboree in Dover on Saturday and volleyball has a jamboree at Salem High School Saturday, beginning in the morning and continuing through the afternoon.