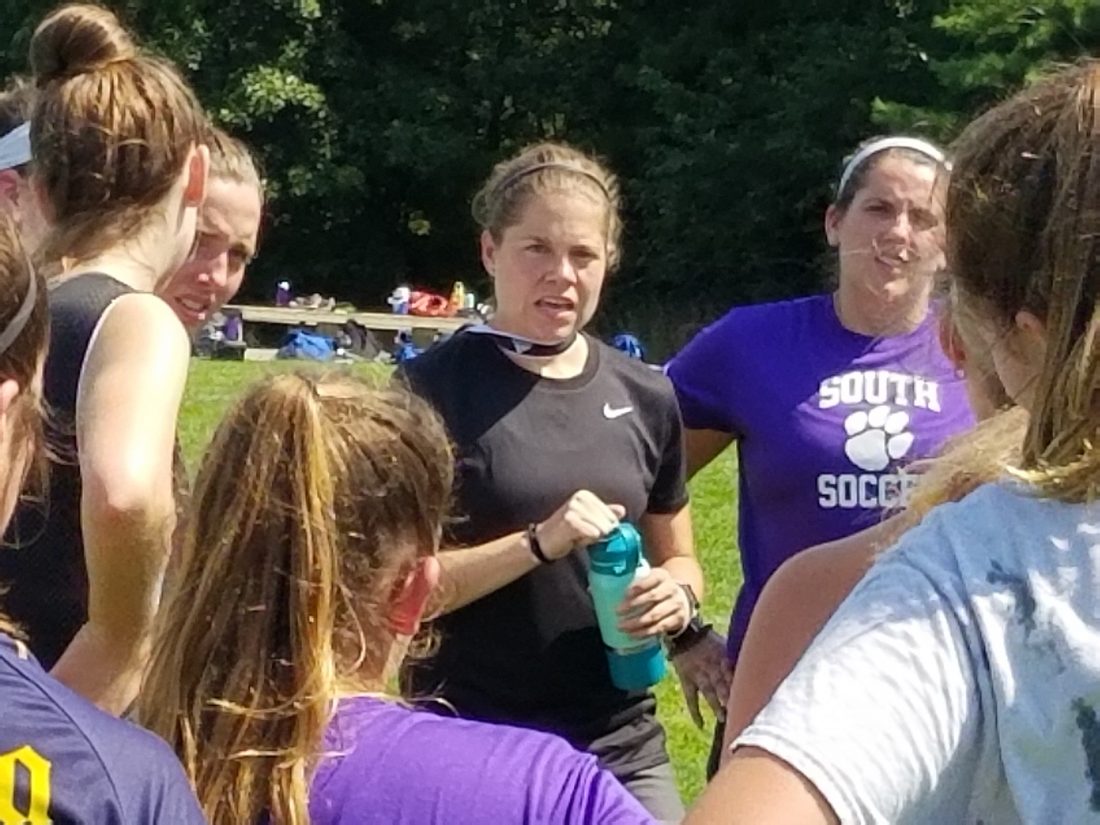 The former Nashua High School North goaltender is officially back home, although the one-time Titan is now a Panther.

And really excited to be a head coach for the first time in her coaching/soccer career.

“I’ve always wanted to be one,” said Keating, who just finished up a three-year stint as an assistant at Lowell High School. “I think I was more nervous. The buildup was worse than the actual first day. It’s a lot better now that we’ve gotten out here (to practice).”

Keating was hired at South to be a special education teacher, and was the logical choice with her soccer background to take the Panthers job that became open when former head coach Tom Bellen switched over to coach the South boys after six years running the girls program.

Keating,who graduated from North in 2007, was a starting goalie for three years at Assumption College, and she said playing there gave her great experience to become a coach.

“I had extremely knowlegeable coaches in college,” Keating said. “I learned so much about the game. Even when I was playing sports growing up here, I learned how to be disciplined, I learned how to be a student athlete. I had so much of the skills drilled into me on what it takes to be a good athlete, a good person, the character part. Then I went to college and learned so much about the game, tactics.”

As Keating noted, “My job in college was playing soccer. You had to not only know your position but everybody else’s. That’s where I really learned the game.”

Coaching at Lowell was her first experience at the high school level. She saw a lot of similarities to Nashua – strong athletic history, pride in the sports teams, big stadium like Stellos, “and a lot of people who have been there for a long time and pay attention to what is going on.”

She missed soccer for her first three years of Lowell, when she focused on establishing her teaching career. But her first job coaching soccer was at a middle school in Springfield, Mass.

“It was so much fun,” Keating said. “The boys really didn’t know what to do, they had never had a female coach. I was the only female coach in our middle school league. Actually it was fantastic. She was so respectful, so polite. The other boys we played against were the same way. They were like, ‘Oh, what’s going on’.”

Keating has no questions about what’s going on with the Panthers, who made it to the quarterfinals the last two years, losing to Bedford in 2017 and Londonderry last year.

“Tom’s left them in a really good position,” she said. “I can build off at what he did, and keep it going.

“Building relationships with players is difficult. You have to balance being their coach and wanting to win, and also they’re coming off a very close-knit program, having a coaching change, too.”

“So far it’s going pretty smoothly,” South goalie Kendra Santoro said. “It’ll be interesting to see how it (the switch in coaches) all works out.”

Keating has Harley Cleary as JV coach/assistant to help. But what helps Lauren Keating the most is the fact she’s finally home.