It’s the preseason to the preseaon for school football 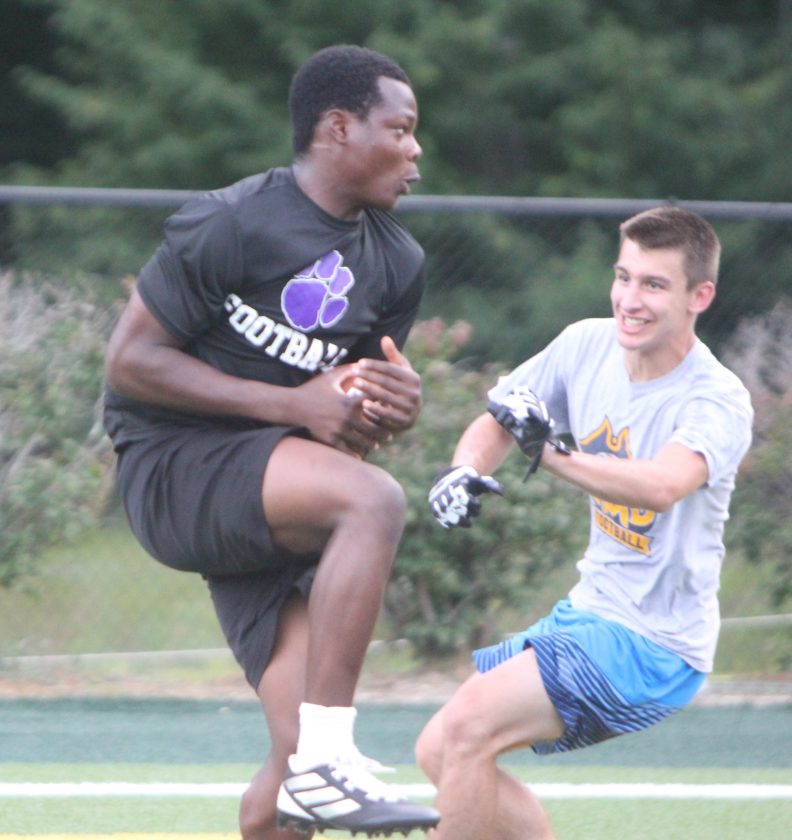 NASHUA – For local high school football, it’s the preseason for the presason.

High school football practices across the state begin Friday, but there’s been plenty of football taking place already. Thursday nights this summer Stellos Stadium has been booked and a busy place, with as many as five high schools having football players running around catching passes.

It’s a popular summer football tuneup for athletes all over the state, and the region. Exter usually has a big 7 on 7 tournament in July, and the competitions are built around the passing game.

At Stellos, at times it’s been South, Hollis Brookline, Windham, Pelham, and North Middlesex, Mass. In the most recent session, it was just Nashua South vs. Windham, but there was plenty of activity with each team’s upperclassmen working against each other at one end of Stellos and the younger players at the other end.

But it’s like a practice, as coaches for both teams shouting out instructions and giving immediate critiques or kudos.

“Everybody does it different,” Nashua South coach Scott Knight said. “It’s definitely a thing we like to do. Some schools like the tournaments, but teams treat it for what they want to get out of it. It’s how you approach it.”

This warm sumer night at Stellos, South and Windham basically just went back and forth, no score kept. It was like a touch football scrimmage, players in shirts and shorts.

Remember, NHIAA rules allow for coaches to supervise open get togethers for their sport in the two seasons before theirs, as long as they are open for anyone to come. For football, those months would be in spring and summer.

For the players, it’s fun. Quarterbacks, receivers, running backs, and heck, even some linemen get to go out and catch passes.

“The 7 on 7s are always fun,” said Nashua South junior receiver Jason Compoh. “You get some competition against people and then some like real actual battling going on because it’s not against your teammates. It’s all for fun.”

“It’s a real good time for the team to get together, work together,” South senior Kyle O’Connor said, likely a tight end/outside linebacker this fall. “We usually don’t get to come together during the spring or winter. It’s good to get all of our passing things done so we get a running start in the summer.”

“Football is different,” South senior running back/linebacker Joe Buturla said. “You just get a bond with everyone that’s like no other, and this is just to add on to that.”

Knight will have his players run their base defense and offense.

“It’s not really an indication, and we’re not playing to win,” Knight said. “We’re just running our stuff.

“Since it focuses on the passing part, I guess you can practice moves that you normally get to do in a game,” said Compoh. “Basically get more of a chance to have like those crazy moments, catching a pass over someone, thing like that.”

Also, if there are new players, such as transfers, coaches can get a sneak peek. “It gives us a chance to teach them what we do, get a look at them,” Knight said. “And we always have a few kids who didn’t come out last year and are coming out for the first time. … It gives us all summer to work with them.

Compoh feels it keeps a player in rhythm leading into the actual high school preseason. Also, don’t think it’s just for the offense.

“We do offense, defense,” O’Connor said. “At outside linebacker, we get to go into pass coverage, so it’s work. Everyone gets to work on both sides of the ball.”

When they first tried it, many didn’t know what to expect, or exactly what it was.

“I didn’t do it my freshman year as I was in Virginia,” Buturla said. “But since sophomore year I’ve been doing it every year and it’s been a blast.”

Buturla didn’t exactly know what it was until he showed up.

And sometimes Buturla will get moved out to the slot position from running back, so these plays help.

“You can move people around without having them have a lot of pressure,” Buturla said. “It’s so much fun.”

Do the players learn anything? You bet.

“Absolutely,” O’Connor said. “With all the other teams that come, we get to see different looks. Different things we might see during the season, so we get to adjust to it now.”

There may not be much pressure, most of the players in the veteran competitions are starters.

“It’s first string vs. first string,” Buturla said, “so you have to step up your game, and it’s good.”

Also, with the attention the coaches give it during the actual mini-competitions, kids can shine and make an impression for when things begin on Friday.

“Definitely, definitely,” Buturla said. “Even the linemen, they’re doing their own drills. Everybody has to play their coverage, especially cornerbacks and safeties. This is their time to shine. They have to step up their game the most.”

But, Knight said, a player can’t win a starting job with a good 7 on 7 night or two, or more.

“I mean it helps,” he said, “but hitting and blocking and tackling is a big part of our game. And (quarterbacks) may look good out here, but how good will they look with people bearing down on them, pads on, they’re going to try to take them down. It’s a different story.”

But, there are other benefits.

“You can work on your timing,” Knight said. “We do counts for the quarterbacks, four seconds with the ball coming out. You can try to simulate as much as you can, but there’s nothing like putting the gear on. And it’s easier to throw without gear on.”

In other words, touch football doesn’t translate into tackle football.

“No, but hands, and you run the right rout, drop into coverage the correct way, that’s important,” Knight said.

Thus, when practice starts today, some players may be ahead of others, thanks to 7 on 7 ball during the last eight weeks or so.

“For our kids,” Knight said, “it enables them to hit the ground running.”

And all that running is now underway. From one preseason to another.

“I’ve been doing it ever since I was a freshman,” O’Connor said. “Every Thursday. I love it.”