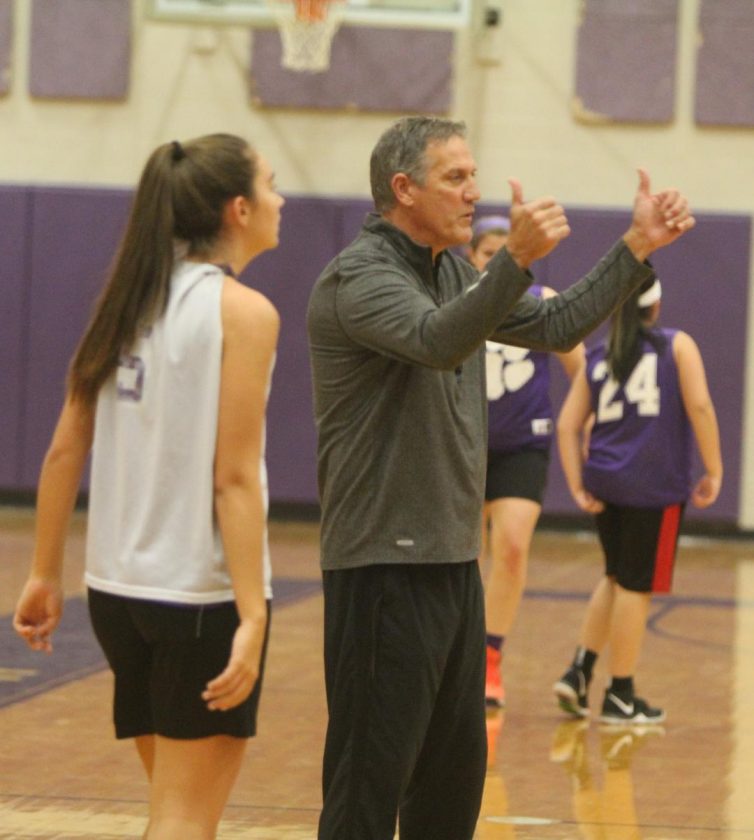 Telegraph file photo by TOM KING Nashua South's Doug Booth gave his switch from coaching track to girls basketball two thumbs up last year; he has since made the switch back to track, meaning the Panther girls will have their fourth head coach in four seasons.

Local high school football teams begin practices this Friday, and most if not all of the other sports will follow next Monday. And, of course, there are some fall coaching changes to note as well.

But it’s the winter that grabs the spotlight in Nashua. Suddenly, both the Nashua High School North and South girls basketball programs are without head coaches.

What happened? South coach Doug Booth, who took the reins a year ago, opted to return as the South head boys track coach. And Christina Bean, who has coached the Titans for the last three seasons, stepped away for what has been rumored to be family reasons, although not confirmed.

Thus, suddenly, Nashua athletic director Lisa Gingras is more or less under the gun to find two head coaches to get both girls programs, which have struggled in recent years, back on track. And with South, the Panthers will now be on their fourth head coch in four seasons.

“I’m hoping to fill both by the end of September, if not before,” Gingras said, saying she is putting together a committee of representatives of both schools to make the two hires all at once. Gingras would not get specificic as to the makeup of that committee.

Gingras says both positions have been posted and are attracing interest.

“There are some pretty qualified potential candidates that have gottn their resumes to me,” she said.

The Booth departure was in some ways surprising, just as his hire from the Nashua track community was.

But Booth felt the track program at South was in the good hands of his former assistant, Keith Lewis. But Lewis has since moved away, prompting Booth to reassess..

“I felt I wanted to make sure my work over the past seven years was not incumbered by a new coach,” he said. “I am getting very good response from the boys and feel both programs would benefit from my return to the track program.”

“It’s always difficult when you lose a coach, and you have to respect their personal decisions and be supportive,” Gingras said.

“Throughout this decision process I have had complete support from Lisa to either return to basketball or track,” he said, “and have that is really appreciated.”

Suddenly, Gingras is dealing with a longevity issue, which both programs sorely need. As she said, “I’m looking for coaches to come in and provide long term stability and longevity.”

One way to try to do that is to look at the candidates backgrounds, she said. If they’ve been coaching at several different places over a short time, that might not be a fit. “You look at how many coaching jobs they’ve had in five, six, 10 years,” she said, “and use the reference checks.”

North went 5-13 last year and South went 6-12, but both snuck into the tournament before being eliminated early. It’s a far cry from the glory days of Nashua’s girls basketball past.

Meanwhile, the fall is bringing about some changes, again at Nashua South. Longtime girls soccer coach Tom Bellen is taking over the boys program after Joe Morgan suddenly resigned last spring. Taking over the girls’ reins is Nashua North and soccer alum Lauren Keating, who will be teaching in the system and has been an varsity assistant/JV coach at Lowell (Mass.) High School the last four years and was a goalie at Assumption College from 2008-10.

She has the qaualities, Gingras said, “to be a very effective head coach.”

Meanwhile, Gingras said when Bellen took the South girls job six years ago, he said he’d commit to four years and stayed six, with two quarterfinal tourney appearances. When Morgan stepped down, Bellen made it known almost immediately he was interested in taking over the boys job. The Panthers have been tourney teams the last few years, but did not get past the first round the last two, losing a heartbreaker to Salem last fall in penalty kicks after the Blue Devils tied it with just seconds left in regulation.

“I had a vision for the girls program and got it to a place where I felt all the goals were met,” Bellen said in a text message. “Playoffs. Top six team. Competitive. Good culture and environment.

“I’m looking to do similar with the boys program and have them more involved in the community, more accountable for their program.”

Bellen said he looking to “appeal to some of the ethnic population to see if we can get more to try out on a consistent basis. South’s record has been good but (the boys) do poorly in playoffs so I want to see consistent playoff wins.

“I’m basically looking to build a program and culture vs. just being a team.”

With the change, Gingras said she is currently looking for a boys JV soccer coach.

There are more new coaches. Nashua North has hired a new varsity field hockey coach, Robert “Ruppy” Hailey, the in-school suspension teacher at Pinkerton Academy who more known for his lacrosse coaching, as he is the head boys lacrosse coach at Oyster River. He’s also coached field hockey at the middle school and JV level, Gingras said, and wants to get more involved in the sport on a higher level.

Meanwhile, could he be a candidate for the North varsity lacrosse position? That slot is now open as last year’s coach, Nick Sampson, surprisingly stepped down after only one season at the helm.

“Potentially,” Gingras said, but noted it might be tough to lure him away from the Oyster River job,which pays more. But she’s glad she has him in the fold at least for the fall.

“When I called one AD for a reference, they said two words,” Gingras said. “‘Hire him.'”

Meanwhile, at Alvirne, principal Steve Beals won’t have to coach girls varsity soccer this fall. That’s because AD Karen Bonney has hired Jerry Ruigrok to take over the program. Ruigrok has been a constant in the Hudson soccer community, coaching the Hudson United program’s boys and girls teams for 13 years and has been its coordinator for the last four. He played four years at Utica (N.Y.) College.

“He came in midway through last year and helped out Steve,” Bonney said, “so there’s some familiarity there. He’ll do a good job.”

If the name is familiar he is the husband of Alvirne girls tennis coach Jen Ruigrok. So there’s a strong connection to the school.

Remember, last year Beals had to step in on an emergency bases and coach the varsity after it went through not one, but two head coaches during the short preseason. Bonney had to coach the girls JV team. Alvirne is currently looking, Bonney said, to fill its JV boys soccer position.

Meanwhile, the Broncos have a new golf coach. Longtime coach Bob Lind , whom Bonney always would cajole to coach “one more year”, stepped down and Sy Tebbetts, who is in the Alvirne maintenance department, and is also a member of the area’s legendary Tebbetts baseball family (he’s currently an umpire).

“He always told me if the golf job opened up to let him know,” Bonney said.

Lind did a great job with the Broncos, who usually finished in the top 10 in the Division I tourney as a team and had some top five individuals.

Bonney said the familiarity with the players will be huge.

“Most definitely,” she said. “You’ve got to get moving on these kids in the off-season. Dave will be a great fit and I think the consistency will be important.”

This year there is a huge turnover in athletic directors around the state – some 18 AD positions opened up and 16 have been filled. There is only one local change, and that’s at Campbell where Jarod Mills has stepped down to return to teaching/coaching, moving to Manchester Central.

Mills is still working at Campbell in the preseason transition while Knight is up in Concord at the NHIAA offices getting training, etc.

But that is a huge turnover statewide.

“It’s a tough gig,” Bonney said. “Athletics has changed, and the landscape certainly has changed around the state.”

Now, if you can pass a quiz on all these changes known so far for the fall, kudos.

Finally, there are some middle school coaching openings for the fall seasons in Nashua; those interested should contact Gingras. South also needs a junior varsity golf coach.

Football practice, as we said, begins on Friday with the state mandated restrictions: For the first five days, outdoor practice limited to three hours, but teams can also have a one-hour walk-through, and classroom/meeting time is unlimited.

Teams can’t scrimmage until a week later. North, by the way, will be hosting a six team Jamboree at their own outdoor fields (not Stellos) on Saturday, Aug. 24.