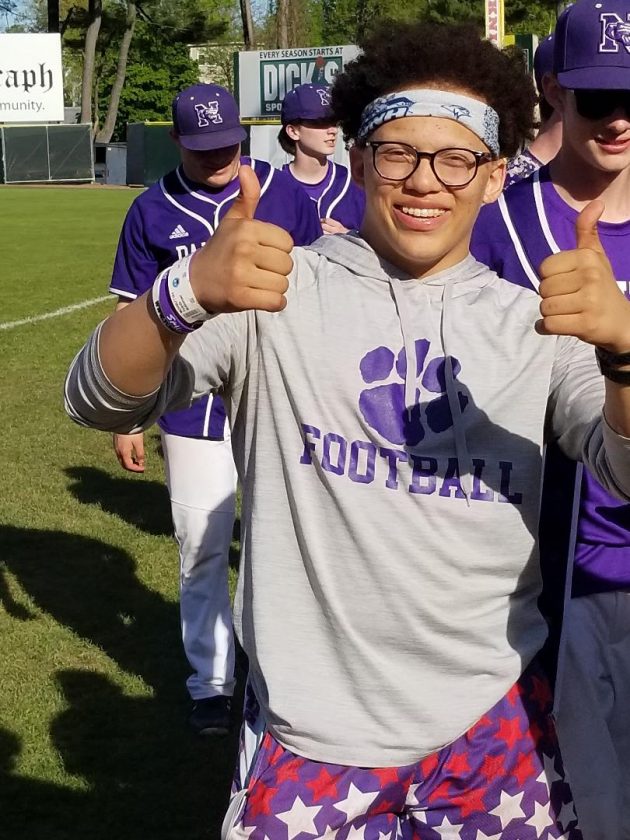 Telegraph file phot by TOM KING Former Nashua South athlete Nate Tejada has kept a positive attitude throughout his cancer treatment this spring and it's paid off as he's been medically cleared to play in today's Shrine Maple Sugar Bowl Game vs. Vermont at Castleton University.

Today’s 66th annual Shrine Maple Sugar Bowl game between New Hampshire and Vermont at Castleton (Vt.) University at 5:30 p.m. is all about the amazingly resilient young Shrine Hospital patients the game is played for.

But often some of the players involved are amazing in their own right.

Tejada’s inspirational story was well known all spring, as the superb wrestler and football player was stunningly diagnosed with Hodgkins Lymphoma in March. Treatment was going well, and Tejada was told by doctors by next winter he could wrestle for Springfield College as planned, but don’t do too much until then.

Guess what? That timetable was moved up. Tejada had surgery to remove the medical apparatus used for his chemotherapy, and last month was cleared to play in today’s game for the New Hampshire squad.

He’s still undergoing radiation treatment, so every day this past week he was driving from Nashua to Boston in the morning, then at least three hours up to Castleton, Vt.for Shrine practice, then back to Nashua at night, and all over again the next day.

“It’s kind of crazy,” Tejada said the other day. “I’m excited. Honestly, I’m blessed to be able to get back to the thrill of playing and be myself again.”

Tejada says he’s been practicing at defensive tackle and defensive end, “or wherever they need me.” He gets a little fatigued, thanks in part to the radiation, the travel, and just the fact he’s returning to a more physical regimen.

This latest chapeter in Tejada’s story just floors his teamates.

“It’s good for him,” Tejada’s current New Hampshire teammate and former South teammate Tanner Plourde said. “He’s a perfect example of who we’re playing for in this game, using our abilities to inspire the less fortunate.

“He is under unfortunate circumstances but he’s still inspiring, I think that’s the most inspirational. … He’s driving three and a half hours to Boston every night and working just as hard as us. Like, what are we doing, you know?”

Regan and Ellis both will be playing their last football games, as Regan will be studying business at Bob Jones University in Greenville, S.C.and Ellis will be going to a trade school to learn how to be an electrician.

“I’m excited I get to play in this game, but I’m kind of bummed this will be my last game,” Regan said. “So I’ll be playing very hard.”

Regan is honored to be representing Alvirne, which doesn’t normally get many players in all-star games. But last year the Broncos made it to the Division II finals. “It just shows the preparation we put in to get that far,” Regan said. “This (the Shrine experience) has been a lot of work but it’s been a lot of fun.”

Regan actually has been practicing in the secondary with the New Hampshire team; he didn’t play a lick of defense as a Bronco.

“I’m adjusting, trying my best to adjust to that,” he said. “It’s definitely different.”

As for Ellis, Broncos coach Tarek Rothe asked him during the winter if he wanted to play on an all-star team. Of course he said yes.

“I was super excited for it,” Ellis said. “I felt like my work ethic was really good, we did lots of preparation, I felt I was ready enough to play in an all-star game.”

The 6-1, 200-pound Ellis has been playing football since he can remember, so it will feel strange after today.

“It won’t feel that bad to let go, but then again it will,” he said.

Ellis had lost a lot of weight a few years ago so played mainly on the exterior of both lines. He has asthma so the weight loss, plus workouts, helped get his body into a rhythm. He knew this week would be a lot of work, but he didn’t expect a three-a-day regimen. The team, to beat the heat, began practice around 5:30 a.m., then broke for breakfast at 7, then another at 8 a.m., and then the last one at 6:30 in the evening. In between there were classroom sessions.

“My body is completely sore right now,” Ellis said the other day with a chuckle.

Vermont will be going for its fourth straight win over New Hampshire after winning last year’s game 24-13. At one point New Hampshire owned a 15-game winning streak. Last year’s game was played mainly under the lights after being delayed by lightning, but the forecast as of Friday was calling for sunny skies and only a 20 percent chance of rain in the Castleton area.