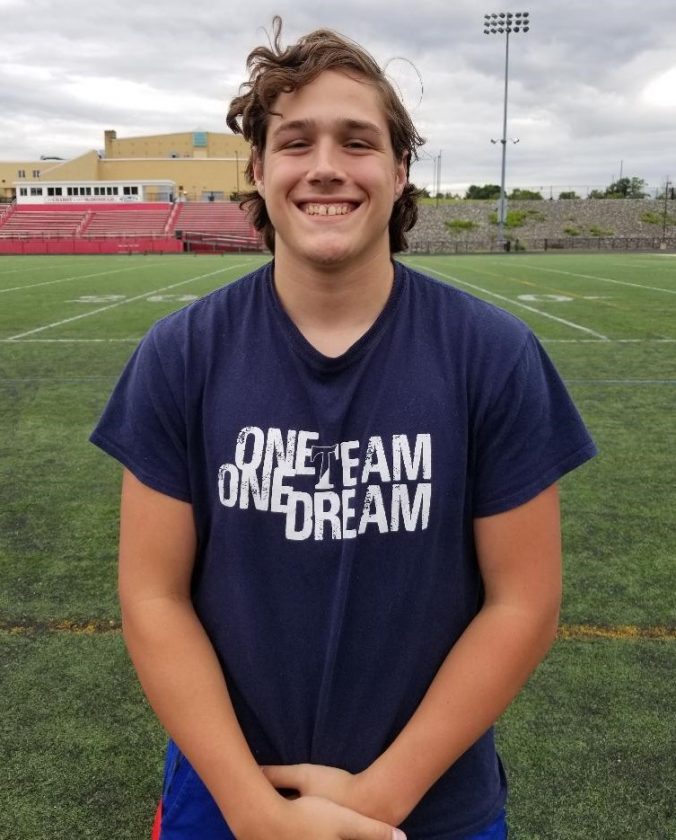 In today’s annual CHaD East-West All-Star Football Game at the University of New Hampshire, former Nashua High School North running back Brian Montminy may be just the guy to do that for the West squad.

After all, that’s what he did the last couple of years with the Titans.

“I liked the aspect of the team when I could get the hard yards,” Montminy said. “Two or three yards up the middle, when we needed it the most. First downs.”

Defensively, Montminy played multiple positions during his Titan days. He was a free safety, then an outside linebacker, and sometimes even on the line. “I had fun playing defense, too,” Montminy said with a grin.

Montminy didn’t mind sophomore running back/quarterback and eventual Telegraph Player of the Year Curtis Harris getting all the ink.

“I’d say we worked well as a team,” he said. “When I was lead blocking for him, we’d just open up some holes and he’d just take off and score. I think it was a good package deal.”

“I didn’t want to be the standout player,” he said. “Instead, I wanted to help out the team more, the person who was doing the little things the most.”

Montminy liked the strong safety/outside linebacker position the best, as he was covering some of the opposition’s best skill position players.

“He’s obviously a talented football player, on both sides of the ball,” Concord and West Squad head coach Eric Brown said. “We’re not sure where we’re going to put him, but he’s bigger than I thought he would be.”

The North contingent that’s on the West Squad will be together in the fall as well. Montminy, receiver Austin Ouellette and lineman Harley Ciardi will all be headed to the University of New England in Biddeford, Me. Ouellette and Montminy are set to play as freshmen while Ciardi plans on taking a year off and hopes to play the following year.

“I like the comaraderie we already have, going into the season having played with each other,” Montminy said. “I feel like we’ve been playing since the third grade, fourth grade, we have a lot of chemistry together.”

That’s a lot of football for Montminy. As much as he shuns the spotlight, it was on him when he was one of the selections.

“I’m very honored to play in the CHaD Game,” he said. “As much as everybody else I feel as honored with this game. I want to stand up for the CHaD kids, be a name for them, do good for them, and also raise the money for all who need it.”

Montminy will study sports management in college. One of the things a good sports manager/administrator always does well are the little things.

North has four players on the West squad, the fourth being lineman Garrett Hillard, whose Mom passed away of cancer a few year ago.

“It should be fun, I’m excited,” he said. “It’s good this is for a hospital. She went to Mass. General, and they helped us a lot, hopefully we can get back to the kids. It’s going to be fun.

Hillard will attend Springfield College but not join the football team until after the season, as he was a later applicant.

Ouellette says he’s thrilled to be playing with Montminy and hopefully Ciardi. “It’s fun to keep on playing with the same people from elementary school,” the receiver said.

“I’m kind of looking forward to the break, but I’m sure I’ll miss it once the season starts.”

He’s thrilled to be in this game.

“I feel honored,” he said. “One last ride with the guys I’ve been playing with.”

Former Nashua South linebacker J.J. Arnesen is also on the West squad, and if some may remember, he thought the Thanksgiving Eve Game would be his last football game – or this one.

Guess again. Arnesen is studing Hvac and most schools that specialize in it don’t have football, so he was resigned to that fact. But his HVAC teacher at South found him one – Hudson Valley Community College in Troy, N.Y.

And he loved it.

“It’s awesome,” Arnesen said. “It’s worth going a little farther away, three hours. I can’t wait. Two more years of football, and what I want to study. It’s a perfect fit.

“It’s a big school, it looks like a four-year school. I sent my tapes and they pretty much got me there (for a visit) right away. I toured the campus, saw everything and fell in love.”

Arnesen will likely play middle or outside linebacker at Hudson Valley, as well as special teams.

Players are nominated and selected for the game, but sometimes coaches want to be on the CHaD staff, too.

That was the case with Souhegan coach Robin Bowkett. When Brown got tabbed as the West head coach for the second straight year, Bowkett reached out to him.

As for Brown, this is his third year as a CHaD coach, these two as head coach and a stint as an assistant under Jim Schubert in 2012.

He likes this collection of top players.

“Really pleased when we first met,” he said. “Good size, they seem like all good kids and they’re really enthusiastic. And when we visited the hospital, it put it all in perspective. They know why they’re here.”