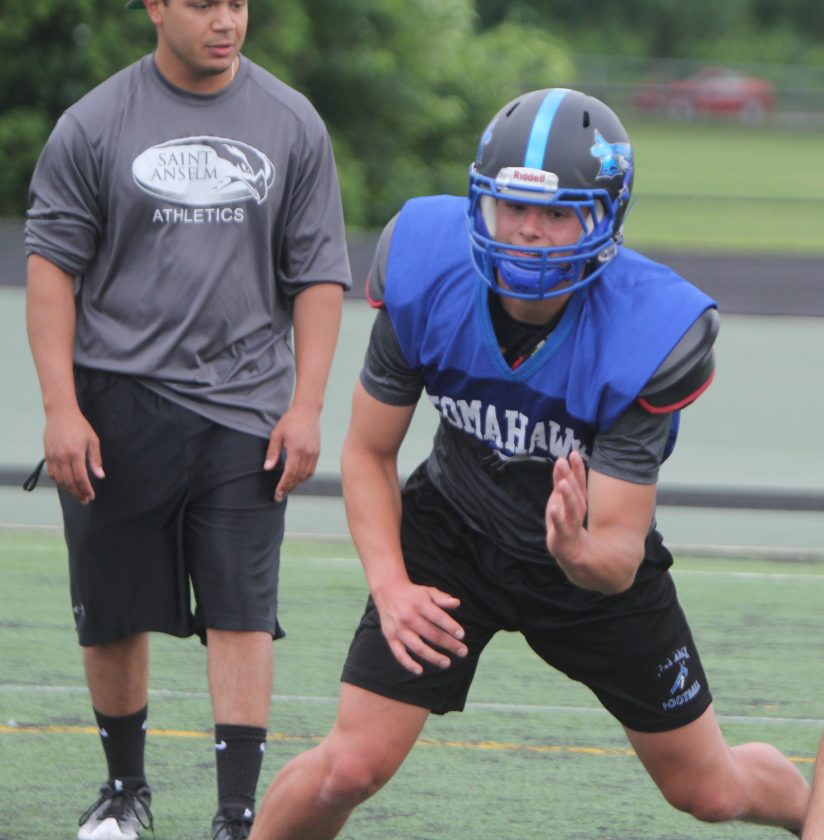 MANCHESTER – Let’s head back in time to the Merrimack household of Jordan Petrocelli, when he was trying as a youth to decide between playing baseball and lacrosse.

“My Mom told me that baseball was too boring,” Petrocelli said, “so I should try something else. So I chose lacrosse.”

Now, that would be no big deal, except for one thing: Jordan’s grandfather is none other than former Boston Red Sox standout infielder Rico Petrocelli, who has been a great ambassador for the team and the game in New England, and who lives in the Nashua area.

“I took to it right away,” said Petrocelli of lacrosse, a sport he was a standout at with Merrimack on attack.

Lacrosse also gets the nod over football, which means that Saturday’s annual CHaD East-West All-Star Game at the University of New Hampshire will in all likelihood be Petrocelli’s last football game. He was a standout defensive end and slot receiver for the Tomahawks during the 2018 season, and a pretty good one at both positions.

Petrocelli is looking into going to Rivier to play lacrosse, as Raiders coach Jay Delanoy has recruited him. If not Riv, he’ll go to Nashua Community College for two years, and then transfer. “It’s probably the cheapest option,” said Petrocelli, who wants to study business.

Petrocelli credits his grandfather with creating a great work ethic for him to succeed.

“He’s really just helped me with focusing on how hard you push yourself,” Petrocelli said, “and that the process is more important than the product.

How does it feel to have a New England icon in the family?

“He’s still my grandfather,” Petrocelli said. “I’d never seen him play, so I’m sure other people look at it differently than I do.”

Still, there are perks.

“It’s really cool to be able to go down to Fenway with him once in awhile, and get the experience,” Petrocelli said. “Takes me into the locker room, etc.”

Meanwhile, Petrocelli preferred defensive end to anyplace the Tomahawks had him play on offense.

“I just liked tackling,” he said with a grin. “Coming off the edge, you feel like you’re always fighting for something. On offense it’s yards, or fighting to reach someone on a block.

“But I feel on defense I feel like you’re really just trying to get the edge over the person in front of you.”

Petrocelli’s parents not only steered him away from baseball, but they kept him from playing football until he was a high school freshman.

“All that time, I finally got to do it freshman year, and I didn’t look back,” he said.

Well, almost. The 6-1, 205 pound Petrocelli admitted he wasn’t going to play football for the Tomahawks his senior season.

“I kind of wanted to have my senior year,” he said, “but I realized that was kind of stupid because all my friends played football.”

His friends talked him into it, so he went to all the summer skill sessions (7 on 7 games,etc.). Petrocelli was back in the fold and a good thing, too, as he had a productive senior season.

He’s honored to be playing in the CHaD game but was surprised ‘Hawks coach Kip Jackson nominated him along with fellow Tomahawks Ben Eichman, Tristan Wood and Adam Thornton.

Petrocelli was one of those. Same with lacrosse.

But just how good would the athletic Petrocelli have been on the baseball diamond?