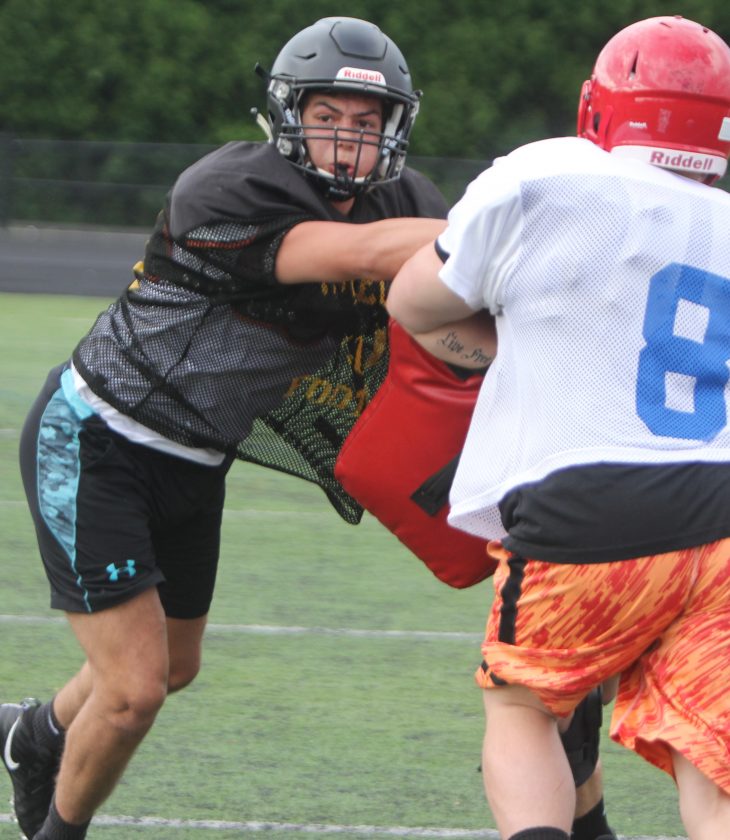 MANCHESTER – It’s all in the family.

Yes, Souhegan High School alum Ries Gronstra’s opportunity to play for the West squad in this Saturday’s annual CHaD East-West All-Star Football Game at the University of New Hampshire is almost like a family tradition.

That’s because his older brother Luuc, who was himself a CHaD patient, played in the game a couple of years ago.

“It’s pretty special,” said the All-State former Saber lineman. “It’s something special to play in this game, it’s like a legacy item, since he played in it and (CHaD) has affected my family. It’s awesome to play in it.”

In fact, Gronstra will honor his brother, who was treated at CHaD for Crohn’s Disease and ulcerative colitis and is now going to be playing football at Norwich (after first attending Saint Anselm) by wearing the same number Luke had in this game two years ago, #70.

“It’ll be pretty awesome to carry that along,” said Grondstra, who hails from Mont Vernon.

The two played together in a couple of games for the Sabers during Ries’s sophomore year on the line. Luuc was left tackle, and Ries was left guard.

“It was awesome,” Ries said. “Counter plays, we’d pull together, it was like a dynamic duo,” he said. “He was just as thrilled (about CHaD) as I was, saying it’s an awesome game, and awesome cause.”

Ries Grondstra was always a lineman from his days in youth football, guard, tackle or center. He’s been a center for the last three years.

“I get to touch the ball as a lineman,” he said with a grin. “No one else (on the line) does. The quarterback gets all the fame with the ball.”

Plus, as a center you have to know the different snap counts, plays, etc.

“There’s definitely a lot going on in your head, I like that aspect, too,” Grondstra said. “You get to know everything, and you’re one of the smarter lineman on the field.”

“Reis had an awesome senior year, both sides of the ball,” said Souhegan coach Robin Bowkett, an assistant on the West team. “The team elected him captain just with his work ethic and leadership skills and he really came on as a football player. Great improvement from his junior year.”

And Grondstra loved playing for Bowkett.

“He’s an emotional coach,” he said. “Our program definitely got revamped up when he came along.”

Sadly, Saturday will be the talented Gronstra’s last game, as he’s headed to the University of Rhode Island. He’s not sure how he will feel.

“I felt pretty upset after losing to Plymouth (in the Division II semis), thinking that was my last game before I got picked for CHaD,” Grondstra said. “But once I found out I was on the CHaD team, that (feeling) went away. I guess we’ll find out when the game’s over, you know?”

For now, the good feeling of just being involved in the game will dominate his thinking.

“He’s just really excited and appreciative of being here, being with some of the state’s best,” Bowkett said.

After all, playing in the CHaD Game has become a family tradition.