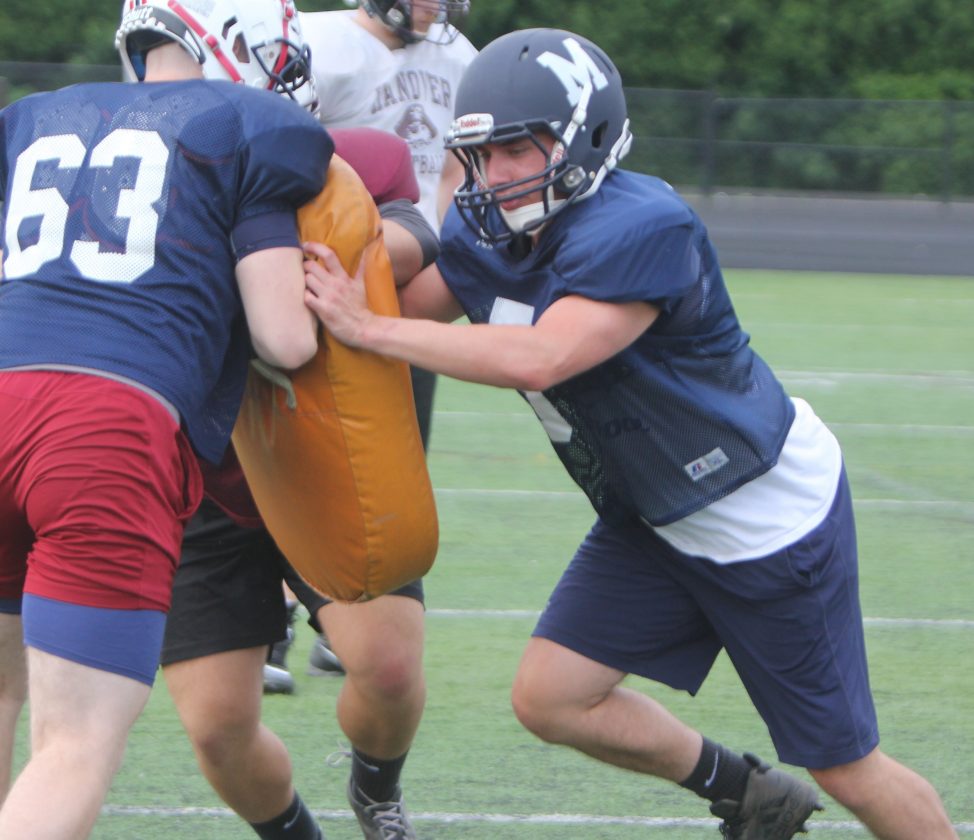 Telegraph photo by TOM KING Milford's Alex Taylor has a big attachment to the cause the CHaD East-West All-Star Football Game represents.

In one envelope came his first college acceptance letter, this one from Plymouth State.

The other? It was a notification that he had been selected to play in this Saturday’s annual CHaD East-West All-Star Football Game.

“I was out with the guys from the (Spartans) football team that day,” Taylor said. “Then my Mom texted me and said ‘You’ve got something in the mail.’

“So I said ‘Cool’ and went home and she handed me the Plymouth thing, and that was really exciting and then after that was the CHaD thing. I was even more excited for this than I was for the Plymouth (mail).”

And there were a couple of reasons for that. First, he ended up selecting to go instead to Southern New Hampshire University in the fall. But second and more important, CHaD has played a significant role in Taylor and his family’s lives.

Taylor’s mother was diagnosed with breast cancer when he was in the fourth grade, but with help from the care in Lebanon, she has recovered nicely and is a 12-year breast cancer surivor.

But Taylor has had help from CHaD on a couple of fronts. He had academic problems early on in high school but after being diagnosed with ADHD, treatment helped him raise his grades to close to a 3.0. Also, he had an issue with his small intestine a year ago, and CHaD care helped him immensely.

“So they’ve definitely helped the family out,” he said. “This means a lot. Everything that Dartmouth did for both my Mom and me and my family, we got the treatment without being in a ton of debt which is a common thing these days. So we appreciate everything they did. It means a lot to be here today.”

And that’s why his Mom cried “a little bit” when he opened the mail that day.

Taylor, at 6-1, 195, has played offensive line and defensive end for the Spartans for four seasons, culminating in an All-State selection for offense. But he loves defense more.

“I hope to play defense (in the CHaD game),” Taylor said. “But anywhere the coaches want to put me, I’m fine. I don’t care if I’m special teams, too.”

Taylor, at xx-xx, doesn’t have the typical lineman build, but that gives him quickness others don’t have.

“It definitely helped,” Taylor said. “You don’t have to get into an up-front fight with someone if you can get around them, you know what I mean? So what I lost in size, I made up for it just being able to get around people and get off the ball faster.”

Taylor said he wouldn’t make any All-Hands team, so he got labeled a lineman on offense “and I had fun protecting the other guys.”

Taylor cherished his days at Milford, saying the intangibles he learned while in the program under coach Keith Jones were invaluable.

“I learned more just about being a person than I did about football playing for Milford,” he said. “Jonesie always talks about leaving the community better than you found it.”

So much so Taylor eventually wants to give back to the community and have a career in law enforcement. But he’s getting a head start by being a volunteer part-time firefighter in Milford.

“It’s exciting, it feels good to give back,” said Taylor, who began the interview process in the winter and got approved in early June and is currently in training.

“I’ve been to a call or two but nothing exciting,” he said. “We’ll see what happens.

“It helps to know you can be there to help somebody get out (during a fire) and try to protect their property and stuff like that. It’s really life saving.”

But there’s also the idea of being part of a team that appeals to Taylor.

“You have that group of brothers in football and you lose that when high school is over,” he said. “And then when you join the Fire Department you have all these brothers again.”

Taylor chuckles when he says he is “well aware” he is suddenly stepping into the real world after his high school graduation. Is it possible working as a firefighter may steer him away from law enforcement, which he’s always thought would be a “fun way” to give back to the community?

“I don’t know yet ,” he said. “I’ve got four years (to figure it out). If I want to go full-time fire, I can go full-time fire. I’ve always wanted to be a cop so I feel like I’d be cheating myself if I don’t try it. If I try it and don’t like it, I can always stick with fire, who knows?”

But first, Taylor knows that Saturday’s game at the University of New Hampshire for the West Squad will likely be his last football game ever. That, besides his CHaD ties, will be emotional; he’s played since the sixth grade after his parents finally gave in and allowed him to play, and he fell in love with the game.

“I haven’t forgotten that,” he said. “I just want to make as much of it as I can, help where I can help and be there for everybody.”

And playing in the CHaD Game is a great way to do it.

“I’ve had friends who have played in it, and that’s always been the goal but I didn’t know if it would ever happen,” he said. “It’s the All-Star Game, but it’s not about who goes.

“It’s about what it’s for. It means a lot, absolutely.”