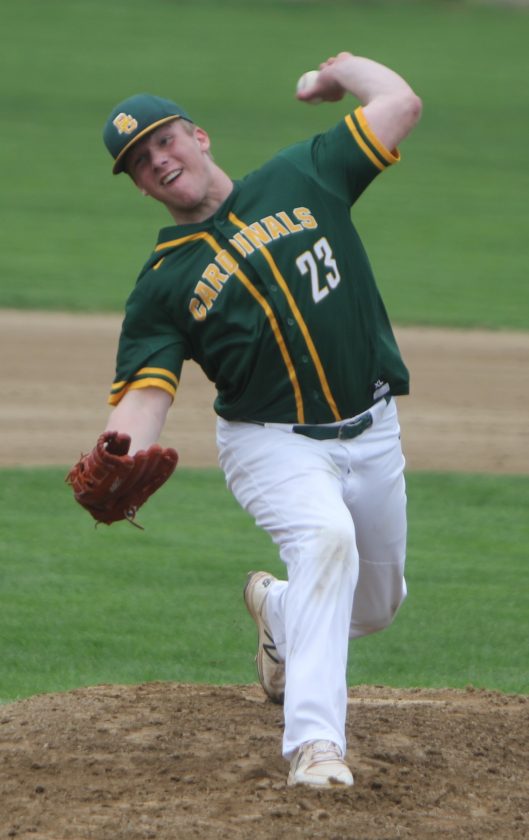 Folks who gripe and grouse about today’s teenagers having too many distractions and side-interests taking them away from the good old fun of “going outside to play” need to know that there are young men who take their baseball seriously enough to not in fact want a break from it when summer rolls around.

Among that number are the players on the Nashua area’s two Senior American Legion teams, the District A Merrimack Memorial Post 98 hardball crew and the District B Nashua Post 124 contingent.

The Nashua squad includes players from all three Gate City high schools as well as several from an excellent 2019 Hollis Brookline team, and coach Tim Lunn will be keeping his deep bunch busy with a total of more 40 games including their 17-game New Hampshire Legion slate.

Lunn has been working with Nashua Legion for seven seasons, including three as the head coach. Post 124 went a strong 11-5 in the Granite State regular season under its mentor last summer, nabbing the third seed and qualifying for the state tournament. Alas, the locals made a quick exit from that prestigious, double-elimination tourney following early-round losses to Lebanon and Concord.

But the coach and his crew have loads of reasons to feel excited and optimistic about their potential fortunes for this summer.

“This is probably one of the best teams I’ve had. It’s definitely the deepest from (players) one to 18,” said Lunn. “We have 10 or 11 pitchers and lots of versatility, and the depth and versatility we have allow me to do a lot in the field.”

Where some state Legion programs have had difficulty maintaining strength – or even staying active for that matter – coach Lunn is extremely thankful to have a prime group of dedicated players for this summer.

“We have lots of high-character kids with high baseball IQ’s, and they really want to work hard and win,” said Lunn.

Mike Henzley’s Merrimack mob enjoyed an excellent District B season and state tourney last year, and it has been moved into District A for this summer.

Post 98 – which will play an 18-game New Hampshire regular season between now and late July – went 11-5 during its 2018 regular season before making it all the way to the state championship round against Rochester last summer.

Merrimack defeated Concord in the early going, then lost to Lebanon before rebounding with successes against Laconia, Concord and Lebanon before being bested by Rochester in the title game.

The 2019 Merrimack crew is less seasoned than the 2018 edition was. But coach Henzley is more than a little enthused about the bunch he has wound up with for this summer.

The team includes standouts from Merrimack High, Milford High, Bishop Guertin, Souhegan, and Trinity as it aims to make waves in its new district, which includes Concord, Keene, Laconia, Lebanon, Sweeney Post of Manchester, and Weare.

“We’re definitely a young group. Last year was a very mature team, and we lost eight kids from that team,” said coach Henzley. “But this is a good group. Most of these guys have played at the high school varsity level and can play ball.”

The Granite State Legion regular season runs from now through July 25, with the state tournament right here in Nashua at Holman Stadium from July 26-30. The top four teams in each of the two districts qualify for that major event.